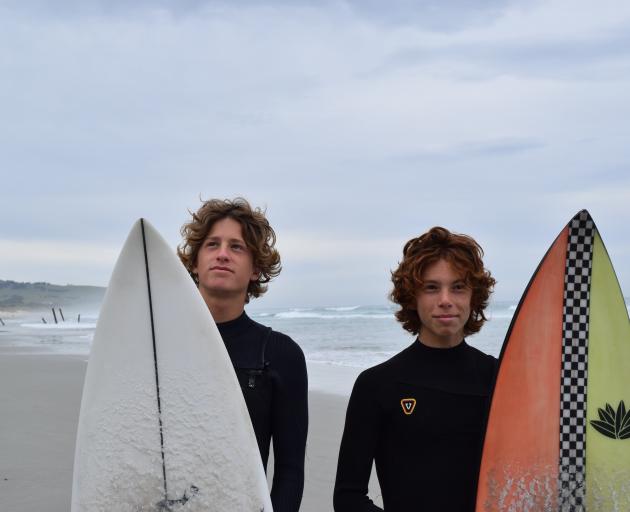 Friends Luke Rogers (16, left) and Kahu Kaan (15), both of Dunedin, head out for a surf at St Clair yesterday. PHOTO: SHAWN MCAVINUE
Summer is set to be a scorcher in Dunedin, following a warm and dry spring, Niwa says.

Niwa forecaster Nava Fedaeff said Dunedin was forecast to be hotter than usual this summer as a moderate La Nina weather pattern was expected.

Air pressure was forecast to be higher than normal over and to the southeast of the South Island and lower than normal to the northwest of New Zealand, a pattern associated with northeasterly air flow anomalies.

"For Dunedin that means that above average temperatures are expected for summer but also normal or below normal rainfall amounts."

A La Nina pattern could also result in warmer than average sea temperatures.

Unusually warm seas in other coastal regions may develop into a marine heatwave over summer.

Dunedin surfer Luke Rogers, of St Clair, said the possibility of a marine heatwave was good news as the sea would be warmer for surfers and he could wear a thinner wetsuit.

However, he would surf in any sea temperature, he said.

Miss Fedaeff said spring was warmer and drier than normal in Dunedin.

The spring mean temperature at Musselburgh was 11.8degC — 0.9degC above average.

"Which makes it the third warmest spring on record there since records began in 1947."

Fire and Emergency New Zealand changed its fire season status to restricted for the Otago region on Tuesday.

This means a permit is required to light a fire outdoors.

The long-term forecast for Otago was for warm weather.

"Although there is some rain predicted, it will not be enough to keep up with the summer drying that occurs.

"If you get a permit to light a fire this summer, be vigilant.

"Always check the weather conditions to ensure there are no strong winds forecast."