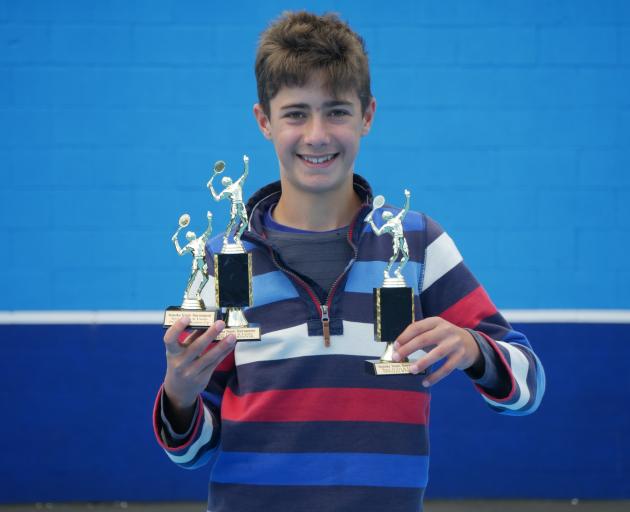 Mornington Roslyn Tennis Club member Mathew Campbell (12) has had a successful few weeks competing in tournaments around the South Island. PHOTO: JESSICA WILSON
Mathew Campbell has been enjoying a summer of tennis.

Plus the experience and success that comes with it.

The 12-year-old Mornington Roslyn Tennis Club member has competed in a handful a tournaments these school holidays.

The first tournament was the Tennis Canterbury Christmas Classic 2021, held in Christchurch, in which he finished second in the 12 and under section.

Earlier this month, he had more success at the Wanaka Junior Open where he won the 12 and under singles and doubles.

He won his first singles match 6-0, 6-0 which allowed him to get into the rhythm of the tournament.

"My semi-final and final was a lot closer.

In the doubles, he was paired with Nicholas Rayner, of Christchurch.

Partners are drawn at random so while they met at a tournament the week before, it was the first time they had played together.

"It was really lucky because I was the first seed and he was the second seed," he said.

"We were a good team, we were quite strong."

Playing doubles was completely different from singles — matchplay was quicker, it was tougher and more people were watching, he said.

Mathew wanted to keep his standards up and play well not only for himself, but also Nicholas.

He also competed in the 14 and under category and finished third in the singles and second in the doubles, paired with Hugo Barsby, of Dunedin.

A few days later, he finished third in the Queenstown Junior Open 14 and under singles.

"It was really tough."

The decider for third and fourth was against Sebastian Hsieh, of Auckland.

Both players each won a set, which meant they had to play a "super tie-breaker" in which the first player to 10 points wins the match.

"When I played him I was quite nervous because he was a much higher rank than me.

"He’s incredibly strong so I just had to hustle as much as I could."

Mathew eventually won the tie-breaker set, 13-11 (players have to win by two points).

Later, he was back up to Christchurch, this time competing in the Tennis Canterbury Summer Tournament 14 and under singles and doubles.

The tournament was tougher and attracted the best players in the country, he said.

Mathew finished eighth in the singles and fifth in doubles and was pleased with his performance, especially since many of the matches were close.

The Rudolf Steiner School pupil has enjoyed his summer of tennis.

"I think I improved a lot.

"I started hitting harder shots and not really holding much back.