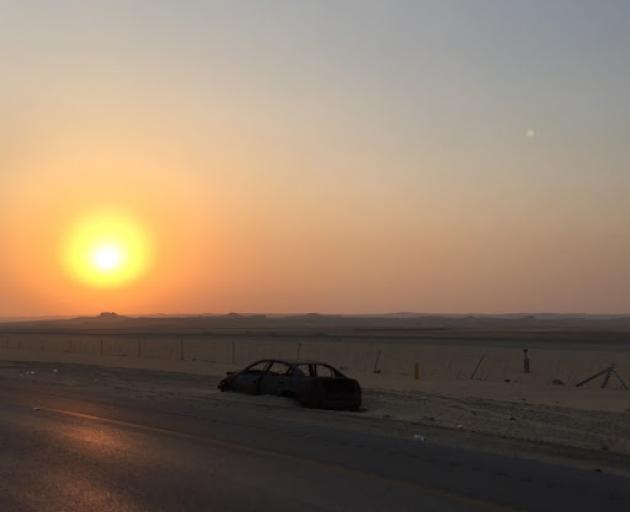 An abandoned car in the desert. Photo: Deborah Heron
While Aucklanders may visit the island of Waiheke for a break from city life, people in Riyadh go a mere 500 kilometres to the island nation of Bahrain.

The kingdom is a firmly Muslim country, but unlike Saudi Arabia you can buy pork in special rooms at the back of a few supermarkets. Going into a ‘pork room’ is reminiscent of going into the R18 section of the old video shops, you know it's legal but you feel very shady!

Unlike Saudi Arabia, alcohol is also available in some restaurants and hotels. It may be a drive of up to seven hours with border checkpoints and immigration but it is a popular destination as people go away for parties and Friday brunches. 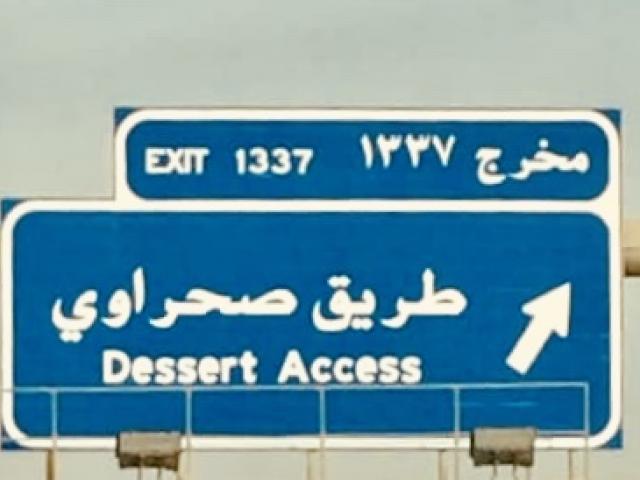 The journey itself is through a desert, or as some signs say, a ‘dessert’. This normally triggers a series  of bad puns when we see them i.e. “the drive is a piece of cake” and ‘thanks for pudding up with us”!  There are some service stations along the route and you soon learn which ones have western style bathrooms rather than a ‘hole and hose’.

As usual you see camels along the way, and you will occasionally be overtaken by them, while they ride in the back of a ute!

There is also a rather incongruous abandoned Ferris wheel halfway along the route.

We always try to time the journey so it is entirely in daylight as visibility can drop dramatically when a sandstorm comes in. At night it can be very cold and being pitch black it is a very hostile environment. If you break down on the way from Dunedin to Waipiata, at some point someone will stop for you and you can ask for help. On the desert highway people will also stop to help, but the chances are that they won’t speak a word of English and straying from your car by yourself could be fatal as it is easy to get lost in the dunes. While at home we have gravel piles along the Pig Route for gritters, along the desert highway you see many bulldozers to clear the shifting sands.

The Ferris wheel which marks the halfway point on the trip from Saudi Arabia to Bahrain. Photo: Deborah Heron
At the border you arrive at the 25km King Fahd Causeway which is an incredible feat of engineering. Half way along is an artificial island called Middle Island, but  before you criticise the originality of the name, think of us with North and South Island. Once there you go through border and customs checks from both countries. These are far more stringent when returning as they look for contraband such as bacon and pork sausages.

Camels ride in the back of a ute on the highway. Photo: Deborah Heron

My wife spent time as a young girl in Bahrain as her father was in the Royal Navy. The country has seen huge changes in the intervening years. The causeway has made it far more accessible and the city has many new artificial islands and is home to major events such as the Bahrain Grand Prix.

Bahrain makes a great destination for a weekend break and we visit three or four times a year. Especially as there are no visa issues if we want to meet up with family and friends.

A weekend in Bahrain will be the subject of an upcoming article.

Former Otago man Peter Heron at the 'Edge of the World'. Photo: Deborah Heron
- Peter Heron was principal of Maniototo Area School from 2007-2010 before moving to become Head teacher of an Auckland high school. After this post he left New Zealand in 2015 to become the high school principal of one of the most prestigious schools in Riyadh, Saudi Arabia. This school has 1600 students from 70 nationalities aged 4-18 and has over 20 New Zealanders in its staff including its principals and owners.
Peter and his wife Deborah have a home in Waipiata and in this blog he aims to contrast life in Saudi Arabia and Central Otago.
Comment now