Three Kiwis and a South African at the Princess Souk. Photo: Deborah Heron
Former Otago man Peter Heron journeys into the sights, smells and colours of Saudi souks in Riyadh where bartering is a skill and roaming through the stalls at night is an adventure in itself.

The shopping in Riyadh has two very different flavours, on one hand there are huge malls where a westerner would feel totally at home, and on the other there are the rich and colourful souks where bartering is a skill and a pastime in itself.

A souk can be an intricate maze of shops that follow a general pattern, for example the Gold Souk, the Date Souk, the Fabric Souk and the Carpet Souk. This souk theme carries over into small shops so that you will find clusters of similar businesses in the same area. We have visited souks in Istanbul, Cairo and Bahrain as well as Riyadh. Imagine going to a farmers’ market and squashing the stalls together so that they are arms length apart from their neighbour across the passage. Mix this with a touch of Arabian Nights and then throw in the challenge of negotiating a price for every item.

The date souk in Riyadh. Photo: Deborah Heron
The evening is the best time to go shopping, the souks generally stay open late although they close regularly for prayers. These take place throughout the day and we all therefore have the ‘Prayer Apps’ on our phones. In the evening the temperature can drop 10 degrees into the mid-30s and this makes meandering through a souk looking for bargains easier. Local women cook food on small stalls if you fancy a tasty snack as you shop.

Jewellery here is sold by the weight rather than workmanship and visitors can pick up some real bargains in the gold souks. Our favourite is the Al-Zal (Carpet) Souk near the Mamsak Fortress by "Chop Chop Square" (don’t ask about the name)! This 40,000 meter square souk can trace its history back to 1901, to the start  of modern Saudi Arabia. Masmak Fortress is the place  where, in 1902, the kingdom’s founder and a small band of his companions captured the governor and announced the return of the Al Saud family.

Mint tea, coffee and dates. Photo: Deborah Heron
This therefore has great historical significance locally and is an area where you could be asked to tell your wife to cover her hair. There is a great cafe where you can sip mint tea or Turkish coffee with a handful of dates. I also visit a nearby tailors who will make shirts to measure at a good price, although Debbie will get a better one if she is with me!  Another popular souk is ‘Princess Souk’. This stocks second hand goods and our female staff can buy ball gowns for as little as NZ$12. Ball gowns in Saudi? The Embassies here are a real social hub and there are many black tie events which give our staff the opportunity to dress up and party! 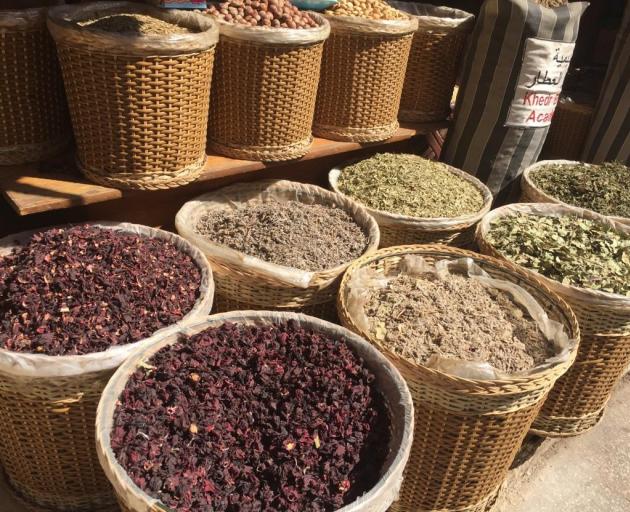 On display are an array of spice in the souk. Photo: Deborah Heron

The etiquette is that you only barter if you are willing to buy an item for the right price and Debbie's general rule is to offer 20% of what they first ask for and then walk away, if they follow you more than a few paces there is a chance of a deal! The shopkeepers want you to buy, but they also want to sit and talk and practice their English. There is no sense of urgency and they will often offer you cold water and refreshments. The Spice Souk is special treat in itself as you are given samples and the smell is rich and almost tangible. 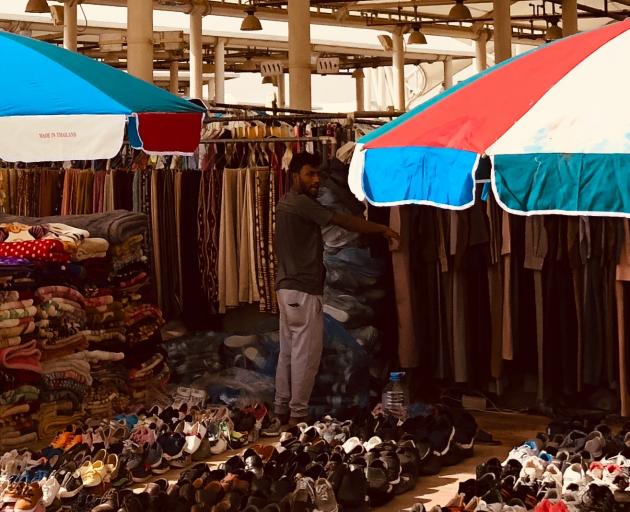 A shoe seller at a souk in Riyadh. Photo: Deborah Heron
There are often no real roads in the souks and you do feel like you have stepped back into another time as you walk through a warren of interlinked alleys. The older part of the souk has swords, carpets and oud. Oud is a form of incense and people will blow it on you at events, this can be disconcerting the first time it happens!  There are easier places to shop but a trip to souk is an adventure in itself.

Former Otago man Peter Heron. Photo: Deborah Heron
- Peter Heron was principal of Maniototo Area School from 2007-2010 before moving to become Head teacher of an Auckland high school. After this post he left New Zealand in 2015 to become the high school principal of one of the most prestigious schools in Riyadh, Saudi Arabia. This school has 1600 students from 70 nationalities aged 4-18 and has over 20 New Zealanders in its staff including its principals and owners.