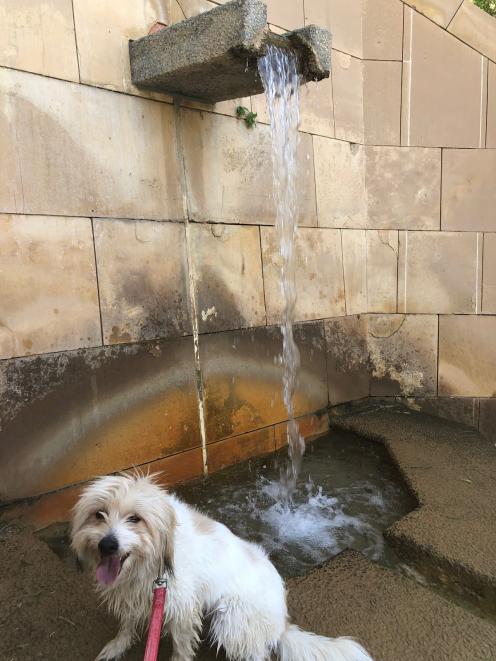 In the Middle East dogs are not seen as friendly pets, instead children are taught to fear them as they may carry diseases and are often feral.

Within Islam itself dogs can be perceived to be impure, but this is open to interpretation. Nevertheless the Bedouin often keep them as watch dogs and they appear in ancient petroglyphs in the desert. Like our Maniototo sheepdogs they are working dogs but unlike them they are not herders.

Within the cities some people now have traditional ’pet’ dogs,  but the owners are mainly expatriates. We have gained Floki, a schitzu-terrier cross after two of our New Zealand colleagues found that two male puppies together were dynamite and needed to split them.

The first challenge for us is finding dog food. Some supermarkets may stock a bag of dried food, but to find dog food cans (my wife insists on spoiling the puppy),  took me five supermarkets and two pet stores - surprisingly even the first pet shop I visited only had biscuits.

One of the shops though had a novel hair product - Camel Urine Oil! The second challenge is the daily walk. In the summer this is just not feasible during the day and would probably be unsafe for your pet as we often go up to 54degC.

As you can imagine this can cause burnt paws and heat stroke. Also in public spaces outside compounds, dogs can scare people and it would be unfair to take them to a park. We therefore walk Floki after sunset and he does laps of our Western compound.

There are huge amounts of feral cats in the city and many of us have ‘garden cats’ who we feed. We don’t own a cat but ‘Stephanie, the Garden Cat’ thinks we do.

Even to the point where we pay someone to feed the cat we don’t own when we are on holiday! Our school helps run a compound charity which TNRs  (traps, neuters, and releases) the strays which stops other cats moving in. This is relevant to the walk as one corner of the compound seems to be a cats’ gathering point and Floki finds himself intimidated by the group of felines who hang around this area like delinquent teens.

The Diplomatic Quarter (DQ) in Riyadh has a 13 km walking track around its outskirts and this is liberally scattered with small parks and fountains. Photo: Deborah Heron

Winter is far more exciting for Floki as temperatures can fall to below twenty. The Diplomatic Quarter (DQ) in Riyadh has a 13 km walking track around its outskirts and this is liberally scattered with small parks and fountains. Also in the DQ women don’t have to wear abayas which is more conducive to walking in the heat.

Our dog, like most family pets, thinks that he’s human and likes nothing more than a cuddle and gardening (unfortunately). He has been a welcome addition to our Saudi family.