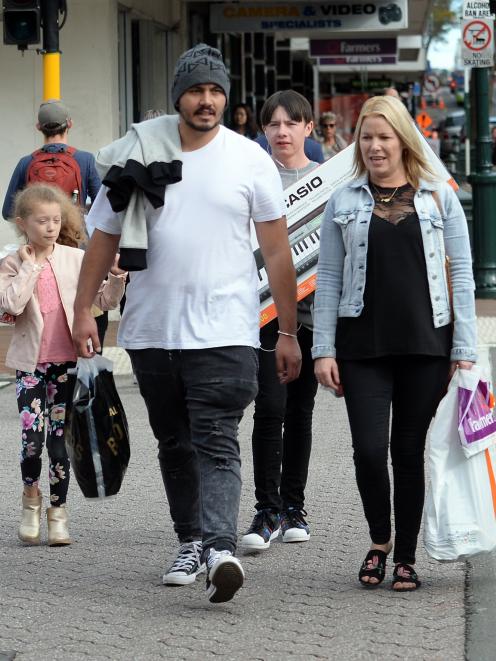 Shoppers in Dunedin's George St. Confidence in the retail sector was affected by a rise in the minimum wage and the abolition of the 90-day trial period. Photo: Linda Robertson
Weakening business profitability and rising labour costs appear to be underpinning expectations that economic conditions in the months ahead are deteriorating.

Although general business confidence was in the doldrums, businesses had, for the quarter to March, reported a rise in demand and expectations demand would continue.

In the latest New Zealand Institute of Economic Research survey of 4300 businesses, in its quarterly survey of business opinion, principal economist Christina Leung said businesses were gloomy as costs rose and profitability got squeezed.

She said business confidence had fallen sharply in the quarter to December in the wake of the Labour-led Government taking office.

``This pessimism has carried over into the first quarter of 2018,'' Ms Leung said.

Other economists were less stinging, saying the survey showed confidence and activity ``held up relatively well'', or improved, ``but only a touch''.

Otago Chamber of Commerce chief executive Dougal McGowan said around the country there was a short-term weakness in the construction sector.

``[However] this is not fully representative of Otago, where consents and future large-scale construction is on the horizon and are seen to be positive,'' he said.

Business activity nationally remained strong and there was a slight improvement in business confidence outlook, which in Dunedin had been driven by recent and future large events, he said.

``Recent talk of [Chinese-American] trade tariffs are important to many of our exporters and will be watched with key interest,'' he said.

He noted that in some sectors it appeared businesses were yet to pass on increasing costs to customers.

``Business confidence has improved in the March quarter, but only a touch,'' she said in a statement.

The volatility in the quarterly survey of business opinion had been less than we had seen in monthly surveys of business confidence, she said.

Ms Boniface said there were some signs of moderation of inflation pressure.

``Fewer firms expect costs to increase over the next three months, with 33% of firms expecting costs to rise, down from 40% in the previous quarter,'' she said.

ASB senior economist Jane Turner said the survey on activity and confidence ``held up relatively well''; albeit ``weak'', it was less pessimistic than the monthly ANZ business opinion survey.

``The NZIER survey points to a modest slowdown in growth, as the uncertainty associated with a change in Government continues to weigh on near-term activity,'' Mrs Turner said.

`` However, the construction sector does appear to be losing confidence amidst tight capacity pressures and falling profitability, and points to some risk of a sharper fall in commercial construction than we have allowed for,'' Mrs Turner said.

NZIER's Ms Leung said the continued weak profitability appeared to be a key contributor to pessimism and businesses were not optimistic that would improve.

``Cost pressures have intensified, and businesses have not been able to fully pass these on in the form of price increases,'' Ms Leung said.

She said confidence in the retail sector had been particularly weak since the present Government took office.

That was likely reflecting that a large proportion of the retail workforce was low-waged, which meant retailers were more likely to be affected by the lift in the minimum wage and the abolition of the 90-day trial for new employees; for businesses with more tan 20 staff.