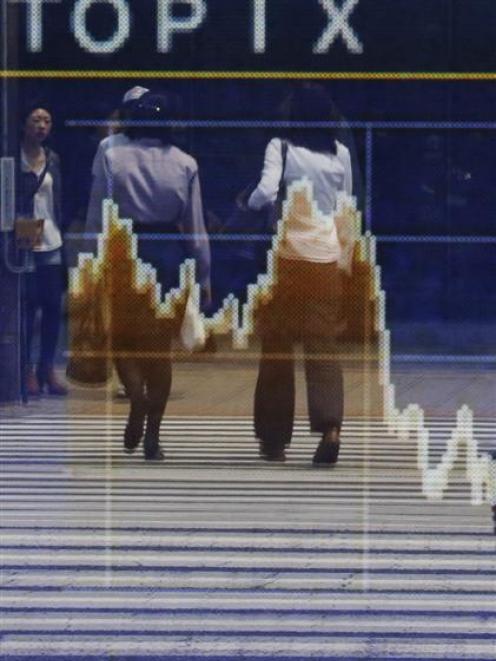 Reflections in a stock quotation board showing the falling Topix index outside a brokerage in Tokyo. Photo by Reuters.
Bear markets are likely to rage this week if United States traders and investors decide today to continue selling off shares and moving into the safer avenue of bonds and some currencies.

Comments out of Europe yesterday pointed to signs of a more urgent push for fiscal unity in the euro zone but that might not be enough for US traders and investors as sentiment remains pessimistic about any sort of recovery after poor US job numbers and slowing China growth.

Asian markets and the Australian major index plunged about 2% in early trading yesterday, following the lead of Europe and the US over the weekend.

The NZX was closed yesterday for the Queen's Birthday holiday trading.

The Tokyo Topix index fell to a 28-year low and Japan's Nikkei average fell 2% after last week marking its ninth straight week of losses, the longest such losing streak run in 20 years.

The Australian sharemarket plunged 1.75% in opening trade to its lowest level since November after Wall Street suffered its worst day of 2012 on Friday and fell into bear market territory.

In a classic "risk-off" day, any growth-related stocks were hit hard in opening trade, with the gold sector the only bright spot, CMC Markets chief market strategist Michael McCarthy said.

"Having had much more nuanced trading for most of this year, today anything growth-related is getting smashed."

Markets dropped around the world after Wall Street's major indices suffered their worst day of the year on the back of disappointing US jobs figures and slow manufacturing growth.

The euro was off its lows reached on Friday and the yen retreated from its highs against the US dollar, while the Australian dollar, which is closely linked to investor risk appetite, crawled back from eight-month lows hit on Friday.

Fears the euro-zone debt crisis was spilling over to the US sparked fresh buying of US, German, Japanese, Swiss and Nordic government debt, which are perceived as safe havens in times of market turbulence.

Analysts are closely watching several central bank policy meetings due this week, including those of the Reserve Bank of Australia, the Bank of England and the European Central Bank for clues on their responses to vulnerable global growth.

US Federal Reserve chairman Ben Bernanke will testify before a congressional committee about the state of the US economy on Capitol Hill on Thursday.

A Reuters poll of 15 dealers gave a 35% chance of the Fed extending its stimulative "Operation Twist" at that meeting. The poll showed that dealers expecting further quantitative easing, or QE3, rose to 50% from 33% in May.

Stock market rallies in each of the past three years have been fuelled by combinations of massive central bank and government stimulus spending.

That is now being seen as the only hope for equities this year.