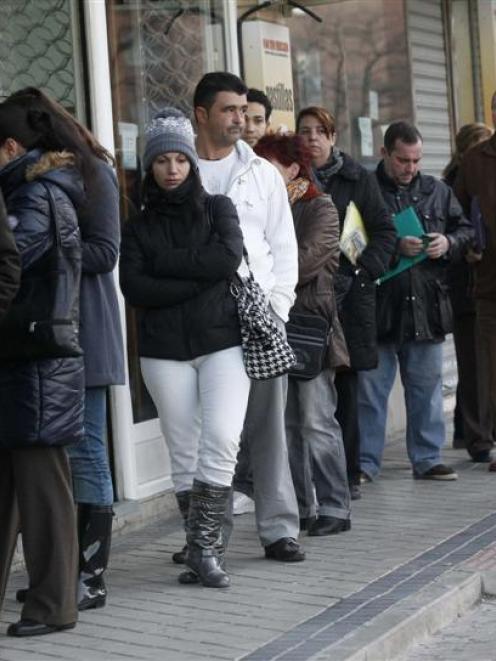 Unemployment queues could stay long this year. Photo by Reuters.
Clouds of gloom are hanging over employment prospects for 2012 with employment confidence levels falling to its lowest level since mid-2009.

The Westpac McDermott Miller employment confidence index fell 99.6 points in December where a reading below 100 means contraction and above 100, expansion.

In September last year, the national index was 104.2 points.

"Employment confidence suggests that households now see the labour market remaining soft for a while yet."

The current employment conditions index, which summarises households' perceptions of current labour market conditions, had not improved since March 2011, he said.

That was more pessimistic than both the Westpac and Reserve Bank forecasts which were for unemployment to drift down gradually, as Christchurch reconstruction-led activity ramped up.

The New Zealand Institute of Economic Research's quarterly survey of business, due out next week, which asked businesses about their hiring decisions and ease of finding staff, would provide additional information on the state of the labour market, Mr Stephens said.

There was a surprising jump in the balance of households reporting an increase in their earnings but that should not alarm the Reserve Bank.

Mr Stephens believed the latest results showed a sense of greater vulnerability was emerging among lower and middle income households.

A net 15% of lower-income respondents now thought their jobs would be less secure in a year, up from 3% in September.

A net 9% expected to earn more this year, down from 31% in September.

Among middle-income New Zealanders, expectations for their job security and earnings were also down appreciably, Mr Stephens said.

New Zealanders were particularly pessimistic about the broader economy.

"On balance, a massive 71% in that group now think jobs are hard to get nationwide, and a net 15% think that things will get even worse."