Designer plans to keep it all right here 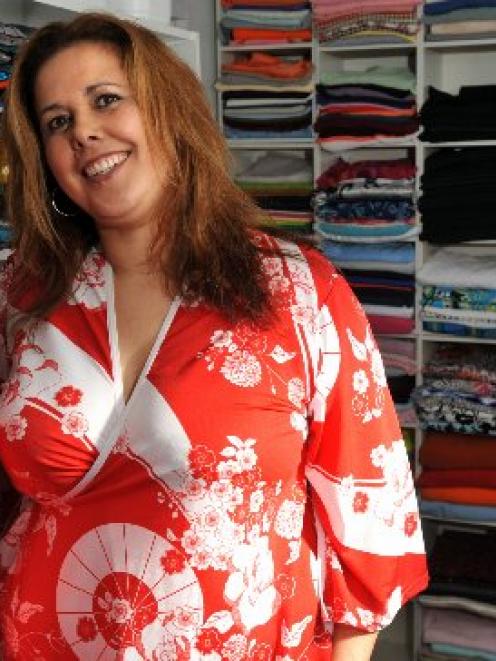 Costume and clothing designer Narelle Stewart in her studio in Waldronville. Photo by Gregor Richardson.
Narelle Stewart has some big plans for her Dunedin-based clothing and costume business.

She hopes to eventually open a factory, employing staff and keeping manufacturing not only in New Zealand, but in the city.

Miss Stewart (41), who moved to Dunedin two and a-half years ago, is about to launch a new yoga and sportswear label, Narelle Maree.

The former dance teacher, who was on the stage herself from the age of 2, used to teach tap, ballet and jazz in Auckland.

She started making costumes, tracksuits and uniforms. One thing led to another, and she agreed to take on outside work.

Eventually ''something had to give'' and she gave up teaching to concentrate on NS Designs, producing costumes, training wear and promotional outfits for dancing, gymnastics, aerobics and other performance sports.

A day trip south to visit some friends who had moved to Fairlie was enough to get her thinking and she moved to the small rural South Canterbury town four months later.

After a year in Fairlie, and then a year in Ashburton, she decided to move to Dunedin. She has no regrets about that decision.

''It's a city that has everything a city has to offer but it doesn't feel like there's that many people here. I like it feels like a smaller town. There's heaps to do.

''I just love it in the South Island. It's so good, it's so much easier to ... have a life and not get kind of sucked into the stress and speed that everything goes unnecessarily up in Auckland,'' she said.

When it came to creating costumes or clothing, comfort was a priority. Having been a dancer herself and worn ''scratchy'' costumes, she was always amused when customers commented on how comfortable her designs were.

''It's like, surely stuff can be comfortable,'' she said.

With her new range, she planned to mostly work with merino and DryLite fabrics. With merino, it was about educating people that it was a fibre for ''four seasons'', she said.

She felt strongly about wellness and the need for people to look after themselves and take time out for themselves.

She would continue to make costumes for which she did all her own patterning - drawing up a design and then turning it into an outfit.

It was a ''crazy'' time during June and July, when she made about 250 costumes, working day and night and grabbing ''a few hours' sleep every now and then''. While it was ''just ridiculous'', she had to keep going because she had committed to orders.

But it was also something she was passionate about and it had been part of her life for a very long time.

She was in the process of finishing renovating a work area at her home. In the ''big picture'', she wanted to set up a factory, which she acknowledged would not happen overnight.

First, the plan was to get some outworkers, and then bring it all together in one place.

While other clothing manufacturers had gone offshore, that was not her ''personality'', Miss Stewart said.

Manufacturing here did not mean she could not build up a business and ''sell to the world'', and she wanted to keep her New Zealand-made philosophy as a point of difference.