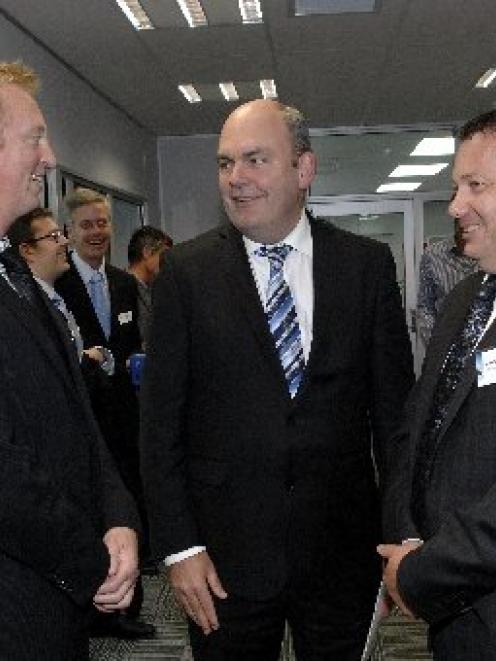 Otago Chamber of Commerce president Peter McIntyre (left) shares a chuckle with Economic Development Minister Steven Joyce and chamber chief John Christie. Photo by Linda Robertson.
Steven Joyce has vowed to do all he can to encourage universities to be more actively involved in their business communities when he becomes the Minister of Business, Innovation and Employment on July 1.

"That's not just about having meetings, it's about inviting industry in," he told the Otago Daily Times in an interview yesterday.

Mr Joyce was in Dunedin to visit successful Dunedin businesses and meet a business focus group selected by the Otago Chamber of Commerce.

During his visit, he met staff from Natural History New Zealand, which ran a successful postgraduate course, that benefited the company and students.

"I am going to do everything I can to encourage more of that. Some of that is being done now but we can always do more.

"Dunedin has a university here it should be leveraging off for all it's worth," the minister said.

He would check to ensure the Government was not getting in the way of more interaction between universities and industry and the review of the Performance-based Research Fund (PBRF) would help remove any obstacles.

One of the difficulties had been that people working in industry could not publish papers or citations and were at risk of losing funding.

Mr Joyce said he was excited about the range of his ministerial portfolios as they covered things critical to growing New Zealand's economy, from skills and innovation through to working with businesses.

"The challenge is huge. Coming from a commercial background, I love the stories and the opportunities. These are my favourite days, seeing what people are doing and hearing the fantastic stories."

That was a "tester" and the meeting with a business focus group was to ensure Government policies were aligned with what the group wanted and expected.

Any roadblocks would be tackled by either Mr Joyce or another minister but Mr Joyce stressed he was there to make things happen.

Asked how he saw his role, Mr Joyce said there were regional and national opportunities.

At a national level, government policies needed to be aligned with what businesses needed to grow faster. That included having more successful businesses in New Zealand paying higher wages to their employees.

They both also chaired informal groups of ministers over wide areas.

The intention was to ensure all ministers, and their portfolios, were working in the same direction.

At a regional level, Mr Joyce continued his theme of wanting more from Otago's tertiary sector, checking whether the city felt it was getting all it could from the substantial amount of money and personnel working in that sector.

That also applied to Crown Research Institutes in the city.

"We can always play the Dunedin-Wellington-Dunedin loop but it is ideal if we have the response to local companies in the way they want.

"I do find the Government's funding ecosystem a bit complex and I don't want to add anything to the pie."

There were immediate international education opportunities and the minister wanted to see the industry sector expanded.

The ongoing cultural linkages would pay dividends for New Zealand in 20 to 30 years as former students moved into areas of importance in their own countries and remembered the bonds they formed earlier, he said.