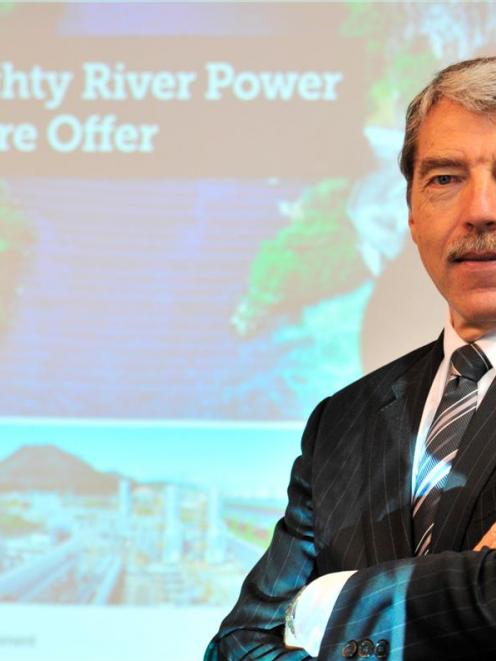 Mighty River Power CEO Doug Heffernan. Photo by Linda Robertson.
On the eve of Mighty River Power's partial float, chief executive Doug Heffernan is unfazed by either the controversy surrounding the future of the Tiwai Point smelter, or the immediate risks the state-owned enterprise faces from North Island drought.

Mr Heffernan said in an interview after the Dunedin brokers' meeting yesterday, which attracted about 20 people, the main topics were the potential for Tiwai's 15% share of power going to the national grid, and questions on the dynamics of geothermal generation.

MRP supplies 17% of the country's power, through nine hydro dams on the Waikato and four geothermal outlets near Taupo. A fifth 82MW geothermal plant, costing less than $475 million, was due to be commissioned shortly.

Tiwai Point's majority owner, Australian mining giant Rio Tinto, has been unable to cut a new deal with power generator and state-owned enterprise Meridian Energy, raising the prospect the smelter could be closed over five years and the subsequent 15% power draw would flood the already oversupplied national grid.

Mr Heffernan conceded most of MRP's assets were newer than those of competitors, who could choose to close down less profitable assets if more power went to the national grid.

''[However] our geothermal and hydro [dams] will continue to generate power, whatever happens at Tiwai,'' Mr Heffernan said.

He highlighted the likelihood of a five-year lead in period to any Tiwai power going to the national grid, saying the market would ''adapt quickly'' and was likely to have ''no price shocks''.

He noted wind-farm generation developments during the past six years generated a similar amount of power as that used by Tiwai, which had been absorbed.

''We will have variability. The quality of our renewables is more resilient,'' Mr Heffernan said.

When asked why investors should consider MRP stock as opposed to that of Contact Energy, Mr Heffernan highlighted geothermal stations were MRP's strength, while the thermal assets of Contact were costlier to run.

Another perceived risk is MRP's geothermal developments in Chile and the United States.

Mr Heffernan said MRP had developed and profitably sold out of one US venture, and was considering a second, in which it would this time take a long-term stake, if it went ahead.

He highlighted that Chile had ''vast'' untapped geothermal potential in the Andean mountain range which offered ''significant rewards'', as Chile, like New Zealand, was moving from hydro and thermal generation to geothermal energy conversion.

He set aside the perception the Chile developments were an unknown risk for potential investors, saying less than $100 million had been spent in the South American country, which was small given MRP's overall $5 billion book value.

Capital allocations had been made for Chile, but not committed, he said.

A final decision on Chilean scoping studies would be made before the end of the year, and if MRP were to go ahead, it would be in a cash-generating, joint-venture arrangement with local companies.

The North Island drought had caused the Waikato River to fall to a ''very low'' flow of 140cumecs, with Lake Taupo continuing to fall. MRP is operating within the last 15cm-20cm of the overall 1.4m lake operating range, which mirrored conditions in 2008, he said.

Mr Heffernan was confident in relying on a century of catchment rain records, that while overall generation for July would be down by a small amount, winter rains would come and capacity would resume.

Having been with MRP as chief executive for 15 years, Mr Heffernan is bowing out in August next year, citing length of service and family reasons.