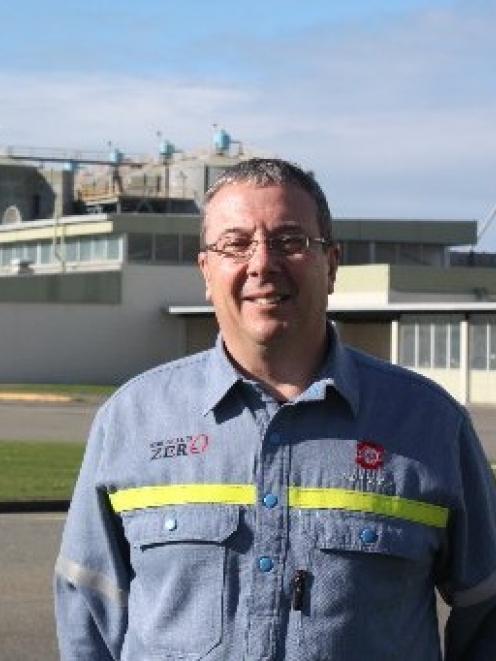 A happy New Zealand Aluminium Smelters chairman Brian Cooper outside the Tiwai Point smelter yesterday. Photo by Allison Rudd.
The signing of an electricity deal with Meridian Energy and a one-off injection of $30 million from the Government guarantee the future of the Tiwai Point aluminum smelter for at least two and a-half years and hopefully beyond, the chairman of the company which operates the plant says.

''This is a fantastic day. The clouds have lifted over Invercargill,'' New Zealand Aluminium Smelters Ltd (NZAS) chairman Brian Cooper said at the smelter yesterday.

The plant near Bluff employs 800 staff and contractors on site and supports an estimated 2400 downstream jobs.

The smelter has been hit hard in recent years by rising costs and falling aluminium prices internationally and NZAS cut 100 Tiwai Point jobs last year and this week announced plans to reduce maintenance staff numbers by 30.

It had been a ''long, hard road'' over the past 12 months negotiating a deal with Meridian, but the new deal was ''far better for the smelter'', he said.

Backdated to July 1, it wound prices back to 2012 levels, he said. He would not say what the dollar value was but said he ''would have liked it to have been more''.

Mr Cooper described the Government subsidy of $30 million announced yesterday to sweeten the deal as a ''catalyst to finalising the negotiations ... made in recognition of the smelter's great contribution to New Zealand industry''.

The money would be paid to NZAS, he said.

Asked how it would be spent, he said ''probably be handed over to the bank manager''.

The Meridian deal tied NZAS into buying all its constant load requirement of 572MW from Meridian until January 2017, he said.

That was enough to run three of the four potlines. The fourth was closed in April last year as a cost-saving measure and will not be restarted unless global product prices increase.

From 2017 to 2030, NZAS would buy 400MW from Meridian, Mr Cooper said. The deal also allowed NZAS to buy power from other providers if it wished.

The smelter is one of several NZAS's parent company, Rio Tinto, has on the market. Mr Cooper said if NZAS retained ownership, its aim was to operate the smelter beyond 2017, but that depended on factors such as reversing operating losses and an improved international market for aluminium.

''The Meridian deal puts us in a far better position to achieve that. It is a platform to get us back to profitability.''

Last year, the smelter slashed $40 million from operating costs and Mr Cooper said the same level of savings was being sought this year. Shedding maintenance jobs was still on the agenda, although he said the smelter had vacancies and some maintenance staff could move into those positions.

There were unlikely to be further job losses, he said. Invercargill Mayor Tim Shadbolt said he was pleased the deal had been signed and was not concerned it only secured the future of the smelter until the start of 2017.

''A lot can happen in three years and it is my feeling that we are coming through the worst of the global financial crisis, which has been the root of the smelter's problems.''