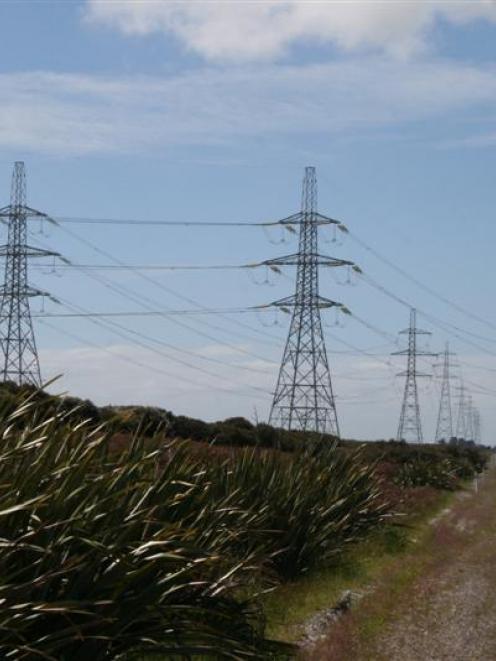 Transmission lines will be needed to divert smelter power into the national grid. Photo by Allison Rudd.
All the cards do not rest with Rio Tinto in the stalled negotiations over electricity contracts with the Tiwai Point aluminium smelter, WHK New Zealand chief executive Phil Mulvey says.

Mr Mulvey, a born and bred Southlander who moved to Auckland about 15 months ago, said it was in the best interests of both Rio Tinto and the Government to reach a deal.

''Rio Tinto has hived off its smelter assets into Pacific Aluminium with the view of selling off those assets. If it shuts the plant, it is not worth anything.''

It was in the interests of the Government to reach a deal because of the output of power coming from Manapouri, he said. With 14% of New Zealand's power being taken by the smelter, it would take 10 years or more of economic growth to soak up that capacity if the smelter closed.

''That will affect the value of all generator companies in New Zealand, a lot of them owned by the Government,'' Mr Mulvey, the deputy chairman of Invercargill-based PowerNet, said.

The smelter probably had 10 years to 15 years of life left in it and it was in the interests of both parties to have a phased-out closure rather than a sudden closure, which would leave Invercargill reeling, he said.

Pacific Aluminium was also a major contributor to the survival of businesses in the region. The major engineering firms provided world-class work for the smelter.

The flow-on effects of a closure could see school closures and a reduction of services in the region.

Rio Tinto had been portrayed as having the strong hand because of its threat to shut the smelter. However, it would weaken its position when selling Pacific Aluminium if the Tiwai Point smelter was closed.

Big corporations did not like losing money but Rio Tinto was faced with falling commodity prices and the strength of the Australian and New Zealand currencies, Mr Mulvey said.

The global financial crisis had then provided the ''perfect storm'' for the smelter, he said.

''The parties must reach an agreement on electricity prices. Anything else will be regarded as a failure.''