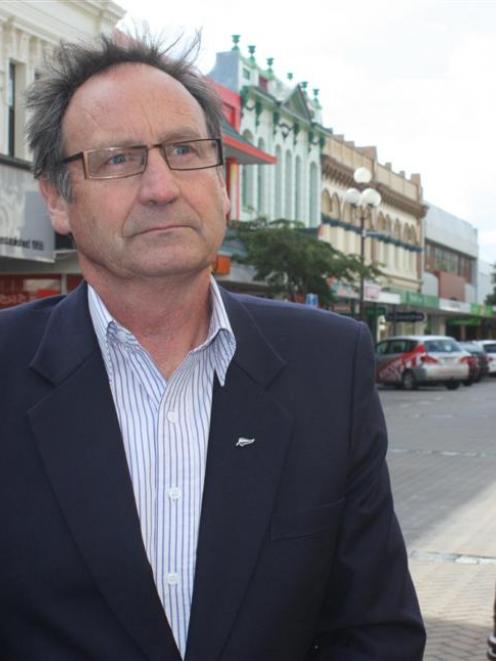 Southland Chamber of Commerce chief executive Richard Hay believes the timing of Meridian's statement it considered it was unlikely an agreement with Pacific Aluminium could be reached and the Government's surprise announcement was not a coincidence. Photo by Petrina Wright.
Meridian Energy is being accused of deliberately withdrawing from talks with Pacific Aluminium on the eve of Easter, leaving the operator of the Tiwai Point aluminium smelter with no room to move.

The Easter long weekend also coincided with Southland anniversary day, which was on Tuesday of this week, the day Prime Minister John Key ruled out any further negotiations with the smelter's ultimate owner, Australian resources giant Rio Tinto. Talks are snagged on power prices and other conditions.

Mr Key indicated on Tuesday the smelter could wind down over five years. Southland Chamber of Commerce chief executive Richard Hay told the Otago Daily Times yesterday that far from Rio Tinto playing ''hard ball'' with Meridian and the Government, it was in fact Meridian which was at fault.

Asked if he trusted those sources, he said ''implicitly''.

Meridian chief executive Mark Binns said in response to questions from the ODT that the company had been open with Pacific Aluminium throughout the process and provided plenty of notice it would be making the disclosure ahead of its release.

''There were no surprises and the information that merely outlined the status of negotiations was released following a decision made by Meridian's board that week.''

The information on the status of the contract was material to Meridian's business given the size and scale of the contract. The fact the parties had reached an impasse was a material issue that required Meridian to disclose to the market that the company considered it was unlikely an agreement with Pacific Aluminium could be reached, he said.

Mr Hay maintained Pacific Aluminium was caught off guard by the Government's announcement, which came ''out of the blue'' and left the company with too little time to make a considered judgement.

Easter was celebrated in Australia, as well as New Zealand, and with the added disadvantage of anniversary day being on Tuesday, Pacific Aluminium did not have enough time.

''The timing of all of this is interesting. The perception is that Rio Tinto created this to be able to leverage off the sale of Mighty River Power. In fact, Rio approached the Government some time ago advising it of the situation in good faith, hoping to reach an understanding well in advance of the Mighty River offer being opened to the public.''

Mr Hay now believed the latest furore had been instigated by Meridian releasing its statement suddenly last Thursday, the day before Good Friday, followed by the Government's surprise announcement.

The smelter contributed not only to the Southland economy but was also the country's largest single exporter, contributing 10% of Southland's gross domestic product (GDP) and providing $1 billion of exports to the country's GDP annually.

While agreeing that companies should stand on their own without subsidies, Mr Hay said the overall worth of the smelter to Southland and wider New Zealand meant a short-term subsidy should be considered.

Meridian had not made public the details of its final offer to Pacific Aluminium, but the amount of profit it was taking from the smelter made transparency a must.

''Meridian has been open to talks and has already offered significant concessions on the agreed contract to Pacific Aluminium.''

Meridian had expressed an openness to continue to hear from Pacific Aluminium about what options it saw were available to bridge the gap between the parties, he said.

New Zealand Aluminium Smelters, the former operator of Tiwai Point, signed a long-term contract with Meridian in 2007. That came into effect in January this year. The contract provided NZAS and Meridian a basis for both parties to continue to operate under unless an agreement to change the contract was reached.

Rio Tinto set up Pacific Aluminium as a business unit to facilitate the sale of its Australasian aluminium assets, including Tiwai Point.

Meridian has been talking with Pacific Aluminium about changes to the existing electricity supply contract since July last year.