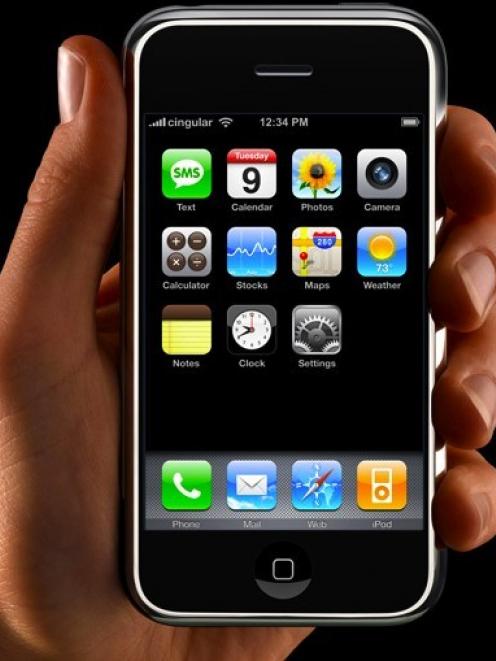 Apple's iPhone.
After a series of leaked prototypes, it's almost a given that Apple will unveil a new version of the iPhone during its annual software developers conference that opens this week in San Francisco.

The revelation of a splashy new iPhone would clear up one of the highest-profile Apple mysteries of the year - second to the existence, confirmed in January, of the iPad.

Yet it would leave another unknown simmering at Apple, one with far-reaching implications for how we listen to music.

Apple won't comment on its plans, but it has used this conference to launch the last two generations of its smart phone. In April, Gizmodo, a tech blog, paid $US5000 to obtain a working iPhone prototype that was lost by an Apple engineer in a Silicon Valley bar.

Apple didn't say the prototype represented the next model of the iPhone, but if the descriptions posted online are accurate, the device will be getting a clearer display, longer battery life and a front-facing camera that could be used for videoconferencing.

It's also likely to have the updated iPhone software Apple previewed in April that makes it easier for users to run more than one program at a time.

In another sign Apple is readying a new model, Wal-Mart Storeshalved the price of one kind of the iPhone 3GS last month - the model that debuted last year - to $US97.

And as of this week AT&T, the sole carrier - at least for now - of the iPhone in the US, will stop letting new customers use an unlimited amount of wireless data for a flat fee.

Instead, in an attempt to reduce iPhone-driven congestion on its network, AT&T will offer plans that will cost the biggest users of data more money.

It may not make an appearance during chief executive Steve Jobs' presentation,  but Apple is also likely to be working on a service that could change the way many of us think about buying and listening to music.

The success of the iPod and the iTunes store has made Apple the world's largest music retailer, but now there's another revolution stirring in the digital song business.

As Apple's iPhone and other smart phones became more popular, several new services started sending music over the Internet straight to the devices, letting users skip the step of plugging in and transferring songs from a computer as iTunes still requires.

Such services, including Rhapsody and Spotify, which operates in Europe, give people access to just about every song imaginable for a monthly fee.

Forrester Research analyst Sonal Gandhi said these streaming services are still too small to lure Apple into directly competing. But Apple does need to keep an eye on Google, which is building music-streaming technology into its increasingly popular Android phones.

Google acquired a company called Simplify Media this year and said in May it plans to build a desktop program that can beam people's iTunes libraries over the Internet to Android phones.

Apple may be cooking up something similar.

In late 2009, Apple bought Lala.com, which gave customers a way to listen to songs online, anywhere, if they had already purchased and stored the tracks on their own computer.

Lala users could add new songs to their mix, paying 10c a song for an unlimited number of plays online or more if they also wanted to download the song to a device. Lala had built an iPhone application, but Apple bought the company before the app was made available to consumers.

Apple shuttered Lala's service in May, and technology analysts believe that was a temporary step before Apple transforms the service into a way for iTunes shoppers to access music from the Web, the iPhone and other Apple devices.

Jobs was asked last week at The Wall Street Journal's "D: All Things Digital" conference about Apple's plans for over-the-Internet access to music and other data, but he didn't show his hand.

"There's a lot of things we're working on," he said.

Even if the technology is ready, letting people stream music online - even music they have already paid for - requires new agreements between Apple and recording companies.

Apple and the recording labels had general talks about possible plans for Lala several months ago, but there haven't been substantive talks since then, according to executives in the music industry.