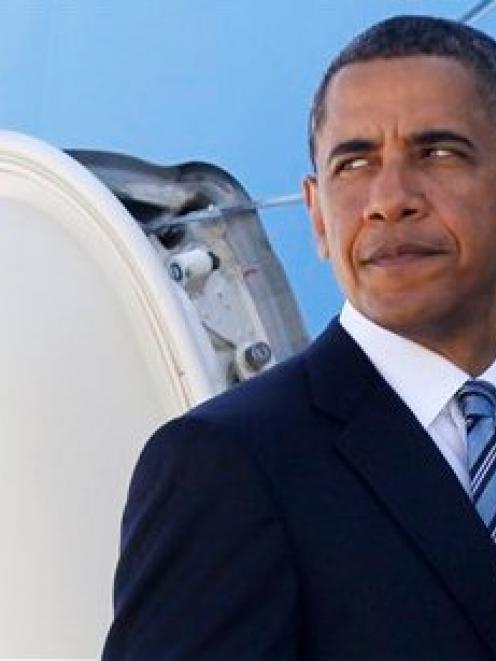 US president Barack Obama's Twitter account was one of several hacked by a French man convicted for the crime late last week. Photo by AP.
A court in central France has convicted a young Frenchman accused of infiltrating Twitter and peeping at the account of President Barack Obama, and given him a five-month suspended prison sentence.

The lawyer for Francois Cousteix, whose online name was Hacker Croll, said his client was happy with the decision by the Clermont-Ferrand court.

He risked up to two years in prison and a €30,000 fine for breaking into a data system.

"The verdict is satisfying, given all the media pressure that built up," attorney Jean-Francois Canis said by telephone.

Cousteix, 24, infiltrated Twitter, and the accounts of Obama and singers Britney Spears and Lilly Allen, among other celebrities, but maintained that his motives were good - to warn internet users about data security.

Prosecutors said Cousteix did not have access to sensitive information about the American president.

Cousteix managed to break into the accounts by searching information that is most commonly used for passwords, such as birth dates or pet names, on social networking sites.

He lives with his parents and has no college degree, and has not had any special computer training.

After his arrest, Cousteix told France-3 television: "It's a message I wanted to get out to internet users, to show them that no system is invulnerable."

Twitter said last July that it was the victim of a security breach.

The French prosecutor said Cousteix infiltrated the accounts of several Twitter administrative employees. He was able to access information such as contracts with partners and resumes from job applicants.

Hacker Croll emailed some of the documents to TechCrunch, a widely read technology blog, and it subsequently published some of them, including financial projections.

Some of the material was more embarrassing than damaging, like floor plans for new office space and a pitch for a Twitter TV show.

It is not the first time this self-described well-intended hacker has had issues with the law.

He was convicted last January and given an eight-month suspended prison sentence for diverting money from a gambling web site in 2007, his lawyer said.

Following his conviction, Cousteix planned to return to his job at Rentabiliweb, a we bmarketing and micropayment web site, his lawyer said.

Cousteix got the job two months ago, partly due to the fame of his online deeds.