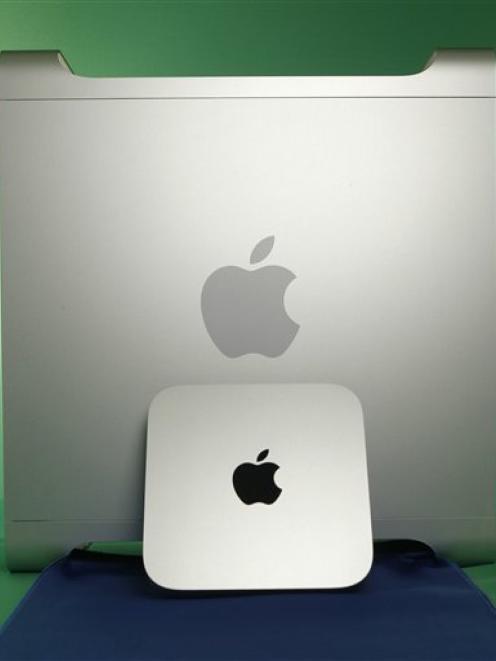 I'm talking about the Mac mini, and the "sharp" part is literal: this tiny desktop computer now has an elegant aluminum case with edges so defined they can scrape your skin off.

Apple released a new mini this week, and it's the biggest redesign of the product since it was launched in 2005.

It adds some much-needed features and a less-than-necessary, but very appealing, design flourish.

So why would you get a Mac mini? It doesn't have the horsepower of the full-sized Mac Pro desktop, or the portability of the MacBook.

Well, for one thing, it's still the cheapest way to get access to Mac software. If you want to do video editing or graphic design, the Mac rules. The new mini starts at $US699, up from $US599 for the previous model. That's without a keyboard, mouse or monitor.

It could also be a "home base" computer, acting as a backup and file server for the household's laptops. The basic model now comes with a 320 gigabyte hard drive, enough for most purposes and twice the size of the old basic model.

Third, the mini is a great option if you want to connect your living-room TV to the internet and your collection of movies, music and photos.

A few months ago, I looked at several PCs for this role, and concluded that the Mac mini of the time was great, except that it lacked an SD card slot and an HDMI jack for easy connection to the TV and/or receiver, and that the power button was in the wrong place.

The new model addresses two of those three concerns. It has an SD slot, which makes it much easier to transfer photos and camcorder footage to the hard drive, and it has an HDMI jack.

That means one cable can carry high-quality audio and video from the mini at the same time. It's the first Mac with a built-in HDMI port.

Unfortunately, the power button is still at the back of the device, and that's where they've placed the SD slot too. That's not convenient, especially if you're sliding the mini into the entertainment centre.

Apple obviously wants to keep the front of the device as clean as possible, shoving all the messy details to the rear. As it often does, it's favoring form over function.

The case is another example of Apple obsessing over details that other manufacturers don't sweat. Lately, Apple has been making the chassis for its laptops by hollowing out blocks of aluminum, then stuffing the components inside. It's an expensive process, but it adds rigidity to the frame and looks sleek.

The case of the new mini is made the same way. It's not really necessary - desktops are sturdy by default - but it's how you get those natty knife-edge corners. The mini won't look out of place in the most elegant living room.

It helps that the mini is so small: just 3.5cm thick and 19.5cm square. The fan and hard drive are practically inaudible. It can connect to the internet via Wi-Fi, making a cable unnecessary.

In another aesthetically pleasing feat of engineering, Apple has done away with the power brick, which truly was brick-sized on the previous model. The power adapter is now built into the case. That's minimalism we can believe in.

We connected the mini to a 50-inch LCD TV, and enjoyed a high-definition home movie, TV shows from Hulu.com and a game on the big screen. The mini has a built-in DVD drive, but Apple does not yet support Blu-ray drives.

The redesign of the case brings one functional benefit: It's now possible to open a hatch at the bottom to upgrade the memory. It comes with 2 gigabytes, which is fine for casual use, but if you're editing video, you'll want more.

The mini has roughly the same computing horsepower as a MacBook, and less than an iMac, which starts at $US1200. It's adequate for editing even high-definition video, but not ideal.

It's also not a gaming powerhouse, but the Mac isn't a big platform for games anyway. We installed Dragon Age: Origins, probably the Mac game with the highest computing demands right now.

Our elven rogue character scuttled around snappily at high resolution with the game set to the lowest level of graphical detail. Adding detail slowed him down too much.

The mini is a cool PC, with many qualities. It may be a bit difficult to figure out where it fits into your life, but keep it in mind: It will fit anywhere in your home.