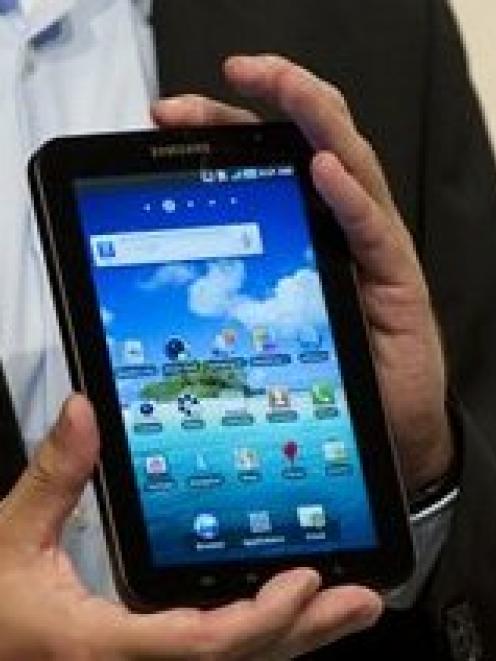 The thin tablet device weighs 380g and has a 7-inch (18-centimeter) touch screen, making it about three times that of an Apple iPhone, but roughly a third smaller than an iPad.

Richter says it comes with Google Inc.'s Android 2.2 operating system, which can run HTML5 and Adobe's Flash Player - unlike the iPad.

The Galaxy will allow users to browse the web and check email just as on a regular PC, Richter said.

"The Samsung Galaxy Tab has been designed to enable consumers to maximise their online experience wherever that may be," the head of Samsung's mobile communications business, J.K. Shin, said.

The price of the device will depend on telecommunications operators, who will sell the device from next month in Europe and in a few months in the US and Asia, Samsung said.

The device supports Bluetooth, Wi-Fi and 3G cell phone networks, making it a combination of smart phone and laptop. It "turns out to be a perfect speakerphone on the desk, or a mobile phone on the move via Bluetooth headset," Samsung said.

The tablet PC also comes with two cameras, one 3-megabyte digital camera with a flash on the back of the device, and a second camera on the front for video conferences - a feature the iPad lacks, but other competitors such as Dell's Streak tablet PC also offers.

The company said that the device's battery would support more than eight hours of continuous multimedia usage, or seven hours of video play.

The tablet also comes with Swype, a third-party application already found on Samsung's Galaxy 5 series phone and available for some other Android-based handsets, which allows users to type on virtual keyboards by simply swiping fingers around from one letter to the next, lifting only between words.

The application then uses an algorithm to determine the word that is intended, which the company says allows for typing speeds of more than 40 words per minute.

Commercial success of the device will be crucial for the world's largest maker of computer memory chips, flat screen TVs and liquid crystal displays.

Samsung's quarterly profit surged by 83 percent to a record high of 4.28 trillion South Korean won ($US3.6 billion) in the second quarter ended June 30, but the company warned that intensifying competition in areas like mobile phones could dent earnings in coming quarters.