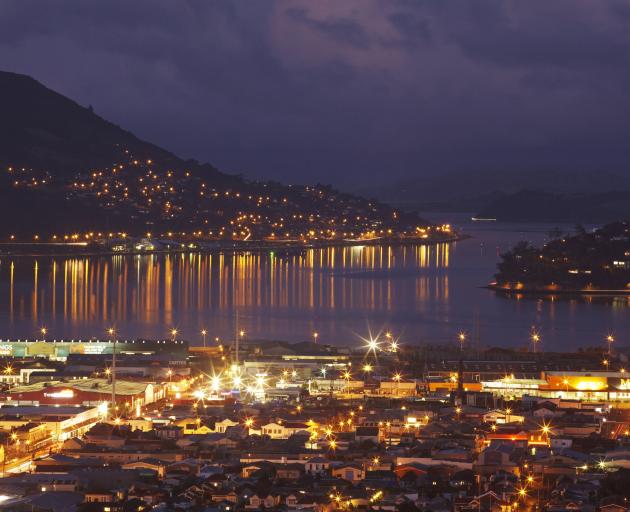 Dunedin residents are attempting to figure out the origin of a 'loud rumble' heard throughout the city this evening. Photo: davidwallphoto.com
MetService has confirmed there was a lightning strike off the coast of Otago last night, which is the likely cause of the loud rumbling noise heard by many.

MetService communications meteorologist Lisa Murray said there was a single lightning strike about 50km out to sea, southeast of the Otago Peninsula, at 8.27pm.

"There wasn't a whole lot around there. It was probably just what's called a squat thunder storm, where the cold air from the land was warmed quite a lot by the sea air.

"Sometimes squat thunderstorms can be quite a lot louder than your typical thunderstorm.''

The noise was reportedly heard along much of the Otago coastline and inland as far as Outram, Middlemarch, Palmerston and even Queenstown.

Ms Murray said sound could travel further, depending on the weather activity, but she doubted last night's lightning strike could be heard as far away as Queenstown.

Hundreds of Facebook users have taken to the Dunedin News Facebook page in an effort to figure out the source of the mysterious sound.

The original post has been edited three times, with suggestions it could have been thunder or even a meteorite.

A Dunedin resident told the Herald it sounded like a cannon firing on Anzac Day and also thought it was an earthquake but there was no shake.

"Was up the main street of Mosgiel when I heard it," one woman wrote.

"Thought it was just a plane taking off and with the direction of the wind sounded louder than normal!"

"I thought that noise was the drunk guy upstairs falling over again," another said.

"Yeah we get it everyone heard it, nobody has any idea what it was tho by the looks," one added.

"I must be the only one who didn't hear it. I've not even got anything loud going on. Weird," another said.

The noise was reportedly heard near the Dunedin Airport in Outram, towards Middlemarch and as far away as Queenstown and Palmerston too.

Meanwhile, no earthquakes have been registered on Geonet for the Dunedin region.

"Ms Murray said sound could travel further, depending on the weather activity, but she doubted last night's lightning strike could be heard as far away as Queenstown".
So what you are doing is calling the people in Queenston who heard it ... liars.

Its climate change / we cant forget planet earth has only 12 years life ...... remember /