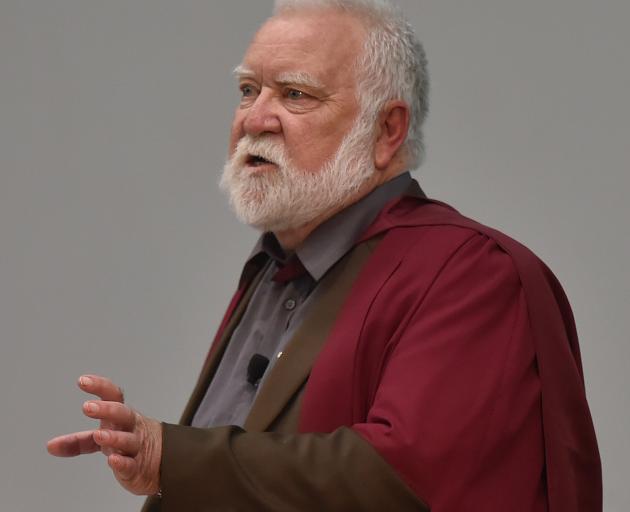 Art education is more important than ever in the visual world people live in today, Prof David Bell says.

The professor of education at Otago University College of Education believes life is centred around the visual and students need to be more critical in the way they engage with and evaluate the visual than ever before.

''The problem is they do not know where the information has come from or the agenda behind what they are confronted by.''

That is where art education steps in, although it has had a rocky road in the 30 or so years Bell has been in the sector.

He credits his interest in arts to growing up and being schooled in the time of great Dunedin art educator Gordon Tovey, who has been credited as revolutionising art teaching in New Zealand and formulating innovative programmes integrating art, drama, music and movement.

It was during this time teachers in training received a high level of art education.

Although in those days, art did not exist in boys' secondary schools. It was taught only in girls' schools and the co-ed King Edward Tech.

So instead, Bell studied history and geography. But when he moved to Christchurch to do specialist secondary teacher training, he did it in art and social sciences.

However, the enthusiasm for arts did not last. In the 1960s, the then Department for Education began what became a gradual process of reducing and changing its art education for emerging teachers, alongside reducing its course length from four to three years.

''All of the arts were sacrificed because of this. Teachers got less training in art education than they got in 1876.''

While there was opposition to the changing curriculum, it morphed into an attitude of ''let's do the best we can'', he said.

There were more changes to come in the 1980s as art education changed from its emphasis on hands-on painting, craft, sculpture, printmaking and drawing.

''In the '50s they worked on the basis of young people having an imagination and being creative.''

The focus was instead on learning about art, its history and context and understanding the processes.

''This change impacted on me significantly. It was brilliant. Art and art history inform one another - they are much stronger for that.''

It enabled Bell to mix his interest in social sciences with the arts.

''It allowed me to teach and prepare young people.''

By the late 1990s, more secondary school pupils were taking art in year 13 than in any other country in the world.

''There was a huge art participation and it's still very strong in secondary schools - they've been immune from the wider changes that have hit primary hard.''

It was important it remained so, as pupils needed to learn more about the visual and how to engage with it as part of everyday life.

''More than ever before, it is important, as they are living in a visual world.''

Bell, who teaches and takes an active role in secondary art education curriculum review and in the development of assessment for art history with the Ministry of Education and the New Zealand Qualifications Authority, is also interested in the new role institutions such as museums are taking in art and cultural education.

This research interest had come about because of the reduction in preparing primary school teachers in art education and teachers often not being able to rely on older teachers' wisdom.

''They've had to turn to other directions to support learning.''

In many cases, that had been through visits to museums and galleries, where government has allocated funding for educators.

In these programmes, children are able to touch and see things they cannot on screens or in books.

On a research trip to Durham University, in England, he visited a museum where they had deaccessioned Egyptian artefacts, allowing children to become forensic archaeologists - weighing, smelling, feeling pottery containers that were 3500 years old and trying to identify what was held in them.

''It's a different way of learning. It's a great advantage for kids to see things in the flesh that they have not before. It allows them to understand size, texture.''

His research had shown these situations were not just about learning about art but also encouraging children to learn how to engage with art in a meaningful way and learn about cultures.

''It has the potential for us to understand other worlds through art; it can shape their understanding of entirely different cultures.''

It is a pity art is often pigeon-holed as a subject category when it embraces so many different aspects of life, he says.

''It's the beauty of arts in general, especially the visual arts; you experience and embrace a whole gamut of learning experiences.''

For a recent academic paper, he was part of a group studying the impact of preschool children's study of Yayoi Kusama's dot room at Dunedin Public Art Gallery last year.

''It sustained their interest for seven months.''

They found impacts on the children's learning about connectivity in maths and literacy as well as on art.

''A year on and they're still talking about it. They've hauled their families along. It's had a profound effect on their awareness.''

Another interest Bell has is in Japanese art and he based his recent inaugural professorial lecture on ''Why Hokusai's Great Wave Matters''.

He finds Japan endlessly fascinating and Hokusai's Great Wave is known around the world.