Lisa Reihana's art consistently questions and explores the one-sided nature of colonial history. In her latest exhibition, she expertly blends photographic re-enactment with stylised idyllic backgrounds to create an illusory allegorical history which is as believable and vital as the official past learnt from textbooks.

Reihana has taken the work of 19th-century illustrator Jean-Gabriel Charvet as a starting point. Charvet's designs imagined the Pacific as a passive pastel utopia, with tamed countryside lapped by gentle waters and dotted with perfect trees.

Over this backdrop, photographic scenes of first contact between Cook's crew and Pacific Islanders are presented as images from a ship's journal. They present a plausible alternative to the often fanciful descriptions in early explorers' records, but are themselves heavily loaded with dreamlike unreality.

The term ''backdrop'' is apt for the strange surreality of the scenes. The idealised Pacific becomes a stage set, making the action seem like scenes from a play. We are constantly reminded that ''truth'' is never absolute, and that any historical account is simply one person's interpretation - especially when, as here, we are presented with a series of glimpses which together could be ordered to create a multitude of stories.

It is poignant in these days of ''post-truth'' news to be reminded that our ''fixed'' history may be no more accurate than the latest internet rumour.

In his mixed media presentation at the Blue Oyster Gallery, Jackson considers the rituals and practices of divination. These are examined in conjunction with the use of technology to gather data, and the possibility that some scientific approach to prediction is possible.

Jackson uses the icon of ''the Oracle'', a triangular prismatic form which, like the predictions of Nostradamus, offers apparent fatalistic certainty of future events, as long as the correct interpretation can be found.

Divination, though is as much an art as a science, and while rigorous science might demand replicability and reliability, art is - from this viewpoint - a fickle practice which offers no such certainties.

The art of interpretation confounds any ability to judge the validity (or otherwise) of the process. This paradox lies at the heart of the mysteries of foretelling the future.

In a society where cyber-surveillance and data gathering are big business, is the mass of available data enough to predict future events? Or would we fail to recognise the patterns in the data even if some ''oracle'' could show them to us? As Jackson shows, information may be power, but whether information is also knowledge and wisdom is still open to debate. 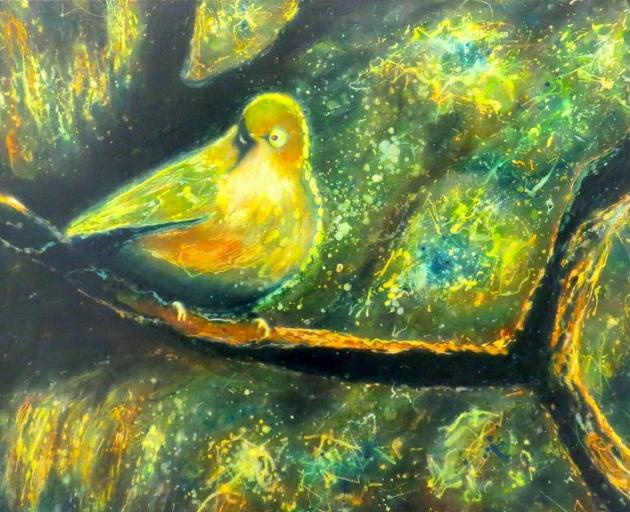 Kate Williamson's art forms an antithesis to the technocracy of Jackson's oracle. Her acrylic images revel in the natural world, specifically the island of wilderness, which is the bush around Waipori Falls.

Williamson claims that her aim is to paint the ''real'' life endangered and dwindled by the encroachment of the ''make believe'' world of human industrialisation. Ironically, her charming pictures present a world that glows in an almost magical light, seemingly hyperreal in its honeyed tones and sparkling dapples.

In pieces such as The Watcher, the light seems to vibrate. The paint, boldly applied in gestural splashes, brings the forest to vivid life.

Works such as Dawn Chorus, Swallows in the Mist and Native Visitors go further still; here, the landscape becomes a breathing backdrop, detail dissolving into an impressionistic sensual realm that is no longer just forest but also impenetrable curtain, shutting out the troubles of the human world.

The bush becomes a place of flowing, shifting colour and light. The fantails of Native Visitors stand out as the only solid items on display, signifiers in a world of molten green.

As with the humans in Lisa Reihana's images, they become the actors in a play, the sole focus of our attention in their vivacity and dynamism.