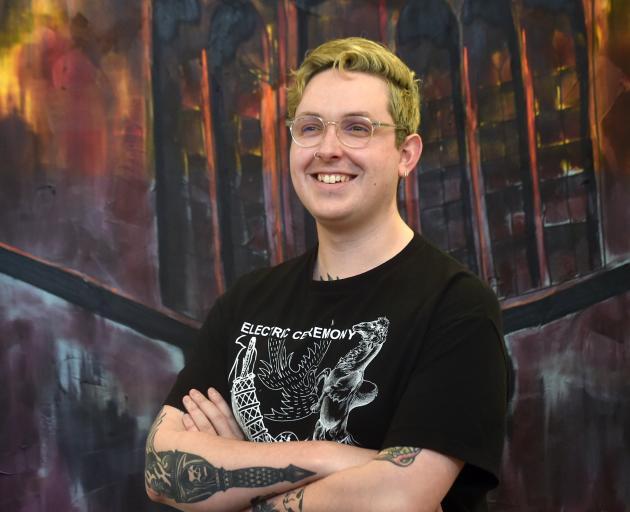 Ben Fitzgerald is working towards his final-year project at Dunedin School of Art. PHOTO: PETER MCINTOSH
The Dunedin Arts Society is keen to encourage young artists to exhibit, so this year introduced the Elizabeth Howie Young Artist Award for emerging artists under 30 at its annual exhibition. Rebecca Fox talks to the winner, Ben Fitzgerald, and another young artist, Danielle Munro, who won the open section award.

Stress on the subtly ‘satirical’

With a wool overcoat hanging off his shoulders, chunky silver rings on his fingers and tattoos crawling up his forearms, Ben Fitzgerald’s appearance reflects his search for a creative outlet.

It has taken many years, a false start at art school, and trying out various creative forms - fashion, jewellery, sculpture - for him to find his "place".

"I’m a compulsive maker. It’s just ideal that people seem to like it at the moment."

Fitzgerald has always been interested in painting and drawing - any kind of creative medium.

"I’ve tried everyone I’ve had access to but I keep returning to drawing."

After high school he tried out a few different outlets such as fashion and even IT. In his first attempt at art school five years ago he spent time in the sculpture department and also dabbled in making jewellery and ceramics.

"It didn’t fit well for me. I was trying to find something that worked really well for me."

So he spent a few years working before he got to the point where he realised he would be pretty miserable doing anything but making art so he decided to return to art school this time settling in the painting department.

While he had painted in the past it was with ink, water colours and acrylic, none of which really worked for him. Then he discovered oil painting and found his niche.

"Oil painting seems to resonate most of all. Painting always felt like, in terms of my practice, where my drawing should go. I don’t generally draw for my paintings, my paintings will be drawings as well."

He describes most of his work as "satirical" but not obviously so. "I like having the opportunity for extended engagement so it doesn’t give it away initially and you can keep finding other things in it to enjoy." 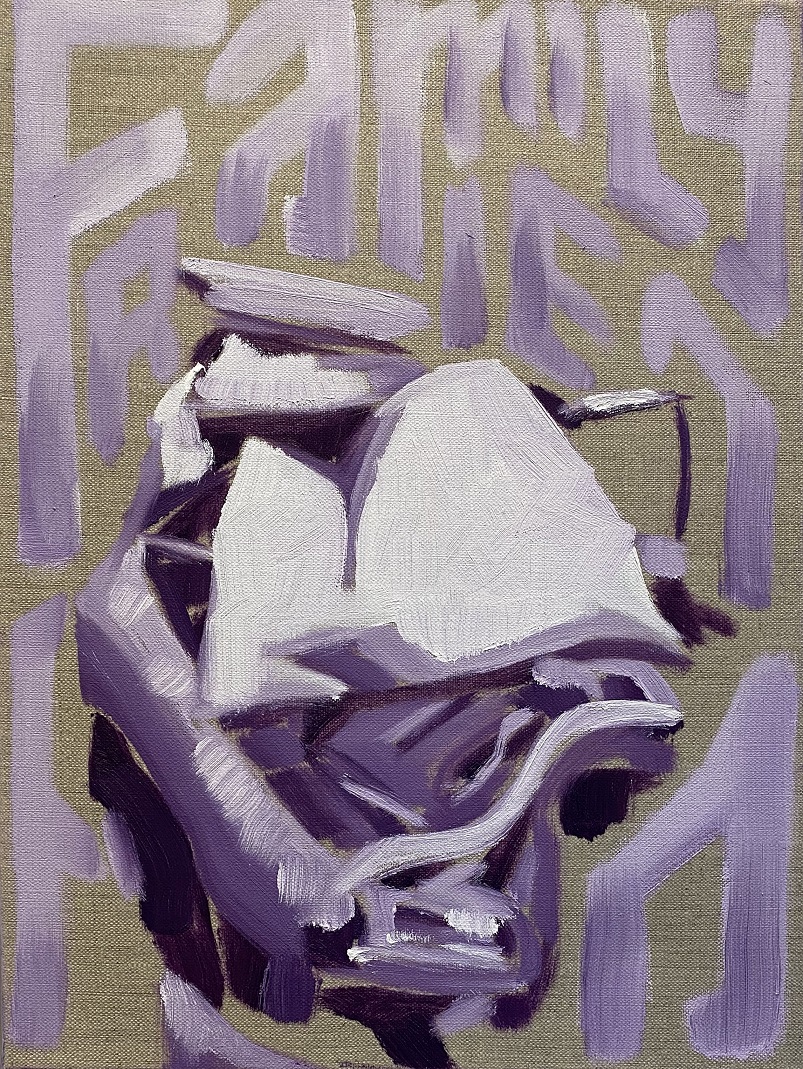 Ben Fitzgerald’s winning Family Friend.
Fitzgerald also found the connection to his work as a tattoo artist. For that his drawing has to be more reserved and tighter but when he is painting he can be "more free and loose".

"I’ve always been interested in tattooing. I thought it was the coolest job one could do. It’s an interesting medium to work in but is not the best venue for artistic expression as it’s like working on commissions consistently.

"Ideally, painting and tattooing together but not overlapping. I go through phases of engaging in one more than the other."

Fitzgerald’s work Family Friend, which won the Otago Art Society Elizabeth Howie Young Artist Award, was inspired by a friend’s tale of the family car. It was passed on to the friend who later sold it before being written off by its next owner.

"He was showing me the images of the crashed car and the way he talked about it was as if it was a family friend, like they’d adopted this object and the whole family invested a lot into it."

Having always been interested in cars as a generic symbol of masculinity and as a strange mobile house, it seemed an interesting subject to paint, using his friend’s photos as a reference, he says.

"I don’t think too much about the subject matter generally before work as I like to leave it as open as possible, to let the painting inform how it develops. Rather than pigeon-holing it into something it does not need to be."

The work also features Fitzgerald’s favourite colourway to paint in, purples, as well as his method of leaving some of the surface he paints on visible. In this case it is the browny-green of the linen cotton he used as a surface. It was coated with transparent primer before he began painting.

"With the linen I really enjoy the colour of it and generally prefer to work in a monochrome and felt like that one went particularly well in it, especially the mid-tones are very complementary to the slightly browny- green of the linen."

When he paints on aluminium he likes to let the metallic surface show through.

Fitzgerald prefers to paint wet on wet as he likes the immediacy.

"I might do multiple layers for the support and let them dry between that but when I’m painting the subject I’ll do it wet on wet. It just works.

"It’s almost like a mindfulness practice as well as an art practice."

In his third year at art school, he is working towards his contribution to the SITE exhibition later this year, which has been made much easier by the $1500 prize money for the award. 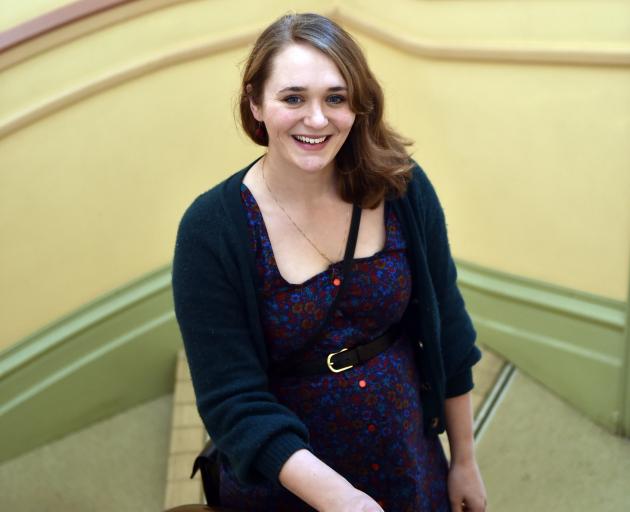 Unlike Fitzgerald’s works which are large and abstract, Danielle Munro’s are often small and detailed.

A mother of two - her youngest is just 7 weeks old - Munro has been making art since she was small, winning a prize at just 5 years old for an artwork.

"I haven’t stopped since. I was the one doodling at the back of the class."

It was a constant for her growing up in Alaska, where she first tried to do "more reasonable" studies at university but art won out.

"It was what I enjoyed so that is what I got my degree in."

Art has been a constant in her life although she struggled to find a direction after leaving art school.

"I didn’t know where I was going with my art or what to do with it. But I was always sketching at least."

She met her New Zealand partner in Spain 10 years ago last month and the pair came back to his home town of Dunedin to settle down when they got married.

"We hosted an American Thanksgiving dinner [to celebrate]."

When she first came to New Zealand her art practice was more naturalistic but she was not happy with her work.

"I was just painting pictures. I’d paint a bird and it would just be a representation of a bird. I broke out of that. In a moment of inspiration, I was doing palette knife paintings, mostly landscape, and found that really freeing. It was quick and the paint did so much of the work and the colours - blending was just magical."

Munro, who was a teacher aide before she had children, found after Walter was born the need to make art that was more than just a creative release.

"Seeing other artists’ work that portrayed meaning, I just feel like we don’t have enough time. Time became so much more precious to just make art for the sake of making art. I want it to be a comment on the time, I guess.

"Even if that was a toddler exploring the world around him."

The choice of the stinkhorn in Little World came from seeing it at Orokonui Ecosanctuary.

"I don’t know. It’s such a unique specimen, eye-catching, vibrant, really unusual. Like the judges’ comment, it looks almost sinister ... It’s such a curious thing.

"I’ve also loved the micro-world, the moss, the undergrowth."

The natural world is dominant in all her works. One of the paintings she is working on now is of her son riding on a South Island robin and she has an idea of doing a painting of her daughter’s face protected by a bird’s wing. 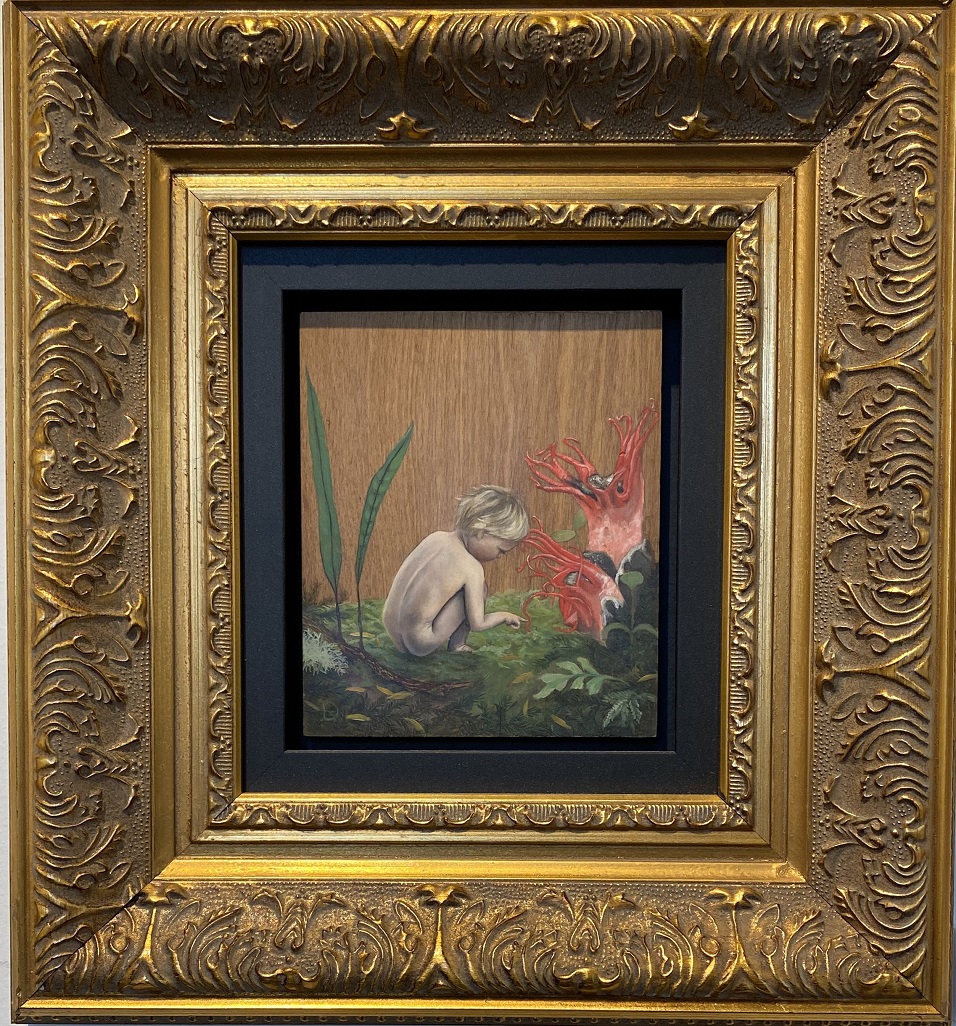 Danielle Munro’s winning Little World
"I don’t think I’ve ever painted a city scene. Our relationship with nature is what my work investigates."

Part of that is her choice to paint on reclaimed wood. Her winning work is painted on an old piece of a rimu dresser she found under her house and cut to size.

"I thought this would be a lovely painting surface. I loved the background - how it shimmers behind the piece. It’s almost like painting on gold leaf but it’s natural and much softer than that. I think that is what drew me to it - it was a living thing."

Being part of the Otago Art Society has been really inspiring for her, so much so she has joined the society’s council.

"Even if it is just encouragement or more directly based on their art."

As well as her own paintings, including water colours, she paints birds for a stained glass artist as well as working in ceramics. She also entered in the competition a ceramic nose and moustache face.

"My work lies in peace in serenity. The first one came from lying in the bath and you can feel the line of water around your face. But then they just became really fun. They started off in that serene place but everyone should make a giant ceramic nose with moustache."

Munro also likes to sew but says whatever she can get her hands on she will give it a go.

"I’m taking a jewellery class next month at the polytech. Just cause - why not?"

However, she says her future paintings will continue to be painted on rimu or other timbers - "what I can find".

"I like the timber itself and it’s nice that it is being reused."

Like Fitzgerald, Munro has discovered making is necessary to her wellbeing and mental health so it is important to find time for it even when juggling it with motherhood.

"I get cranky if I haven’t been painting or sewing or something. I have a very supportive husband, who is more than happy to look after the kids."

"Next year I’d like to have an art show of these works on rimu. It helps keep me in perspective. You need to keep showing up to the practice."