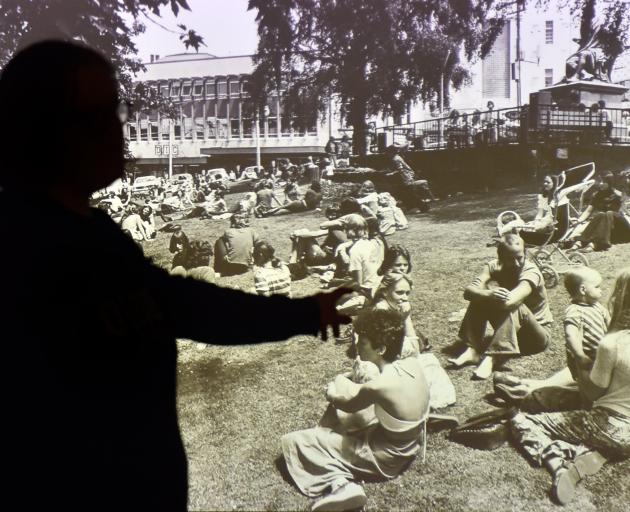 Milly Mitchell-Anyon has projected this old Otago Daily Times image of people enjoying the Octagon on to a wall in the gallery. Photos: Peter McIntosh
As the debate about future uses of the Octagon heats up, Dunedin Public Art Gallery curatorial intern Milly Mitchell-Anyon’s look at how the Octagon became the heart of Dunedin is a timely reminder of the changing nature and function of the site,  Rebecca Fox discovers. 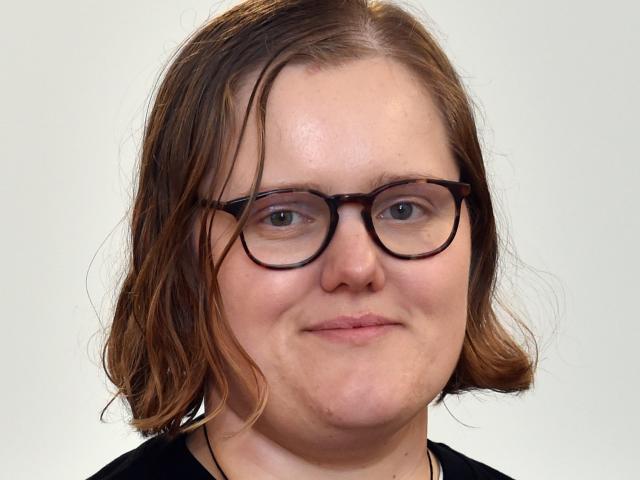 Milly Mitchell-Anyon
Whether it is relaxing in the sun in flared pants and halter tops or catching a tram in long skirts, gloves and hats — the Octagon can tell the story of Dunedin.

For young curator Milly Mitchell-Anyon, new to Dunedin, and working directly on its edge at the Dunedin Public Art Gallery, its place in the city’s history fascinated her and has become the focus of her internship exhibition.

‘‘When I came to Dunedin the Octagon was the heart, the middle. I like to look at what these areas mean now.’’

As she looked into the city’s history, the South Seas Exhibition of 1889 kept coming up.

‘‘I’m really fascinated by that whole process, it’s quite political and it’s kind of propaganda in what it’s meant to be doing and what it creates. There are also other spinoffs from the process like the South Seas exhibitions - it’s a profit-making exercise.

‘‘One of the things that came out of it, the trickle-down of profits going into the Dunedin Amenities Society. The plane trees are this souvenir of this time of 1889, still around today.’’

As part of the beautification of the city for the exhibition, the London Metropolitan Public Garden Association in conjunction with the Dunedin Amenities Society offered funds to plant plane trees in a ‘‘suitable public thoroughfare’’.

Sixteen hybrid London plane trees from a single tree - the parent of London’s plane trees - in Kew Gardens were planted along the central thoroughfare of the Octagon.

So by 1892, reserves considered ‘‘eyesores’’ by citizens and visitors with ‘‘stunted trees and mangy grass’’ had been replaced by ornamental gardens.

Milly Mitchell-Anyon has collated images of the Octagon over the years for her exhibition ‘‘Civic Pride’’.
Fourteen of these trees still stand in the Octagon today having watched over many changes, the one constant in all those years, Ms Mitchell-Anyon says.

‘‘Hundreds of thousands of people have walked through the space, it’s developed over the years — it’s seen a lot of history.’’

Those changes continue today as the Dunedin City Council looks at trialling different pedestrianisation options during the summer to increase the vibrancy of the area, although Octagon businesses are concerned about the impact the closures will have on their businesses.

Mitchell-Anyon has searched the archives of the Hocken where she found two envelopes ‘‘titled Octagon 1 and Octagon 2’’ and the Dunedin Public Art Gallery’s collections for historical references to the exhibition, the Octagon and its trees.

On show is a work by John Gully shown in the 1889 exhibition that is now in the gallery’s collection.

‘‘It zones in on this time of typographical drawings and watercolours. Artists like John Gully were really prolific. They had a purpose — a similar purpose to the exhibition in a way.’’

She has lined up a series of photographs showing the Octagon over time from colonial times during fires, when the trees were just saplings, during public celebrations, the gardens and trees growing, monuments being erected and removed and as a site for activism and protest.

The early photographs show few people, yet as time moves on they show people using the space a lot more.

In more recent times the future of the trees has become increasingly precarious. Eight years ago some of the trees suffered from an unknown disease and despite the city council’s efforts to save them two had to be felled after they died in 2015.

When they were felled the wood was offered to the community and the Otago Woodturners Association took up the offer. Member Croydon Paton turned the wood into bowls.

Six of the bowls are on display as part of the exhibition alongside ceramics by Rebecca Stedman who glazed her jugs with the ash from the trees.

She also commissioned artist group Wilde Projects, headed by Auckland-based artist Richard Orjis, to respond to the trees in the Octagon.

It created installation bttm methodology for the hybrid plane exploring the history of the Octagon and facilitates a meditative exchange with the trees. There is a set of instructions on a billboard telling people how to ‘‘hook up’’ with strangers outside the gallery and to get close to the trees, to show them love to make them grow again.

‘‘You can listen to the meditation track on sound cloud and go out to the trees and tree-hug.’’

In the next room the meditation track plays in front of a large projection of an Otago Daily Times photograph showing people relaxing in the Octagon in the 1970s.

‘‘Public spaces like the Octagon carry with them a sense of civic pride creating a place that represents the social fabric of the community; carrying memories of the past, operating as a place to experience the present and to continue nourishing the community well into the future.’’

It has been an interesting project for the intern who drove down from Whanganui to take up the six-month opportunity.

The internship funded by the Dunedin City Council and Creative New Zealand has always been on her radar to do.

‘‘Dunedin has an excellent reputation for contemporary art so it’s always been a place I’ve wanted to come to.’’

Ms Mitchell-Anyon, who has a master’s degree in art history and has undertaken museum studies, has learnt much about writing, and planning exhibitions.

‘‘You get straight on to everything here.’’

It has enabled her to continue to build her experience base while looking for a full-time job.

She has always wanted to work in the art world, having grown up in an artistic family.

‘‘You get to discuss a lot of different things in different ways, look at history and contemporary art at the same time, commission work. It’s all good fun.’’

The irony that a North islander can meticulously point out the detailed fabric of time that is the Dunedin Octagon. Your depth of study and appreciation truly depicts civic pride, both from the past and into the future. Well done Ms Mitchell-Anyon, and welcome to Dunedin. The Octagon certainly has had a varied history and seen so many changes. Being cluttered with tourist buses is but a snap shot in time. We owe it more, in could become a truly magnifcent destination for tourists and public alike.