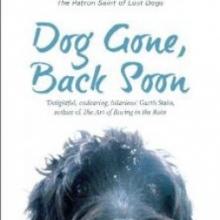 DOG GONE< BACK SOON<br><b>Nick Trout</b><br><i>Allen & Unwin</i>
Dog Gone, Back Soon is the companion volume to the author's earlier novel, The Patron Saint of Lost Dogs. It's about a veterinary pathologist, Dr Cyrus Mills, who arrives home to, rather unwillingly, take over ''The Bedside Manor for Sick Animals''. His late father and mother's veterinary practice in small town America.

To take on the practice in his old Eden Halls stamping ground, Cyrus gives up everything, including his being a veterinary pathologist. An occupation where he neatly avoided awkward, emotionally fraught confrontations, unlike the Bedside Manor where he finds they are everyday fare.

It's not just the animals' ailments and eccentric owners that claim his interest, but also she of the heterochromatic eyes and mysterious past, the attractive waitress Amy.

In the week covered by the story, Cyrus is aided in his diagnoses by his 73-year-old veterinary partner, a Labradoodle and the practice's chain-smoking receptionist Doris. He finds Doris is more knowledgeable about everyone and everything in Eden Falls than, the book states, a CIA drone. All the while the rival veterinary practice, Healthy Paws, seeks to put them all out of business in any way it can.

The book takes its name from a door notice drawn on a bone-shaped card by a then 11-year-old Cyrus for his father and mother's practice. The returning Cyrus finds it in the surgery where it has been saved by his parents. On one side it reads ''Open'', and on the other ''Dog Gone, Back Soon''.

I have to confess I'm a ''sucker'' for animal/veterinary books and Dog Gone, Back Soon joins the long list of those I've thoroughly enjoyed and re-read over the years. I'll certainly be looking out for the earlier book.