How we learnt to identify with our forests and mountains 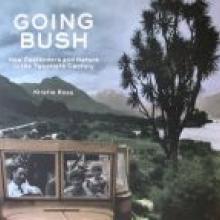 An exploration of some elements of the relationship between New Zealand culture and society.

This interesting book explores some elements of the relationship between New Zealand culture and society.

The first chapter, "Knowing nature", deals with the place of nature in the school curriculum.

Such study was supposed to do much more than merely cultivate a curiosity about the living world.

Its proponents claimed that it would inculcate certain values, cultivate aesthetic appreciation, foster wonder and even lead from nature up to nature's God.

For some, it promised to deter people from migrating to the cities, a matter of some concern in early 20th century New Zealand.

Arbor Day was a central part of this programme.

The second chapter, "Landscapes for leisure", takes a detailed look at the emergence of tramping, as distinct from recreational walking.

One of the country's first tramping clubs was formed in Dunedin in 1923.

Interestingly, tramping proved almost as attractive to women as to men, not unexpectedly giving rise to concern among society's moral guardians.

Tramping was also expected to teach bush survival skills, foster respect for indigenous flora and fauna, and convey something of Maori knowledge and understanding of the natural world.

Even the New Zealand Railways Department fostered the activity with its once very popular mystery tramps.

Chapter 3, "Bitten fiercely by tree-mindedness", explores responses to emerging evidence of adverse impacts of human settlement on the New Zealand environment, while chapter 4, "Peaks, packs, and mountain tracks", deals principally with the extension and administration of the national parks, and with the growth of camping and caravanning.

Ross concludes that the bush and going bush, and all that they represent, are now an intrinsic part of New Zealand culture.

Going Bush appears well researched, although a bibliography rather than just "notes and further reading" would have been helpful.

It is well written and liberally illustrated, and it is an informative exploration of some of the ideas which have informed the changing relationship between society and nature (and especially native nature).

It is a salutary reminder that such relationships are never static and that, for a range of reasons ranging from the treaty settlement process to climate change, they are again undergoing a far-reaching transformation.

- Terry Hearn is a Dunedin historian.