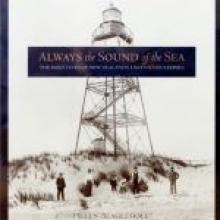 A methodical account of the lives of those who tended the lights on some of our most remote and treacherous headlands and islands.

ALWAYS THE SOUND OF THE SEA
Helen Beaglehole
Potton, $49.99, pbk

By the Books Editor, Bryan James

Helen Beaglehole's first venture into recording the lives of New Zealand's lighthouse-keepers and their families was Lighting the Coast (Canterbury University Press, 2006), and as the first comprehensive history of the service, deservedly successful.

This volume, suggested as a sequel or companion volume by its publisher Craig Potton, is subtitled "the daily lives of New Zealand's lighthouse-keepers".

Do not expect, however, a scintillating narrative.

The author has drawn on numerous official documents, reports, letters, diaries, and some oral histories, to portray methodically the minutiae of life tending the lights on some of our most remote and treacherous headlands and islands.

In relying so much on what might be termed the official written record - written I may say, by many and various hands - the reader must take the rough with the smooth, the good with the bad, and, frankly, it takes some patient deliberation to seek out the gems.

From war-worried Waipapa Point, 1914: "Steamers pass so far off this point that the only difference we can tell at night is a big one from a small one . . ."

From Puysegur Point in the mid-1950s, having run out of food: "Finally, they did shoot a pigeon and I cooked it for Les and the two children, but I wouldn't eat it . . . I thought it was sacrilege".

Beaglehole proceeds through her narrative in a well-organised way, beginning at the beginning (joining the service) and ending with "What kept people there."

As to the latter, it is to be wondered.

Conditions were often hellish, communications liable to disruption for weeks on end; and as the aforementioned example shows, lighthouse-keepers and their families could, and did, run out of food.

After that it was live off your wits until relief arrived.

The routine of lighthouse-keeping is described in great detail, excessively so for the general reader, but this is history and detail is important.

The book does not purport to be other than a superficial account of the domestic lives of lighthouse-keepers and families, but there is sufficient fascinating material to dwell upon; one has to marvel at their fortitude sometimes.

The weather, naturally, played a large part, as did the occasional shipwreck, illness; and the arrival of "de-manning", so rapidly and insensitively foisted on so many who had given years of toil for no great reward, is given due consideration.

There is much of a departmental nature, sufficient to make one wonder how the country has lasted as long as it has without collapsing under the dead weight of innumerable committees, let alone the paper war.

There was even - Beaglehole relates - an official form that had to be filled in at the end of each month to report no need for more official forms.

Writing reports, letters and other paperwork kept one keeper busy for two days a month.

The book is illustrated mainly with snapshots of keeper life, but lacks that most essential reader service: a map.

Most people, I venture, wouldn't have a clue where 90% of the lighthouses mentioned were (and are) actually located.

The absence of any guide to refer to is a most regrettable omission.