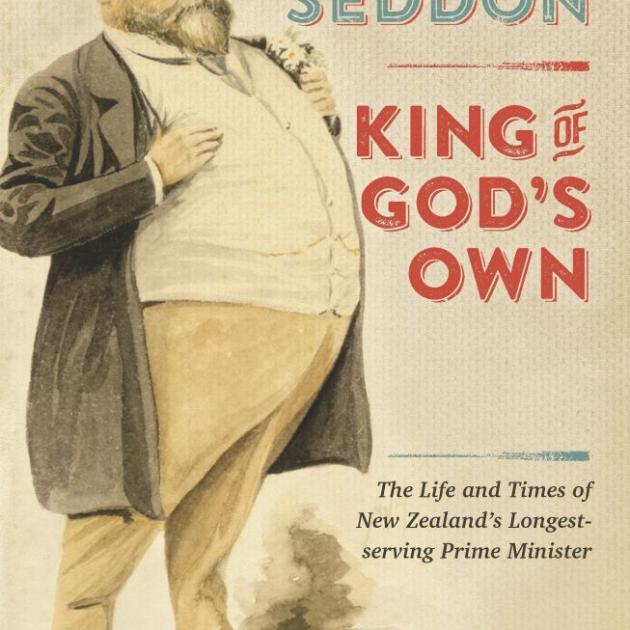 RICHARD SEDDON: KING OF GOD'S OWN<br>The Life and Times of New Zealand's Longest-Serving Prime Minister<br><b>Tom Brooking</b><br><i>Penguin</i>
Call him what you will, Richard John or ''King Dick'' Seddon, the man dominated the political landscape of a country that he liked to call ''God's Own''. Political scientists and historians regularly vote him top dog.

Although his ablest political opponent, ''Farmer Bill'' Massey, ruled for almost as long (1912-25) and arguably governed under far more trying circumstances, Seddon remains our longest-serving leader. Odd, then, that the last full-length biography, and not a good one at that, was written nearly 60 years ago.

After World War 2, historians moved on to look at the Labour Party's leaders and while not forgetting Seddon and the Liberals, broke little fresh ground until the late 1980s and the 1990s, with David Hamer's re-examination of the Liberals, biographies of premiers John Ballance and Sir Joseph Ward and in 1996 of Seddon's great lieutenant, John McKenzie by University of Otago historian Tom Brooking.

Now Brooking returns with King of God's Own, a new and thoughtful re-examination of Seddon. My read of his book shows he had dug into the archives, read the books and also walked in King Dick's footsteps. Some points he raises are personal. Brooking explains Seddon's speech: its dropped aitches lampooned viciously in his day, owes more to cloth-filled southern English ears than to any lack of sophistication from its speaker. Although Seddon sometimes played dumber than he actually was, he was quite well-educated by the standards of his day and class, and he was a skilled tradesman. His surviving library shows he knew the big books and issues of the day, as well as his Bible.

Seddon was also more sympathetic to women's issues, hardly surprising given how much he depended on his wife and daughters to carry his ordinary electorate business (and in the early days, to manage his pub).

Brooking takes us through Seddon's life in 16 chapters that mix the chronological and the thematic. We see his ''North Briton'' upbringings and his emigration to Australia and then to New Zealand following the gold trail. All his life Seddon admired miners, calling them ''nature's gentlemen'' (his highest compliment).

In New Zealand Seddon struggled to find his place in politics. The West Coast was a tough place for a politician with an eye on the national stage, and he had to work hard locally while rising up the ranks in Wellington.

Two chapters look at Seddon's attitudes to Maori. Brooking finds him more positive than some recent historians. Indeed, he is not afraid to take on other scholars such as Judith Binney on Maori, or feminist historians. The book is warts-and-all, but certainly more sympathetic than past portrayals.

Perhaps the biggest surprise for many readers will be Brooking's analysis of Seddon's late-term political philosophy, chapters 14 and 15, entitled ''The Minister of Nearly Everything Shuffles Left, 1902-1905'' and ''A Somewhat Exclusive Humanist Slides Towards Christian Socialism''.

Against the conventional understanding that the Liberals grew more conservative, Brooking shows that Seddon moved somewhat leftward towards the end, offering a middle ground between extremists on the left and right.

Indeed, Brooking ends by wondering about the impact of Seddon's sudden death on his new directions in policy.

''Would we, for example, be a rather more prosperous country had a contributory superannuation scheme been introduced in 1906?'' Probably not, but it's an interesting question.

A big man deserves a big book, and King of God's Own is certainly that: nearly 600 pages of closely spaced type broken by comparatively few small photographs and cartoons. Given what lurks in the country's repositories, I would have liked a few more, but that's a small point. This is an important book about an important man.

Gavin McLean is a Wellington historian.