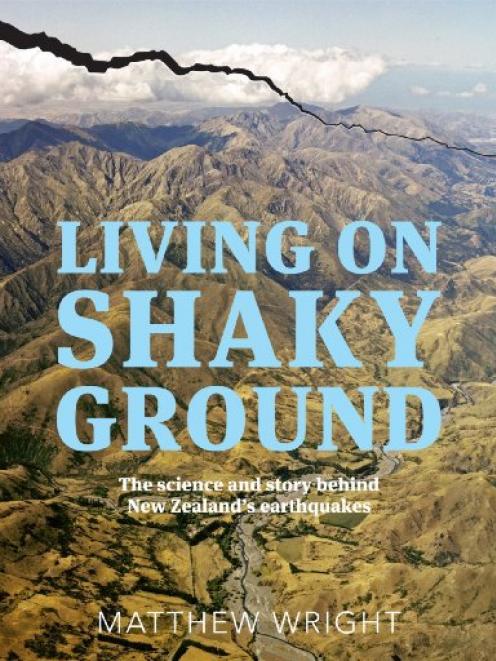 LIVING ON SHAKY GROUND: THE SCIENCE AND STORY BEHIND NEW ZEALAND'S EARTHQUAKES<br><b>Matthew Wright</b><br><i>Random House</i>
The first thing I looked for in Matthew Wright's impressive book turned up on page 9: where did Dunedin/Otago stand in the earthquake-risk sweepstakes?

The map page showed quakes in Fiordland in 2003 and Dusky Sound in 2009 as the closest, which does seem a comfortable distance from Dunedin, though none at all from Central Otago and the Lakes District. Should Dunedinites at least sit back and relax? Not a hope.

The problem is a planetary one, and what control does mere humanity have when it comes to the weather and tectonic plates shifting this way and that on collision courses.

Unfortunately, to quote Wright, ''the whole New Zealand archipelago, with its volcanoes, earthquake faults and systems of underwater trenches, ridges and volcanoes stretching in an arc to the north, was a product of tectonic collision between the Australian and Pacific crustal plates, great slabs of rock that floated on the semi-liquid asthenosphere below''.

Although there seems to be one too many ''volcanoes'' in the above quote, Wright's easy text and myriad photographs, maps, diagrams and charts make following ''the science and story behind New Zealand's earthquakes'' fascinating, yet also disquieting, especially when fault lines are consulted.

Recorded earthquakes in New Zealand date from 1773. From then, Wright examines the effect the quakes that followed had on European settlement, and the death and destruction in their wake.

Ian Williams is a Dunedin writer and composer.