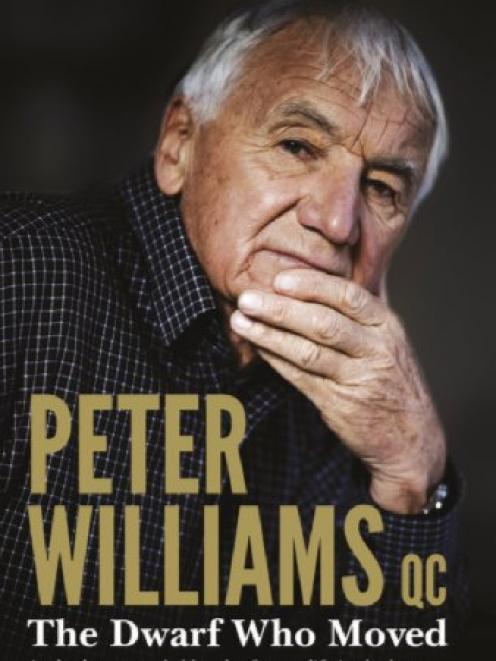 THE DWARF WHO MOVED: AND OTHER REMARKABLE TALES FROM A LIFE IN THE LAW<br><b>Peter Williams QC</b><br><i> HarperCollins</i>
On October 8, 2014 at 11pm, many New Zealanders will have stepped outside to view a lunar eclipse in a starry sky. Imagine then, lunar eclipse or otherwise, someone who, for 20 years, has not been free to walk outside and simply look at the moon or the stars.

This then is the subject of ''He Saw the Stars'', the last story in Peter Williams' book The Dwarf Who Moved. A moving story that reveals the humane side of a prison superintendent and Williams' concerns for the welfare and rehabilitation of prisoners.

For Williams is more than a very able Queen's Counsel and criminal defence lawyer, he is also a humanitarian. In the course of his long career he has defended, and in some cases befriended, the high profile Ronald Jorgensen, Arthur Allan Thomas and ''Mr Asia''. But it was his defence of the sad and the derelict, the casualties of life, that fuelled his resolve to re-create the Howard League for Penal Reform.

Some 30 years ago, Williams was elected president of the league, whose members came from all walks of life, all interested in justice and injustice. Their activities were wide-ranging and included submissions on New Zealand's penal system and violent offending. Williams and the league were strongly opposed to the ''three strikes'' legislation. As the book details, the league was, shall we say, ''hijacked'' at a time when Williams was extremely unwell.

He and other long-standing members resigned, leaving Williams sad, but extremely proud of the league's reputation for integrity, honesty, and altruism garnered over almost 100 years.

The book goes from detailing his work in the freezing works, to 10 days' imprisonment by ''Whisky Bill'', from his association with James K. Baxter, to his friendship with and legal representation of New Zealand First leader Winston Peters. Williams wrote the manuscript for the book over eight years while suffering from cancer and enduring chemotherapy, radiation therapy and drug treatments.

I found the book very readable, his dry delivery at once humorous, moving and in some cases horrifying, the latter in that, in the 21st century, people can still be so badly and inhumanely treated. Indeed, Williams' hope is that his book will humanise its reader by granting a deeper understanding of the legal process and the characters involved.