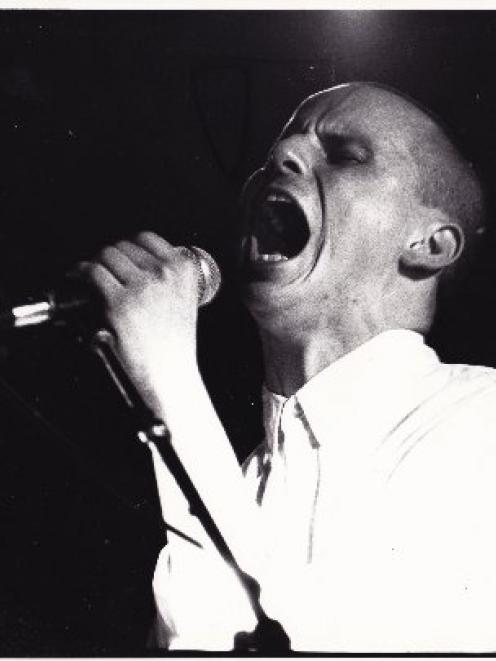 David D'Ath of The Skeptics.
A new film helps remind us of the influential role of The Skeptics in Kiwi rock history, reports Scott Kara, of The New Zealand Herald.

There's a poignant and powerful piece of footage in a new film about The Skeptics in which singer David D'Ath strolls around the Gluepot stage as the primal and percussive All Sum Null agitates over the top of his vocal mutterings.

Even when he's got his back to the camera, which is most of the time, he has a commanding presence.

This performance, captured by veteran film-maker Bob Sutton at The Skeptics' final show on July 13, 1990, is even more special because D'Ath would die of leukaemia two months later, aged 26.

With a singular voice that could move from crisp and high to fraught and pained, and his oddball dance moves, D'Ath was a formidable frontman and talented musician.

His death also brought to an end one of the most inventive bands to come out of New Zealand - and it's The Skeptics' story that is told in Sheen of Gold, screening as part of the International Film Festival.

''The [Gluepot] footage really brings home the power, and the mixed emotions of that occasion and what a remarkable performance it was,'' says Sheen of Gold director Simon Ogston.

Ogston, whose past music documentaries include Rumble & Bang about '60s Christchurch garage rockers Chants R&B, says much of his inspiration during the making of the film was to do justice to D'Ath's memory and his musical legacy.

''And I don't want to overstate it, but it was a guiding principle for me.

''He set the benchmark really, because he had music and lyrics of such quality that I didn't want to make a film which let that down.''

Ogston never saw the Skeptics play. However, he knew of some of the band's songs, including AFFCO, the propulsive and punishing track from 1987 that gained notoriety because of its graphic video.

But it was after a friend played him Amalgam, The Skeptics' classic work from 1990, that Ogston became a big fan of the band.

''From there I did a little bit of investigating, and there was so little information out there about the band, which was intriguing to me. But there was an interesting story there, and they were unique, and there are lots of words thrown around about them: dark, edgy, intense.

"But they were also a band with a whole lot of melody and subtlety and also a sense of humour, and musically they had a keen intelligence.''

Sheen of Gold, a name taken from a song on Amalgam, is a must-see for Skeptics' fans.

But the little-known story of this band formed in Palmerston North in 1979 (''We were seen as really really unusual, and probably as a major threat,'' says original member Robin Gauld of their Palmy roots) deserves a wider audience.

Just like The Skeptics' music, their story is about unbridled creative ambition, intense dramatic beauty and sadness.

''I think it's about the people as much as it is about the music,'' says Ogston.

''And it's about New Zealand. It could only have happened here, and it's an important story in our social, cultural and musical history.''

The band members' take on the music these days is particularly insightful, with Nick Roughan offering a hilarious and candid appraisal of their earliest recordings (''I think the music is silly. Make it stop.'').

Then there's guitarist John Halvorsen (also of the Gordons and Bailter Space who brought his ''horror movie guitar'' to the band in the mid-'80s) having a jolly old time re-creating the band's sonic chaos using an electric razor and his guitar to conjure a sound reminiscent of an amplified dentist's drill as it gets stuck into someone's teeth.

''I think the film gives a lot of insight into the music and how it was made,'' says Ogston.

Although AFFCO remains The Skeptics' best-known song, Ogston showcases the full range of their vast catalogue - from the menacing, yet soulful and almost funky, lope of Sheen of Gold and the fractured and dissonant weirdness of La Motta, to the urgent primal churn of seven-minute, three-part epic Agitator.

''It's such rich music that comes from a rich body of music, and I'm still discovering new stuff about it, and that's what so great about their music.''

Skeptics albums III (1987) and Amalgam (1990) have been remastered by former Skeptic Nick Roughan and will be reissued on vinyl and digitally this month.

The remainder of the band's discography will follow in the coming months.