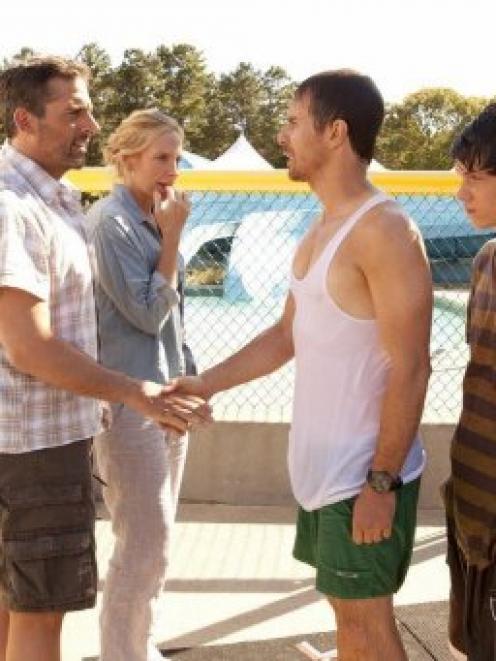 The Way Way Back (Rialto) begins with 14-year-old Duncan (Liam James) reluctantly on his way to spend the summer with his mum, Pam (Toni Collette), her new boyfriend, Trent (Steve Carell), and his daughter, Steph (Zoe Levin).

It would be few teenagers' pick of a dream holiday and it is made worse by the fact Trent is a jerk who likes to niggle at Duncan with superficially friendly advice.

Once they are at the beach house, things are as bad as Duncan imagined and he is soon roaming the seaside town to avoid too much contact with Trent.

On his travels, he stumbles upon Water Wizz Waterpark and strikes up a friendship with the park's manager Owen (Sam Rockwell). Owen is no-one's idea of a role model but he has a kind heart and he offers the awkward teen a job.

Duncan is thrilled to have a place to escape to and keeps his acceptance into another world a secret back home.

So while the teenager is taking on responsibilities, the adults are behaving badly, drinking too much and flirting with the wrong people.

Usually this the cue for disaster, but The Way Way Back is a sweetly generous film that lets people muck up and still find their way back, with plenty of laughs along the way.

Best thing: It has a stunning cast and they all get their moment in the sun.

Worst thing: This is sweet to its core and I would not change a thing.

See it with: Memories of how bizarrely unreasonable adults were when you were 14.