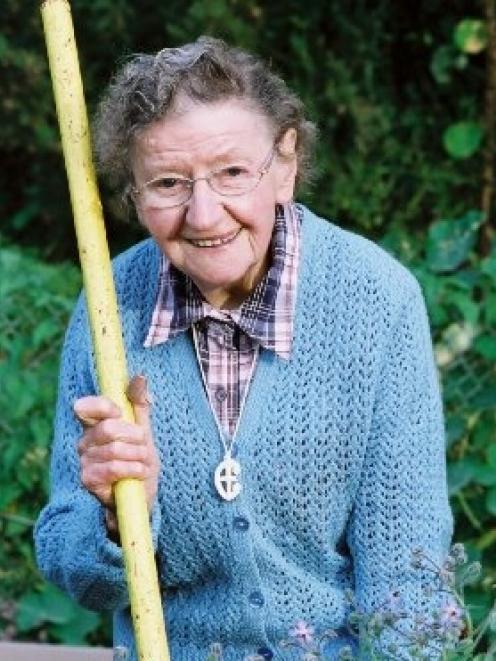 Sister Loyola in the Island Bay gardens of the Sisters of Compassion. Photo supplied.
There are riches to harvest from new documentary Gardening with Soul, writes Tom McKinlay.

In the opening frames of Gardening With Soul, Sister Loyola shuffles out to her garden on a cold Wellington day, pausing to hear some birdsong.

Her plants carry a dusting of snow and she stands for a moment, considering her options.

''I'm just wondering whether it would be wise to wash the snow off them or what to do,'' she says.

The character confirmed over the following 100 minutes of documentary is quickly revealed.

''But I think I will let it be, because silverbeet is pretty tough stuff. Just a bit more patience is required,'' she decides, employing the wisdom of 90 years.

The film is the work of Wellington film-maker Jess Feast, who set out to record the wisdom of Sr Loyola for posterity after hearing a radio interview on the occasion of her success in a gardener of the year competition.

Blessed herself with two aged grandmothers, there was something about Sr Loyola that immediately appealed to Feast.

''I am quite aware of the value of that old knowledge. I have a feeling of wanting to preserve that and also to enliven it,'' she says.

At the same time, the nun's work in the Island Bay gardens of the Sisters of Compassion captured notions of sustainability in microcosm, which also chimed.

''She just embodied all the solutions rather than the problems,'' Feast says.

Gardening with Soul follows Sr Loyola as she tends the sisters' domestic garden and shares advice at a neighbouring community garden she helped initiate.

This is a busy woman, with things to do. Her pace is determined rather than quick, but there is always the sense that the camera is working hard to keep up.

The film also examines Sr Loyola's life, through much of the 20th century, discussing sorrow and loss, prejudice, corruption, service and love, leafing through a diary of changing times.

''I think capturing a personal view of how our society has changed is really interesting, too,'' Feast says.

''I was always fascinated by that when I spoke to her. How attitudes in society have changed. In good ways and bad.

"But then on the other hand, maybe our attitude to money and sharing is not as strong as it was.''

There are no good old days or bad old days, there are shades of grey to it all, Feast says.

''It is through people like her and thinking about those things that we can see where things have improved and where they haven't.''

In Sr Loyola, the film-maker has an unlikely star of rare, unvarnished charisma.

''There is really something about her that people connect with,'' Feast says.

''And that's long before I came upon her. She's always been like that.

''There's a non-judgmental love she really does live and I think that is probably it.''

It is something the sister had to work on, to develop as an approach to life as part of her religious order, Feast says.

''She is aware that is something that she believes in. She has to practise, though. It is not like she's this kind of saint that never feels frustrated.

''I really liked that about her. too. She's really human.''

The combination of the practical hands-on gardener and woman of soul allows the film to operate on several levels.

''The sacred and profane live very much side by side in her mind.''

Indeed, Sr Loyola is as forthright on the sins of predatory priests as she is on the ineffable nature of spiritual connection. Then she's just as engaged on the subject of compost.

Here she is on women and the Church: ''I feel very strongly about the female side of things. And I have always felt that in our church we emphasise the male side too much.''

And on compost: ''Worms enjoy darkness. So they know what they are on about. So we just follow their lead and work with them in the way they like best.''

And on the lesson on life that a garden provides: ''The garden is saying to me all the time: life is evolving and if you are going to spend the last few years of your life worrying about how it is evolving, you are wasting your time. Just enjoy it.''

Feast says she was was particularly interested in talking to someone who had lived a spiritual life for as long as Sr Loyola had.

''Who had had the time to ponder those spiritual questions over a long period of time and is now able to look back on that life, that spiritual life, where she got to with it.

''And I really liked where she got to with it. Because basically what happened to her was that she just got more and more and more open.''

This is a woman who did a permaculture course in her 80s.

''I see it as quite a philosophical film and quite a metaphorical film,'' Feast says.

''It is definitely about her. It is a portrait of her. But when I am making documentaries, I am always trying to layer them. So it is not about one thing, it is always about lots of things.

"And hopefully those things have connections to each other that people can make for themselves.''

Screenings
Gardening with Soul screens as part of the International Film Festival at The Regent Theatre tomorrow at 1pm, and Tuesday, August 20 at 10.45am. Then at the St James, Gore on Tuesday at 1pm and on Saturday, August 24 at 1.30pm. Director Jess Feast will attend tomorrow's screening in Dunedin.