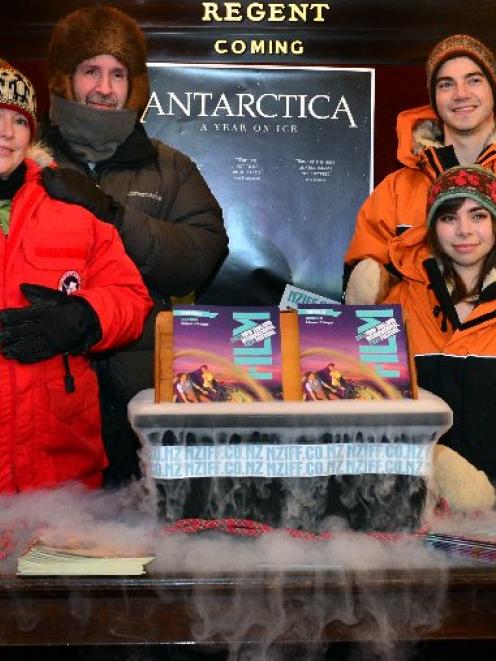 Director, producer and photographer Anthony Powell, of Christchurch, (second from left) and his wife and film-making colleague Christine Powell, join New Zealand International Film Festival volunteers Tom Tremewan and Sian Gillard (at right), both of Dunedin, before an opening night screening of his film Antarctica: A Year on Ice, in Dunedin last night. Photo by Peter McIntosh.
A "christening' and plenty of Antarctic myth-breaking last night were features of the New Zealand International Film Festival opening at Dunedin's Regent Theatre.

Mr Powell, who attended the screening with his US-born wife Christine, said his film aimed to break down a few myths about the Antarctic winter, and provide an insider's view of that chilly season.

''The [Antarctic] winter has never been shown on film before,'' he said.

He and his wife, who met in a bar on the frozen continent, have spent many winters living in the Antarctic, working, respectively, at New Zealand's Scott Base and the nearby American McMurdo Sound facility.

Many people imagined the Antarctic winter was perpetually dark and bleak, but the reality was greatly different.

He has gone to great lengths to share his insider's view of the Antarctic, having modified and developed digital filming equipment over the years to capture previously unrecorded images.

Organisers said the festival screenings - which run until August 25 - marked a first for New Zealand cinema, as all the Dunedin films were being screened in digital format.