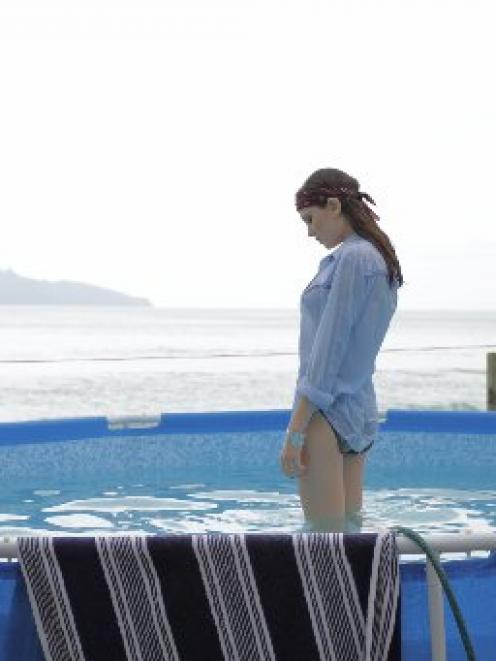 Juliet (Derya Parlak) contemplates love in a small pond.
Rash lovestruck teens, passionately warring families, secret liaisons, drugs, suicide - Romeo and Juliet is one of the world's best-known stories. A Kiwi version, which not only sets the tale in a caravan park, but turns it into a rock opera, is screening as part of the International Film Festival. Lydia Jenkin, of The New Zealand Herald, went along.

It started as an extra-curricular project for ex-Screaming Meemees Michael O'Neill and Peter Van Der Fluit in 2004.

The pair, who run Liquid Studios, a composing and recording service for advertising, film and TV music, wanted to create a concept album in their spare time to keep their creative juices flowing.

A rock opera based on Romeo and Juliet was their favourite idea and, over the next six years, they wrote and recorded 40 tracks, varying from rock to hip-hop, pop to gospel, essentially creating a libretto.

The Bard made it easy. Iambic pentameter makes perfect sense in hip-hop. The natural cadence of nearly every phrase overrides the hard consonant endings of most English words.

The sheer drive of the story creates emotional signposts that music can reinforce. To us, it seems Shakespeare was meant to be sung.

Then they shared it with a few key international contacts, and ended up collaborating with the Arts Educational School of London - whose president is Andrew Lloyd Webber - to turn it into an off-West End musical.

It was staged in June 2010, but O'Neill and Van Der Fluit could already see a life for their project beyond the production: turning it into a New Zealand feature film.

They asked Tim Van Dammen, best known as a music video director, to direct Romeo and Juliet: A Love Song.

There's no dialogue - the actors lip-synch with the recordings of the libretto (many tracks have been rerecorded by various local singers since the project began), and the action unfolds in tandem.

Set at the beachside Verona Campground, it follows the young Juliet and Romeo, played by models Christopher Landon and Derya Parlak, and their families, through violence and heartbreak in trailer-trash chic, colour-soaked, fashion-shoot style.

As Van Dammen explains: ''This is Romeo and Juliet for the YouTube generation ...

"The everlasting story unfolds afresh through a driving, sometimes high-camp, musical score set against the swappa-crates and spliff culture of trailer-park boys; the sublime cinematography against the dilapidated caravans and outre interiors.''