Though much of Human Traces was filmed in The Catlins, it is in fact set on a subantarctic island.
A low-budget yet ambitious inclusion in the New Zealand International Film Festival, Human Traces keeps its audience guessing, writer-director Nic Gorman tells Shane Gilchrist. 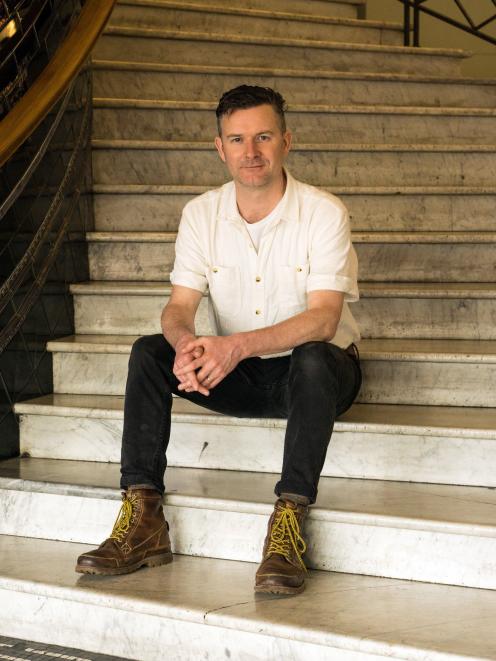 Nic Gorman.
Yes, Human Traces does feature plenty of water, waves and wind. Yet New Zealand writer-director Nic Gorman uses nature as a tool for incarceration rather than relaxation as he sets his feature-length debut on a sub-Antarctic island.

After playing with horror tropes in his 2013 zombie short Here Be Monsters, the Christchurch-based auteur has focused  this time on a spot some 750km south of New Zealand.

A psychological thriller, Human Traces is a three-act exploration involving husband-and-wife ecologists Sarah (played by Sophie Henderson) and Glenn (Mark Mitchinson) and a mysterious stranger, Pete (Vinnie Bennett), whose arrival prompts paranoia and deception and disrupts the world of the couple, there to monitor the island’s ecosystem.

By dividing his film into three chapters, each told from a different character’s perspective, Gorman assembles then reassembles the narrative, a device that ultimately leaves the audience guessing.

Thus it’s no surprise he’s a little wary of divulging too much about the plot of his film.

"I don’t want to spoil it for potential viewers, but we do finish the film with a close-up on Pete’s face, this image of him gazing out over the water, looking north, which touches on his ambivalent relationship with society," Gorman (39) explains from his Christchurch home.

Instead, he talks about the weather.

Shot over seven days at Haylocks Bay on Banks Peninsula, then 18 days at Long Point, in the Catlins, the project was not without its challenges, including a filming session on a boat near Akaroa Head that led to widespread seasickness, Gorman reflects.

"And in the Catlins, we had a bit of everything. It was physically demanding; we’d work 12-hour days, lugging things around on rocks. We had a little hut for shelter. All of this helped bind us together.

"All of this added to the film’s idea of elemental forces. One day we had a series of hail storms roll in, one after the other, so we’d have to hunch over the camera with umbrellas.

"But that’s what we wanted. It was hard work but we wanted the audience to get that sense of raw nature. There is that notion that you can’t escape the physical aspects of such a place. And the waves and constant wind are a big part of that.

"I also talked to the composer about the sonic qualities of waves and wind, so we had different degrees of sounds. The idea was to use the sound to create the tension, and to mirror what was happening in the characters’ heads at times."

Gorman describes his film as low-budget. Having received $60,000 from the New Zealand Film Commission to develop his script, he later got $850,000 from the commission to produce the film (Wellington company Random Film was also an investor).

Those budgetary constraints meant all involved had to work both quickly and cleverly.

"Sure, if it was a highly emotional or challenging scene, we’d factor in extra time. But often we’d set up the shot as quickly as we could and move on. I think that gives the outdoor scenes a nice energy.

"We started editing in January 2016 and finished in December that year, although editing wasn’t a constant process. The narrative structure was complicated, but we didn’t want the film to come across as too tricky. I think because this was my first film, it needed to have that time and attention.

"We also had test screenings, and showed it to friends and others for comment. Sometimes you can get lost in the structure so it was important to have some outside eyes take a look. It is very useful to watch your film with other people; it unlocks certain things."

Gorman admits he does get a "bit nervous" when he contemplates how his film will be perceived, largely because he recognises all the work done by others to bring such a project to fruition.

"Given it’s a low-budget film, people haven’t exactly been paid a lot for their creative energy. Also, making a film takes a long time. Six years work has gone into this, and after 90 minutes on screen it’ll be all over."

The use of differing points of view, in particular the assembling and breaking down of assumptions, touches on a range of techniques employed by influential directors, such as Wim Wenders (Paris, Texas), David Lynch (Wild at Heart, Twin Peaks) and Lars von Trier (Breaking The Waves, Melancholia).

Although Gorman is quick to point out he’d "never want to rip off someone else’s idea", he does confirm both Wenders and Lynch have been seminal influences.

"Their films had quite an effect on me when I started watching films and you do carry that with you.

"However, I’m not a particularly technical director so I can’t really mimic others’ styles. For example, if I was to attempt to emulate Lars Von Trier, the result would be very different.

"I was trying to put the audience inside a character’s head, only for that perspective to be wrenched when another character’s point of view is presented."

A high school teacher for several years, Gorman says he and his wife are taking "time off" from their careers to chase other interests which, for him, primarily mean acting and writing. He has just completed a new script.

A graduate of Ilam School of Fine Arts, he studied film as part of his honours degree on American studies before moving from Christchurch to Wellington in 2004 to complete a master’s in creative writing, the result of which was a novel and a series of short stories, one of which, The Unicorn, was made into a short film by a friend.

His short zombie film, Here be Monsters, won best short film at the New Zealand Film Awards in 2013, and it was around this time that he formed the idea of setting a feature-length film in the subantarctic.

"I’ve always been attracted to islands, the idea getting on a boat and going to a place surrounded by ocean. They often have interesting characters on them.

"I’d read quite a bit about the subantarctic islands, which are so isolated. Take the Campbell Islands, which have quite an interesting history: different scientific groups have gone down there; during World War 2, coast-watchers were stationed there to look out for Japanese submarines; there were also shipwrecks there.

"The subantarctic islands are fairly inhospitable. They have a primal power about them, so I was fascinated with this idea of how people — even those who are there temporarily — cope.

"You have to write down themes when you are applying to the New Zealand Film Commission for funding but, to be honest, they are not something I really think about, because everyone takes something different from a film.

"That said, the notion of restlessness has always been fascinating to me, especially because as you get more settled as an adult, there are still feelings of wanting to escape."

Gorman also plays with themes of sacrifice and rejuvenation in Human Traces, including more than a couple of references to "whale fall", the process by which a whale dies and its carcass sinks to the ocean floor, where it provides a bounty of nutrients for deep-water creatures.

"We toyed with the idea of naming this film Whale Fall but, obviously, there is a famous New Zealand film that has whale in its title," he says of the 2002 movie Whale Rider, based on the novel by Witi Ihimaera.

"It does touch on the idea that we are prone to forces we can’t control, that we are part of a bigger picture. And when you are at the bottom of the world, these things perhaps come into clearer focus."

• Human Traces screens at the New Zealand International Film Festival on August 23 and 24.