Death and its acolytes 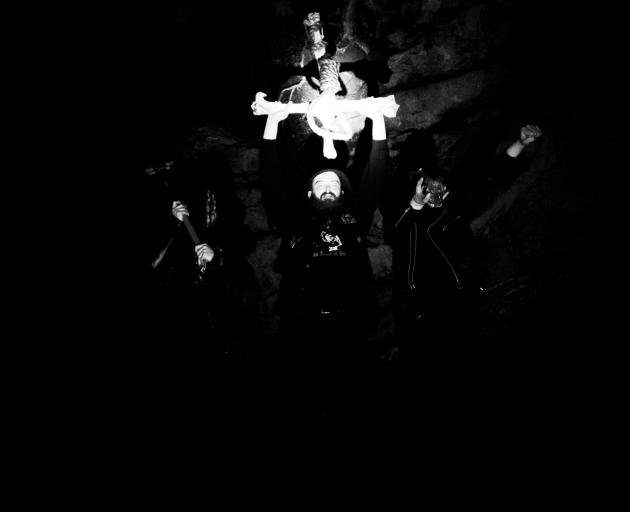 Methchrist (from left) Daniel Bloxham, Benjamin Cochrane and Ollie Trainor. Photo: Supplied
If you're feeling a little itchy it could be because Methchrist haven't played a gig here since January, but that all changes tonight. In a vile ritual of hatred at the Crown Hotel, the solar anus will expand and from its foul depths spew forth a torrent of pure evil into the expectant mouths of the cult elite. There will be no escape, and only the true will survive.

It's what we've come to expect from the band described by music blog No Clean Singing as sounding "like a dog with cancer ate a rat with leprosy" and, ahem, deposited it down your throat.

Since I last talked to them in September, Methchrist have been playing out of town, most notably supporting Canadian outfit Blasphemy and Kiwi death-metallers Heresiarch at their Auckland and Wellington gigs. Blasphemy pioneered the war metal genre in the '80s and are infamous for brutal, ugly riffs, and grave desecration, so playing with them was an amazing experience for the trio.

"Black Winds, the lead singer," Benjamin Cochrane (bass) recounts, "I thought he was gesturing for a bottle opener but he was actually after a lighter, so we followed him out for a durry and he had these speed demon sunglasses on, lifted them up and he was like, `You guys are Methchrist ... You got any?'.

"And we had this really stilted conversation with him, eh. We were like, uhh, so what do you think of New Zealand? And he was just, like, `What?'."

"Really [expletive] lovely dudes though," adds Ben. "Everyone was just very much on the same buzz, just [expletive] adulation and worship of Blasphemy. They played amazingly, and (New Zealand band) Vassafor were just next level."

For a band who've been around for just a couple of years, playing with the originators of the genre is pretty incredible.

They think it could be down to the name, which pitches the biggest demon in New Zealand society (meth) against the traditional symbol of all that is holy (Christ) and in doing so appeals to the two major markets: meth heads and Christians.

But I think it's more due to the fact that, especially on a hyperlocal level, nobody is making music as insane as Methchrist. And everyone has a little part of them that just wants to suffocate in pure spite.

"It's kind of a surprise," says Ollie.

"Yeah a pleasant surprise," adds Ben, "because we just kind of wanted to do our thing. We formed out of the ashes of With Teeth and Machina Rex and stuff, and we all just got into the room and learnt three songs in one rehearsal and then decided it was a good idea."

If you're still jonesing for another hit, their next album is out on cassette soon. It's a split with Australian band Self Harm they recorded themselves in their practice space and should be a precursor of what's to come on their next full length.

"We've kind of progressed from those grind/powerviolence roots. We were approaching it kind of like a sprint on our early ones, but now we're getting the most out of those real nuggety riffs," says Daniel Bloxham (drums).

"Give them time just to pummel out," Ollie adds. "But also have them longer, they're double to triple the length of the early ones but they're three times heavier and [expletive] more brutal."

"I think, at the end of the day, the next release has to be significantly better than these two," Ben says.

"We want it to be as hard to listen to for people as for us to play," Ollie adds. "First and foremost we want to make the most insane thing that we can, to our capacity."

"To be as disgusting as possible," agrees Ben.

• Surrender to the might of death at the Crown Hotel, tonight (Saturday July 28), with The Rothmans, Ayamvoid, Bus Puncher and Funeral Burner.