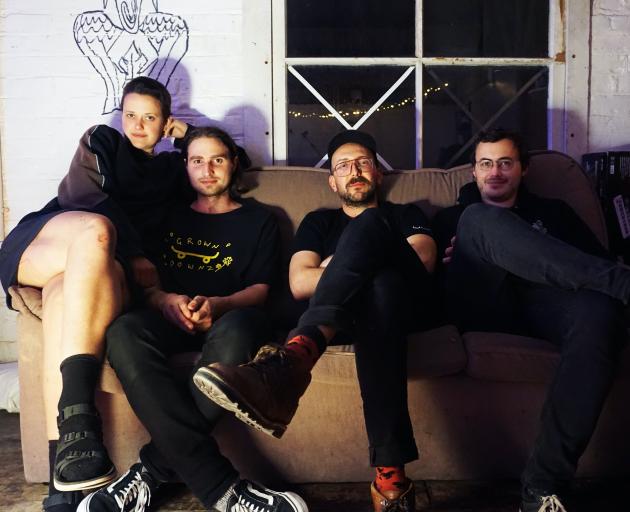 Asta Rangu are (from left) Julie Dunn (keys), Josh Nicholls (drums), Angus McBryde (bass) and Richard Ley-Hamilton. They are touring with Males. PHOTO: SUPPLIED
In 2012, Males, Astro Children, Two Cartoons and Kane Strang were the main stays of the local Indie scene. Males’ catchy single So High was thrashed by student radio stations across the nation. Then, in 2016, without even a bang or a whimper, the trio played their last show, before going on an extended hiatus.

Lead singer and guitarist Richard Ley-Hamilton headed to the United Kingdom on his OE, ending up in Bristol. Bassist Sam Valentine and drummer Paul McMillan went off to do their own thing, too. It’s an all too familiar tale when it comes to Dunedin bands.

What usually doesn’t happen, though, is a surprise comeback five years later. But that’s exactly what’s happening, well, sort of.

"The first thing that I thought about is it seemed a little self-indulgent," Richard says about playing at the Welcome to Nowhere festival in two bands.

It marked the start of the Asta Rangu and Males Split Single Release tour, which will see the return of Males and the introduction of Richard’s new project, Asta Rangu.

"It kind of came off the back of having a little tour meeting and thinking about bringing another band on the tour, and because, as you know with so many Dunedin bands, everyone’s in each other’s bands [so] we thought we could probably add one or two other people in the car and end up having another band with us.

But aside from the practical two-for-one benefits, it’s also a pretty cool idea.

Asta Rangu and Males explore two different sides of Richard as a songwriter. It’s like the ghost of the past meeting the present. Asta Rangu is darker and denser sonically, with more abstract lyricism, while Males is adrenaline-infused garage pop.

"It is kind of split parts of my musical life anyway, kind of, historically or genre wise, it is a nice way to meld those two things together or share those two worlds, kind of both sides of the coin.

"And Males never really had a good farewell I thought, because we had our last show in ... I think it was January 2015? Or maybe January 2016. And then we released the album like just on Bandcamp and never played another show, just went on hiatus. I think we only played most of that None The Wise album once or twice? Maybe once if anything."

The differences couldn’t be more clear than on the Asta Rangu/Males split. One song is short, optimistic, it feels like a carefree summer circa 2013, while the other is a jagged and discordant fuzzfest. Lyrically though they explore similar themes, but in very different ways.

"I just got really into the idea of really enjoying writing prose and free verse, just kind of as a creative tool, it’s a really fun way to write lyrics and you kind of end up with a very different form of lyricism. There’s a lot more packed into the songs in terms of that. But yeah, it’s a lot more vivid imagery rather than immediate pop songs.

"But I do like writing things with hooks, so I think no matter what, Asta Rangu will retain a bit of that poppy nature, but buried in something deeper but more chaotic."

So it’s not a Males comeback, but it’s both a chance to reflect and reminisce for us oldies (we’re closer to 30 than 20 after all), as well as an introduction to something new.

Asta Rangu and Males I Dream/Clear Lake New Zealand Tour, Saturday, February 20, at Dive, with support from Juno Is. Tickets $20 from undertheradar.co.nz

Listen to the split at astarangu.bandcamp.com