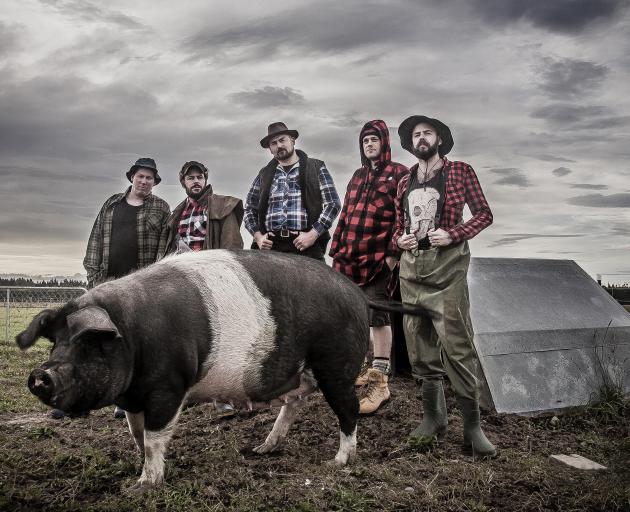 I fondly remember the day 16-year-old me came home from school, switching on the TV to semi-ironically watch mother of the nation Erin Simpson attempting to capture the young teen demographic, only to be aurally assaulted by a technical death metal band called Blindfolded and Led to the Woods.

It seemed like a mistake, yet it kind of didn't. The Erin Simpson Show was for kids, but it also made obvious attempts at being "cool". They had a live three-piece indie band for example, who played rockin' tunes from a mezzanine before each ad break, and they had a catchy theme song you could buy on iTunes.

However, it was a mistake. Stu who plays guitar and writes the songs for Blindfolded explained to me how it happened.

"We were practising behind Whitebait Studios, which was Jason Gunn's kind of TV studio place, and they heard a band practising which wasn't us. They were like an indie band or something. And the producer came round to the storage sheds and she was looking for that band...

"We kind of realised what was going on so we kind of, like, lied to her and said we were that band and then agreed to go on the show.

"And then obviously the show happened and like it's filmed in such a way that once it's filmed it goes on air the next day so they couldn't go back on it, it had to go on TV the next day, and it was just really awkward, eh," he laughs.

A death metal band performing on a children's television show was hilarious enough that the clip pretty quickly went viral (by 2010 standards) and "Technical Death Metal Band on Kids TV Show" currently sits at about 500,000 views on YouTube. Weirdly enough it also kind of ended up being their big break.

Since taking on the after-school television scene, the Christchurch-based quintet have gone on to tour with American mathcore pioneers The Dillinger Escape Plan and played to thousands with Brazilian heavy metal legends Sepultura. They also released two positively reviewed full-length albums and have a third on the way.

"I think that the main thing that came from that was the worldwide recognition that kind of came out of nowhere.

"We've actually played with a lot of international bands from around the world and they all kind of know who we are, which is really weird, so it was definitely a worthwhile thing looking back on it."

I don't want to overshadow the quality of the music by talking too much about the backstory though, because it's really good. It's impressively technical, but unlike some math-adjacent bands it doesn't sound like numbers. It's immediate and brutal. It demands you stand to attention and then beats you down.

"One of my biggest things that I want to achieve with the music we're making is for it to not sound like anyone else.

"I try to go in with a completely open mind and create something that if I were a listener I would want to hear."

Stu says that doesn't mean they take themselves too seriously.

"People should come along. If it's something they've never kind of seen before I think this gig would be a really good way for someone who's maybe thought about going to a metal show but never done it."

Blindfolded and Led to the Woods, with Tuscoma, Methchrist and The Rothmans
Fifty Gorillas, tonight at 9pm.