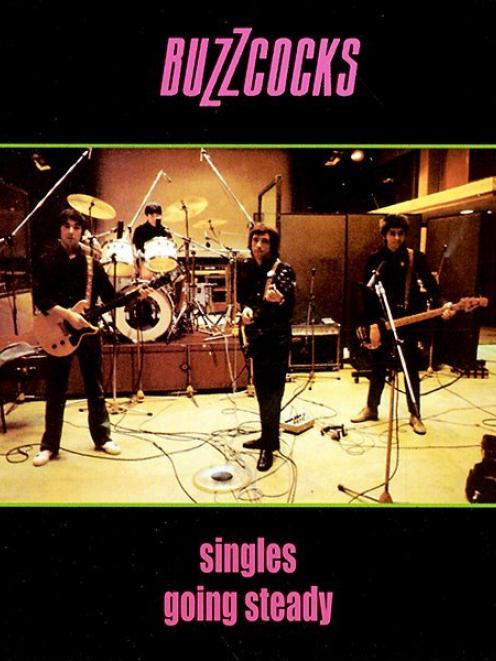 The Buzzcocks' 1979 compilation Singles Going Steady was intended as an attention-grabber for the US market. Assembled chronologically from A-sides and B-sides from the band's 1977-79 UK singles, it stands as a sublime profile of the finest British power-pop unit to have emerged from the punk era.

Previously fronted by Howard Devoto but led here by guitarist and co-founder Pete Shelley, the four-piece has clipped the ragged edges from its early sound and has begun to truly inhabit its name.

''Buzzcocks'' makes sense when confronted with the band's hard-hitting guitar-driven music, the word suggesting elements of noise, sensation and attitude that are reflected in bristling energy and forthright lyrics.

Shelley sets the band apart from its punk contemporaries with higher register singing that occasionally switches to falsetto. His lyrics hint at his bisexuality, something he would not talk explicitly about until the release of solo single Homosapien in 1981, but mostly they address the everyday musings of the lovelorn, the frustrated and, in the case of Orgasm Addict, the oversexed.

Six of the remaining A-sides that round out side one are classic Shelley-fronted pop tunes, precision-driven by a tight rock unit that understands the magic of melody and the micro-pause as well as it does the adrenaline rush and the pedal-to-the-metal power chord. What Do I Get?, Ever Fallen In Love (With Someone You Shouldn't've) and Everybody's Happy Nowadays are each so heavily infested with earworms that they compete busily for territory long after listening.

Most British bands of the era would have killed to claim as their own the B-sides that make up side two, but across the Atlantic the album made little impression. With three studio albums and this dud-free compilation under their belts, the already faltering Buzzcocks soon called it quits.

Reunions and augmented line-ups have followed. This year, Shelley and Diggle bring the Buzzcocks to play four dates in New Zealand between April 27 and May 1.