Clues among the wreckage 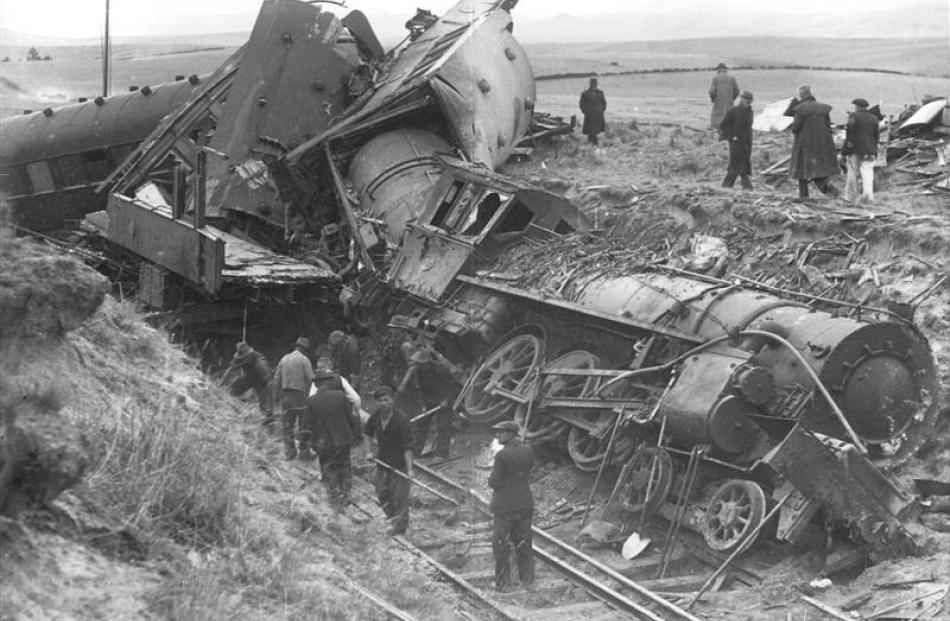 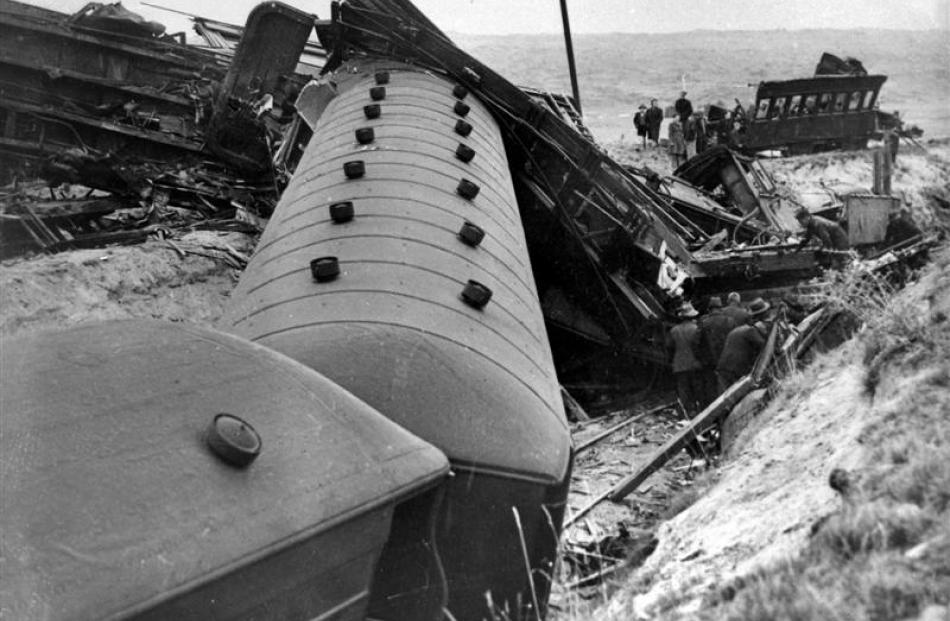 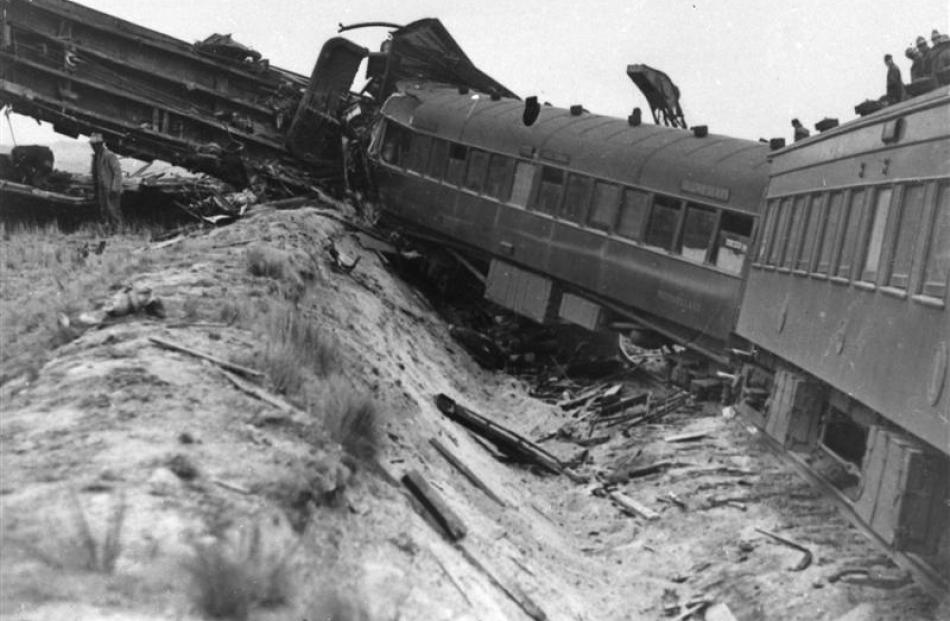 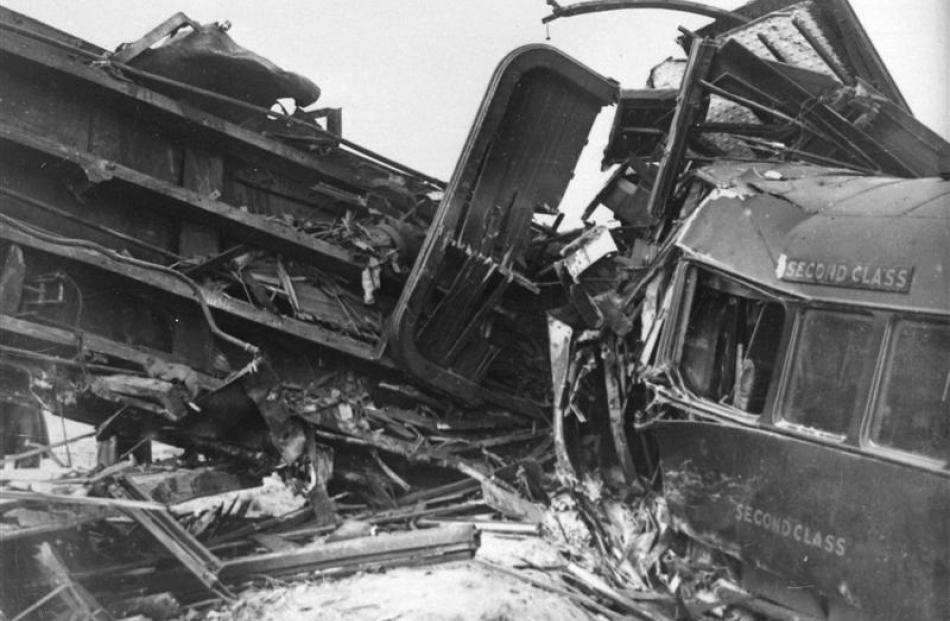 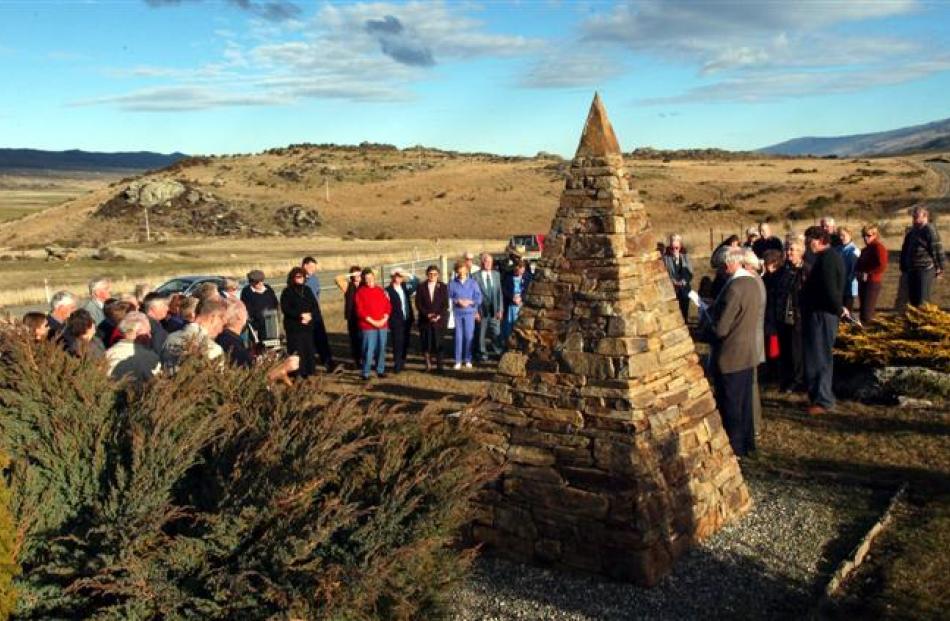 People gather at the memorial cairn on the occasion of the 60th anniversary. Photos from the ODT files.

Coming as it did in the middle of awar, the Hyde railway disaster did not get the attention it warranted at the time, leaving questions unanswered, writes Andre D.E. Brett.

This Tuesday marks 70 years since the Hyde railway disaster. The story itself has been told many times.

On June 4, 1943, 21 people were killed and 47 injured when the Cromwell to Dunedin express derailed in Straw Cutting a few minutes after departing Hyde.

At the time it was New Zealand's worst railway disaster, only surpassed since by the Christmas Eve 1953 tragedy at Tangiwai that claimed 151 lives.

What is less well known, at least not in sufficient detail, are the enduring consequences for survivors, for relatives of those involved, and for the community. Also inadequately understood are the circumstances surrounding the disaster.

Histories of Otago have been surprisingly silent about one of the region's most traumatic moments. Disasters have usually been the domain of journalists, relatives, and well-meaning amateurs rather than trained historians. This is reflected in the writing of Otago's history.

For example, A.H. McLintock fails to mention the disaster in his vast History of Otago. When he wrote, Hyde was the worst railway disaster in New Zealand's history.

McLintock's emphasis was primarily upon Otago's remarkable 19th-century history, but there was undoubtedly room to cover the disaster in his epilogue.

Unfortunately, World War 2 overshadowed the disaster and it was not widely reported.

''The powers that be didn't want a local tragedy to deflect attention from more important happenings,'' recalls Lorna Szentivanyi, who was a child when the disaster killed four of her relatives.

Kathleen Graham, a survivor of the disaster, found that people in Auckland were unaware of Hyde. She gave a presentation about what happened.

''It went down like a lead balloon,'' she says. The audience was full of blank faces.

Most surprising of all was the failure to mention the disaster in a local Hyde history written to coincide with the local school's centenary in 1969. Maurice Prendergast, later a Dunedin city councillor, lost his grandfather Jack O'Connell in the disaster and wrote a chapter for the book.

However, the chapter was rejected. Prendergast recalls a collision of personalities, and the desire of one individual to remove content that was unfavourable towards the railway bureaucracy.

Mere mention of the crash inspired a surprisingly vehement reaction that Prendergast describes as a ''toxic episode''.

Omitting the disaster may have calmed local tensions, but it was not a good outcome.

Time, however, does not heal all wounds. The matter of allocating blame for the disaster remains sensitive. Was the driver, John Corcoran, at fault?

''There was a good deal of anger at the accident,'' says Szentivanyi.

''At the time the driver received most of the blame.''

Graham echoes this theme of bitterness. After all, she says, ''who's in charge of the train?''.

The board of inquiry into the disaster found Corcoran guilty. They were persuaded Corcoran was drunk and drove his train recklessly, handing down a three-year sentence.

''The drunken state of the crew was the direct cause of the needless carnage and loss of life,'' he states emphatically.

He vowed to never drink alcohol. Seventy years later, he has kept this vow.

Some stories collected by Elizabeth Coleman in the moving booklet Stories of the Hyde Railway Disaster reflect this attitude. One relative of a victim emphasises that ''Doc have got it wrong on their signs. An accident is something that can't be helped! It was a disaster ... [it] should not have happened.''

Another relative felt Corcoran's sentence was ''paltry'' and ''a gross miscarriage of justice''.

Others are more circumspect. They believe that responsibility cannot be solely pinned on the driver, and the broader wartime context must be appreciated.

Coleman believes Corcoran was a convenient scapegoat New Zealand Railways (NZR) could offer angry relatives. Due to the war, train crews were pushed to the limit and maintenance was run on a shoestring.

''It was useful to NZR to use him for people to blame,'' she says.

Bob Stott, in widely reprinted remarks written in 1991, echoed the theme of intense pressure. In his words, this is ''part of the answer - but not an excuse''.

History is never simple or easy. Disasters in particular are messy and highly emotive affairs. Greg Mason has recently published a book, An Accident in Waiting?, about the cause of the disaster. It is one of the most thoughtful and well-researched publications on a New Zealand disaster.

Mason finds flaws in the board of inquiry's verdict. Corcoran did drink beer the morning of the disaster, but evidence regarding his level of intoxication is conflicting and inconclusive. Was he sober or drunk? Mason concludes the evidence is probably in Corcoran's favour.

Speed was the key factor in the derailment. But was the train's speed abnormal? The inquiry was not presented with evidence that numerous other trains had recently traversed the same track safely at equal or higher speeds. Mason also finds estimates of the train's speed at the time of derailment were exaggerated.

A definite conclusion, unfortunately, is elusive. Corcoran, like most locomotive drivers, was overworked, under-rested and had to perform lengthy shifts. How severely was his judgement compromised by wartime demands on railway personnel? We shall perhaps never know.

Ultimately, the choice to blame remains a highly subjective, sensitive topic, be it directed at Corcoran, NZR, or the war.

Bitterness runs deeper than just a blame game. The allocation of compensation has also been the source of enmity. Coleman notes that although her mother, as a widow, and her brother, as a survivor, were compensated, Coleman's plight as a traumatised relative of victims was not acknowledged with compensation.

Some families were left impoverished after their primary breadwinner died in the disaster. They felt they were granted inadequate compensation, while other families who were not placed in severe financial distress by the disaster received equal or greater sums.

Prendergast suggests that this is part of the reason why many of the local community drew a ''barrier of silence'' over the disaster. It was a close-knit community.

Silence, Prendergast says, was ''the only way they could become unfettered from their bitterness''. Thus the 1969 decision to remove the disaster from the local history book becomes more explicable.

Some accounts recall that a few pints of beer were enough to pull them through. Others report enduring struggles. Coleman eventually sought counselling decades later.

Building a monument was a significant moment of healing. In 1991, a stone cairn was placed near the disaster site. Some families felt memorialisation should have happened much sooner.

''It should not have taken an active group of victims' relatives to finally have it erected,'' Szentivanyi says.

The cairn is an essential remembrance of the past, a physical manifestation of an event that had become folkloric. A tragedy once shrouded in silence and bitterness is now publicly acknowledged. With public memory comes quiet dignity. The cairn now stands as a silent sentinel to the suffering of all those involved.

I have my own connection to the disaster. I am descended from John and Mary Frater; John was killed in the disaster and Mary gravely injured.

Their daughter, Irene White, and her sons Desmond and John White also died. I am also descended from a survivor of the Tangiwai disaster, Ted Brett. I suspect my descent from survivors of New Zealand's two worst railway disasters is unique.

What does it mean to me? I was born decades after the disasters. They are not a source of bitterness. I do not feel the desire to blame anybody for what happened to my family.

Rather than a source of repulsion, the disasters are a potent link with New Zealand's past. This is reflected in my work as a historian.

If anything has shown me the importance of public works to New Zealand history and society, it is realising how both sides of my family were affected by their interactions with the railway.

The disasters ensure I am keenly aware of the human dimension of our history. When I see the names of four family members on the stone cairn near Straw Cutting, something profound resonates inside me.

''To live in the present you look in the past,'' Coleman says. I agree. At Hyde, lives were changed irrevocably.

The last words rightly belong to Jack O'Connell as remembered by Prendergast. O'Connell survived the initial accident but his injuries were fatal. Before he died, he took the hand of 4-year-old Maurice.

''Little fellow,'' he said, mustering the last of his consciousness, ''I've taken some knocks in my time, but this was a big one.''

It was a big enough knock to echo well into the 21st century.

Andre Brett is a PhD candidate in New Zealand history at the University of Melbourne, where he is also a tutor and occasional lecturer. He has been researching the Hyde and Tangiwai railway disasters, which respectively mark their 70th and 60th anniversaries this year - June 4 for Hyde, December 24 for Tangiwai. To contact Mr Brett, email adebrett@unimelb.edu.au