Coming at midlife from another angle 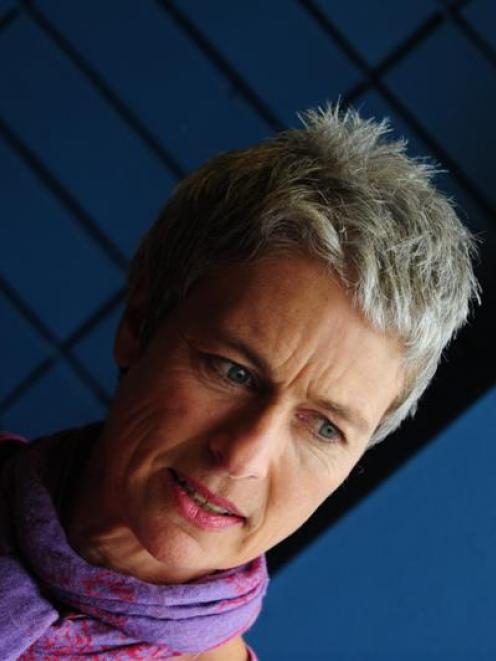 This is really a book that happened rather than a work of fiction, says writer Penelope Todd. Photo by Craig Baxter.
The much joked-about midlife crisis can be unsettling when you actually go through it. Penelope Todd knows, and her latest book, Digging for Spain: A writer's journey, records her experiences, she tells Charmian Smith.

I do know I feel quite passionately about wanting other people to know that these things are ways of attending to ourselves. Digging for Spain virtually wrote itself, Penelope Todd says.

Best known as an author of eight books of young adult fiction, she has now produced an adult non-fiction book, an account of her experience of inner change through seven years from the late 1990s.

"This is really a book that happened rather than a work of fiction where you really know you are working through it and you are going to solve everything," she said.

She started writing it tentatively when when she was awarded her first overseas writer's residency and went to Spain, in 2005.

Then she realised she was having "neatly arranged flashbacks".

"Not flashbacks exactly, but something like that, and they began to take an order that perhaps would be lacking if you tried to sit down and look back," she said.

"The way I've written [the book] makes it look like a coherent journey but life never feels like that. Hindsight is a wonderful thing."

Digging for Spain is an intimate, personal book, but she felt if she could tell her story with enough objectivity and sensitivity, it could be universal, because many people go through similar experiences - and she needed to pull her thoughts together about what happened to her, she said.

"I suppose you only make that sort of conclusion when it's over - that was my midlife transition or whatever.

"In fact, it's feeling lousy, or feeling stifled or frustrated how things are not going. You are not looking at the big picture."

"When I look back now, I see I was much flatter in those years.

"I feel now that life has so much texture it gets a bit overwhelming at times, but I would rather it was this way."

Todd, now 49, was a nurse and a mother of three children who were teenagers at the time and, like many women, felt she should be a carer, looking after her family and all the other people in her life.

She was beginning to experience physical symptoms and her nursing background led her to give them the direst prognosis, she said with a laugh.

"Those who talk about subtle body and interconnecting plains of energy would say `Of course'.

"I think we are so disintegrated in our understanding of physical and spiritual selves that we think of the body as a separate thing that can be treated by a doctor."

The danger is that some people going through a midlife crisis can get sick or depressed, and she would probably have done so if she had not noticed what was going on and looked to see what she could change, she said.

"I think we make so many unconscious decisions when we are younger, and not always the best ones. [We think] `Somebody expects this of me; I should do this,' or, `I need to go to university.'

"It might be entirely the wrong choice but it gets you on a track and then you wake up one day and say, `This is not really what I need to be doing.' It's what one comes to expect from oneself for whatever reason."

Some years ago, she was involved with an evangelical Christian group with a narrow view of spirituality which seemed to be restricting her, she said.

"Basically, it was going from a child's view of God-out-there to a sort of grown-up view of God - if you are going to believe in a God.

"The spiritual component was an important part of my life and that's never going to disappear in one form or another, but when the book finishes, I'm pretty open."

Writing became important and she found time when she could on the shared family computer.

After her first book was published, she gave up nursing, instead working part-time as an editor and writing.

Since 1999, she has had eight books published.

From being known as Penny, she changed her name back to Penelope, and took her maiden surname.

"It was a kind of organic happening - it just began. It's more an experience rather than something you decide on," she said.

She also found psychoanalysis helped her sort out what was happening to her.

"It's finding deeper and wider things which are probably hard to pursue if you are not doing things that are really satisfying or if you have blocked off certain capacities."

Describing herself as an incurable optimist, she trusted that life actually had some purpose, or some benign pattern or structure, she said.

However, the process of disintegrating and reintegrating oneself was unsettling and unnerving, but once she was aware it had happened once, she realised it happens all the time in life.

Now, she has become aware of what is going on within herself, she said.

"At the start of this seven years, I wasn't. I was often baffled about what was going on for me, what my feelings were, what I wanted from a situation. It was very unclear.

"That's been a wonderful thing to happen from that time - I usually know now what's going on with me, which is pretty helpful, and for other people because if you are in a muddle, you draw other people into the muddle."

During a crisis, people sometimes separate from their partners, but Todd said her whole family had been affirming, if a little surprised, and that had put her fears at bay.

And the support of two or three close friends was also important.

"I'd be in deep soup without them," she said.

Digging for Spain is a very honest book.

She wanted to write what was happening truthfully for her own sake, but once it was all written, it seemed wrong to cut anything out, she said.

"There were things I chose not to tell, usually because they involved other people and I didn't want it in any way to be a prurient read.

"I suppose a certain objectivity is a writer's shield, in a way.

"I do feel vulnerable, but I don't think they are things I'm in any way ashamed of or things I'm going to renege on or want to hide away in the long term. They are part of who I am.

"I do know I feel quite passionately about wanting other people to know that these things are ways of attending to ourselves. They are available to all of us, and they are simple in a way and complex in a way.

"They do require some decisions to slow up and . . . allow ourselves to pay attention."

- Digging for Spain: A writer's journey by Penelope Todd is published by Longacre (pbk, $30).