Don't like the country you live in? Start your own 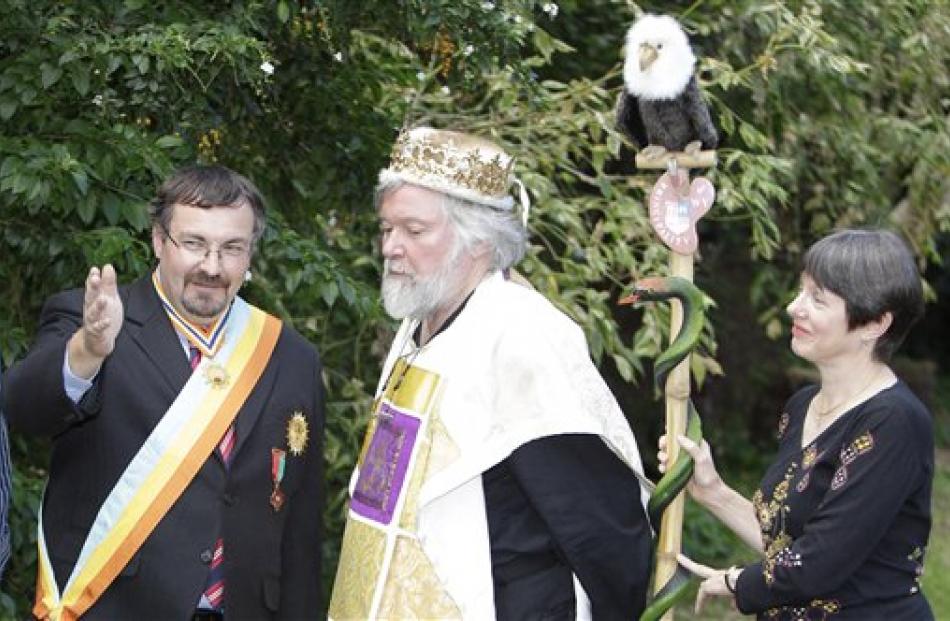 Self-proclaimed Imperial Majesty George II of the Empire of Atlantium (left), with self-proclaimed Prince Paul Delprat of the Principality of Wy,and his self-proclaimed princess Susan at Australia's first conference of micronation leaders. Photo by AP.

The Empire of Atlantium's imperial botanical gardens consist of one bush, and Government House is a 30 square metre steel-sided affair, boasting bunk beds and an art deco radio.

"It's modest," His Imperial Majesty George II says, "in keeping with the emperor."

His Majesty raises the flag of Atlantium, its orange, blue and yellow meant to represent the dawn sky.

"Behold the future!" he bellows, gesturing to the surrounding valley that makes up his 188-acre empire, where just over the hill with the dead tree you'll find the Australian border.

He's grinning, but he's serious. Just like most of the other few-hundred-or-so citizens of the world who have founded their own micronations - quirky self-declared countries that claim independence, even if no international body recognizes them.

Some boast their own currencies, constitutions, stamps and visas. Many exist solely in the minds of their makers; others range from a London apartment, to a patch of Outback farmland, to a rusty military base in the North Sea. They are created out of frustration with the establishment, or to prove a political point, or to just get a few laughs.

Technology has brought them out of isolation, with the Internet transforming some nations of one into global communities of thousands. Last month, a Sydney university sponsored a micronations conference, the first of its kind in Australia, a hotbed of DIY countries. Travel guru Lonely Planet has even published a guidebook - Micronations: The Lonely Planet Guide to Home-Made Nations.

For some micronationalists, it's about taking their identity back from the state, for others it's about righting a perceived wrong. At the heart of the movement, though, is modern individualism, says sociologist Judy Lattas.

"It's always possible to do things differently and to do it yourself - and that's what I think is the pleasure of it and the wonder of it," Lattas says. "There's pleasure in the daring of doing it yourself."

"Is my crown straight?"

Princess Susan of the Principality of Wy reaches out to adjust the bejeweled golden crown resting on the head of her husband, Prince Paul.

In her other hand, she clutches the staff of Wy - a green rubber snake wrapped around a bamboo pole, topped with a stuffed eagle.

The princess' lips are quivering with a barely-contained smile. The community hall, full of micronationalists who have convened for a conference on tiny Dangar Island, 60km north of Sydney, is buzzing with laughter. The room is adorned with flags, coins and literature from places called Snake Hill and Hutt River, and a man kneeling in the corner warbles a mournful tune on a Japanese bamboo flute.

Swathed in a royal robe, Prince Paul (aka Paul Delprat, a 68-year-old art school principal) is delivering a history of Wy that is pure theatre - a little Monty Python, a lot funny. (Do you pay rates to the local council? he is asked. "We give a 'gift' every year," he responds.) Humour has been his weapon in a 17-year battle for council approval to build a driveway to his home.

In 2004, after years of bureaucratic bickering, Delprat informed Sydney's Mosman council he was seceding. He formed the Principality of Wy and declared himself ruler. His wife, children and two rabbits comprise the rest of Wy's population.

He's still waiting for that driveway. But Wy has proven cathartic, he says. It's a way to express himself and ease the pain while having fun.

"With equal measures of courage and humour, the citizen of the world is armed against adversity," he says. "You can't fight humour."

Like most government officials viewing micronations from the outside, Mosman's mayor is dismissive.

"I look at it with a degree of wry amusement," Anne Connon says. "But it's not of any great importance."

Delprat's case is typical of many micronations. Often, it starts with a feeling that one has been wronged, says Macquarie University's Lattas, who helped organize the conference.

"And then," she says, "it morphs into a political movement."

Case in point: Prince Leonard (formerly known as Leonard Casley) of the Principality of Hutt River, Australia's first micronation, which celebrated its 40th anniversary on April 21.

In the 1960s, the farmer became embroiled in a dispute with the state government over restrictions on his wheat quota. When his arguments went unheeded, he decided to secede and create a country with a government that would listen - because he would govern it himself.

His 75 square km plot of farmland in Western Australia has grown into a tourist attraction, boasting a bust of the prince, a national anthem and passports. Australia largely ignores him, including the time in 1977 when he declared war against his Down Under neighbor. (Receiving no response, the prince ordered a cessation of hostilities a few days later.)

It's all done with a wink, acknowledges William Pitt, author of a book on Hutt River, An Australian Monarch.

But Pitt insists the prince is serious - and perfectly sane.

"Politics is theatre anyway," Pitt says. "Not just with micronations."

The popularity of Hutt River may explain why Australia has such a high concentration of micronations - most micronation experts count at least two dozen. Others theorize the country's convict roots and subsequent distrust of authority play a role.

The Kingdom of Redonda, founded on a tiny Caribbean island in 1865, was among the earliest micronations, and hundreds more have followed. Those pushing a political message are among the most serious, such as The Gay and Lesbian Kingdom of the Coral Sea Islands, founded in response to Australia's ban on gay marriage.

Serious, too, are the leaders of Sealand, a rusting World War II base off the coast of England; they once fired warning shots at a British navy boat that ventured too close.

And then there is Kevin Baugh, President of the Republic of Molossia - which consists of Baugh's 6.3 acre property southeast of Reno, Nevada. The republic bans smoking, catfish and ANYTHING from Texas ... except singer Kelly Clarkson.

With its "railroad" of model trains, "navy" of an inflatable boat and currency, the Valora, linked to the value of Pillsbury cookie dough, he's clearly in it for fun.

Still, the 47-year-old human resources recruiter says that amidst all the wackiness, there lies a lesson: If the world you live in isn't representing you the way it should, represent yourself.

"Examine your world around you - your government, your country, your fellow citizens," he says. "Step outside of it a little bit and think, 'What am I doing? Could it be done better?'"

"We are all mad to some extent"

Outside the two-story, 134-year-old hotel, in a town called Mittagong about 130km south of Sydney, a clue you're entering someplace different dangles from the mailbox. "BRAEMAR LODGE," reads the sign. "PRINCIPALITY OF DUBELDEKA."

At the door stands a smiling Prince Vasudeo "Vas" Khandekar. The 76-year-old, Indian-born veterinarian welcomes his guests inside, where he issues freshly-stamped visas.

Light pours in through stained glass windows, illuminating hundreds of dolls that blanket the room. Out back, pigeons are cooing in their coop.

"Do you want me to put the tiara on?" the princess asks her husband, who has just taken a break from playing an antique foot-operated pianola to settle into his marble and rosewood throne. The Chinese symbols on it, he explains, mean happiness and good luck.

The Khandekars didn't have a whole lot of either before they embarked on the road to royalty. In 2000, they learned the local council wanted to lay a sewer pipe through their property, which the couple says would have destroyed the fragile hotel they wanted to restore.

They pleaded with officials, wrote letters, made endless calls. Vas' health began to suffer. When the bulldozers came, Doreen sat in front of them to block their path.

She had always been a little different. So, too, was her solution - secede like that Hutt River farmer. Dubeldeka was born, along with its motto: "Tenacity is our virtue."

The council eventually agreed to place one pipe on the outskirts of their property. It was not the fairytale ending they'd wanted, but better than running the lines closer to the hotel.

"People are apathetic and they shouldn't be," the princess says. "People can stop things that aren't right."

Still, their new lifestyle was met with puzzlement and contempt from some, Prince Vas says. Many thought they were crazy.

"Eccentricity is something which is present in everyone," the prince says. "We are all mad to some extent. But we live in a sane world. We hope."

There's a popular belief that most micronations are started by 15-year-old boys. In the case of George Cruickshank, that was true; the difference being that his empire outlived his adolescence - and is still running, 29 years later.

The Empire of Atlantium began in 1981 as an idea between friends on how to make a positive impact. Today, it is an umbrella organization for globally-focused free-thinkers, a progressive lobbying group, Cruickshank says.

But he insists he's not a politician.

He sells information technology, too, in his day job as a 43-year-old upstanding Australian citizen. (Like all Atlantians, he has dual citizenship.)

Someday, he hopes to turn Atlantium into an ecotourism destination, with cabins, a house of contemplation and a monument. But he's not looking to be a hermit and has never tried to secede.

He wants to be part of society - and to grab its attention for his ideas. Among them, that nations defined by geography or ethnicity will become obsolete. Atlantium, he says, is another option for people who don't fit the culture into which they were born.

The empire now boasts 1300 citizens in 100 countries, Cruickshank says - most of them liberal, intelligent people who share Atlantium's beliefs and goals, such as the right to an abortion and the right to die.

He encourages his citizens to liaise with their countries' governments, and he often sends position papers to world leaders.

More simply: George Cruickshank may not command much attention. But His Imperial Majesty George II does.

"I guess what micronations teach us," he says, "is you can have an impact outside society's norms."