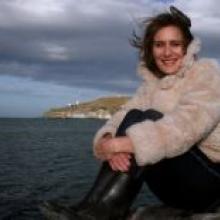 Author Louise Moulin found Aramoana to be the perfect place to write her book. Photo by Nigel Benson.
The young author wanders along the Aramoana foreshore in faux fur coat and gumboots, her hair flying in the sea breeze. Seagulls sail overhead and foam bursts playfully around her feet. Nigel Benson meets Louise Moulin.

It's not easy to write a story about Louise Moulin. She is a woman of many parts.

A former air hostess, who drove trucks on The Lord of the Rings. A freelance feature writer and professional actor, who now works in the Fortune Theatre marketing department.

Moulin also has a publishing contract with Mushroom Music.

Now she has written a book - her first book - Saltskin.

‘‘I always wanted to be a writer. When I was a girl, Mum gave me books for Christmas, rather than frilly skirts. But, it wasn't 'till the summer of 2002 that it occurred to me that I might have the ability to write a book,'' she recalls.

‘‘I was sitting in Avanti, a cafe in the Queenstown Mall, writing in an exercise book I always carry around with me, when I had one of those epiphany moments.

"It was a real shock when it happened. A sudden moment of clarity.''

Moulin describes Saltskin as ‘‘a tale of doomed love''. ‘‘But, it's more of an historical novel than a romance. Both boys and girls seem to like it, which is great.''

The book intertwines two disparate lives, 300 years and 20,000km apart. Angelo is a young man racked with loneliness and grief, living in 18th-century London, who becomes obsessed with the portrait of a woman in a tapestry.

Gilda is a pragmatic, self-assured young woman living in modern-day New Zealand, who has armoured her heart against life and its cruelties.

The book is already being critically acclaimed as ‘‘a compelling first novel'' and is about to be nationally serialised and dramatised on National Radio.

Saltskin was snapped up by the first publisher Moulin sent it to.

Moulin (37) grew up in Gore and spent 10 years in Queenstown before moving to London, where she had a variety of jobs, including writing poetry for wordstruck lovers on Valentine's Day.

‘‘I came back from England in 2003 to write the book. I was looking for somewhere by the sea to work on it. Then, one day, I drove out to Aramoana. It felt very inviting. It was all families, blue skies, blue sea and children. I knew it was the place I wanted to write my book, so I left notes on deserted-looking houses to see if I could rent them.''

She moved to ‘‘a cottage just over the sand dunes from the sea'' in Christmas, 2005.

‘‘It was like a writer's residency. Just me and the isolation and wilderness of Aramoana. I avoided everyone for the first few months, so it was incredibly private.''

Moulin started the book late in 2006, and it was completed within three months.

‘‘It got hold of me and wouldn't let go. I just knew I was on to something. It was a real journey. It was like weaving . . . holding the threads of the story on your fingers,'' she says.

‘‘Nobody really believed I'd finish it. I didn't believe I'd finish it. But, I had determination and I knew I had to do it. I was driven. And because your focus is that clear, other people magically appear to help you out.

‘‘The book wouldn't have happened without the help of my friends and family. There were people there for me throughout the whole process. Someone gave me a computer, Mum even gave me a car, because I was driving my old one around unwarranted and unregistered.''

Other friends helped out with food and power bills.

‘‘It was a real struggle financially. I had bread, but no butter. Pepper, but no salt. There were days I was so far behind with the bills I thought ‘Oh my god, they're going to turn the power off'. But, I never gave in. I knew I had to make something of my life,'' she says.

‘‘People wait for the perfect circumstances to write a book, like when they retire or when the kids grow up. But, no matter what your art form is, you've got to make a stand and make it happen. It's a Hollywood-or-bust sort of thing,'' she says.

‘‘With every art form, there's some sort of resistance. Like when you rub opposite ends of a magnet together. Whenever I got stuck, I'd stop and compose a letter to Janet Frame and Katherine Mansfield. ‘Dear Janet and Katherine, What would you do?' I'd write.

‘‘I imagined seeing my book on shelves in bookshops. I saw myself at book signings.''

Life hasn't been all smooth sailing for Moulin, although she readily accepts that has added depth and texture to her writing.

Life can only be lived forwards and understood backwards.

‘‘The impetus for the book was a failed love affair, which I thought had ruined me for all time. I thought I'd never be the same. When I fail at something I've learned to counteract that with something that will give me a sense of achievement. You just have to do something to turn it around,'' she reflects.

‘‘A friend told me a story a long time ago about a young girl who went to a beach, took all her clothes off and walked into the sea to commit suicide. She just kept walking until she drowned. That imagery had a very powerful effect on me. I've never forgotten it.''

Moulin's diverse and colourful background has undoubtedly contributed to the novel's success.

‘‘I suppose it's a reflection of what I was thinking out there. I think of it as allegory, really. With writing, you get better at it the more you do it. But, acting was fabulous for my writing, too [Moulin graduated from Wellington Performing Arts Centre Drama School in 2001]. You learn so much about characters as an actor and that transfers to writing. You get involved with the characters and you get a great understanding of how they're likely to behave,'' she says.

‘‘I love the book and I've loved writing it. It's given me moments of euphoria and I still get little surprises when I pick it up and read it. It's changed my life, really.''

Moulin is now working on her second novel and a play.

Saltskin is published by Random House (RRP $27.99) and will be released next Friday, March 7.