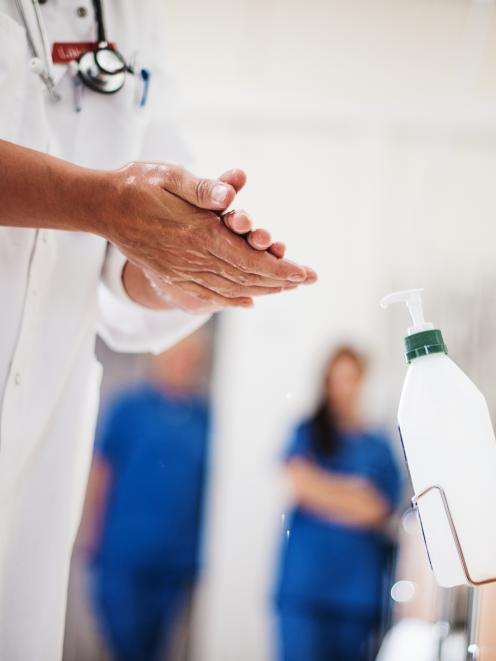 Photo: Getty Images
Do you use the hand sanitiser when you visit a hospital or rest-home? What would make you more likely to do so? Would a voice-prompt work, asks Pauline Norris.

If you don't use the hand sanitiser, you are not alone. David Birnbach and his colleagues at a university hospital in Miami watched more than 2000 hospital visitors and found only 0.52% (one in every 200 people) used hand sanitiser. They looked at previous studies, and found that even in paediatric and neonatal intensive care units, where people are visiting seriously ill babies and children, rates of hand sanitiser use did not exceed 60%.

In New Zealand, a study by Nick Wilson found that even in the middle of the 2009 influenza pandemic, only 18% of people walking through the entrance to Wellington hospital used hand sanitiser. This was a mixture of hospital staff and visitors. In the summer, after the pandemic, the rate dropped to 8%.

So why should we use the hand sanitiser?

When people are sick they are particularly vulnerable to infection. Infections people catch in hospitals make them sicker, and usually make them stay longer in hospital. Up to 10% of people in hospitals catch some kind of infection there.

People often assume that the germs causing infections in hospitals come from the hospital itself or from other patients, but it is very likely that some come from visitors. This may include antibiotic-resistant "superbugs". These might be living happily on or in visitors, not causing them any problems, but then cause illness when they are brought into the hospital or into a rest-home where there are many people with compromised immune systems living and sleeping close together.

Handwashing is a key strategy to reduce the spread of germs that cause infection. The World Health Organisation, the Centres for Disease Control in the United States, and the Ministry of Health in New Zealand all strongly recommend increased handwashing to reduce infectious diseases and to control any future pandemics. In New Zealand, the Health Quality and Safety Commission has worked successfully to increase handwashing by hospital staff.

Birnbach and his colleagues in Florida experimented with different ways to try to improve hand sanitiser use in their hospital. First they looked at the placement of the hand sanitiser. People visiting the hospital had to register with a security guard at a desk. The dispenser was on the wall about a metre away from this, next to a sign saying "Clean hands here" in English, although many of the visitors were Spanish speaking! Then they tried a sign saying "ATTENTION! All visitors MUST clean their hands" in English and Spanish, placing a freestanding hand sanitiser dispenser in front of the security desk, or both. All this effort did lead to some improvement in use of the hand sanitiser, but only to 0.67%, 9.33%, and 11.67%, respectively.

So even with the new dispenser and two bilingual signs, only about one in 10 people used the hand sanitiser.

In the United Kingdom, Morkos Fakhry and colleagues took this to a new level, and installed electronic motion-sensor audible reminders at the entrances to hospital wards. When the motion-sensor was triggered an electronic voice said "Please clean your hands with hand rub when entering or exiting any clinical ward". This was targeted at staff and visitors. Before the reminder system was installed 10% of visitors used the sanitiser, and this increased to 63.7% afterwards. This is a very substantial improvement but it seemed to be wearing off a little after three months. Maybe it was the novelty of an electronic voice that led people to obey.

All of these approaches to improving hand-sanitiser use seem to assume that the problem is forgetfulness. But there are likely to be other reasons for low use. Do you use the hand sanitiser when you visit hospitals or rest homes? If not, why not?

Pauline Norris is a research professor at the Centre for Pacific Health, Va'a O Tautai, and CHeST: the Centre for Health Systems and Technology, in the University of Otago division of health sciences.

No wonder people are getting sick more often, their immune systems are not allowed to deal with the bugs on their own (hand washing with soap and water excepted) but keep being told to use hand sanitiser.

Maybe but many in rest homes and hospitals are very vunerable in terms of immunity, so think of them if not yourself. And no hospitals have hand basins and soap near every door, so be practical and use the sanitiser.