The legacy of a collector 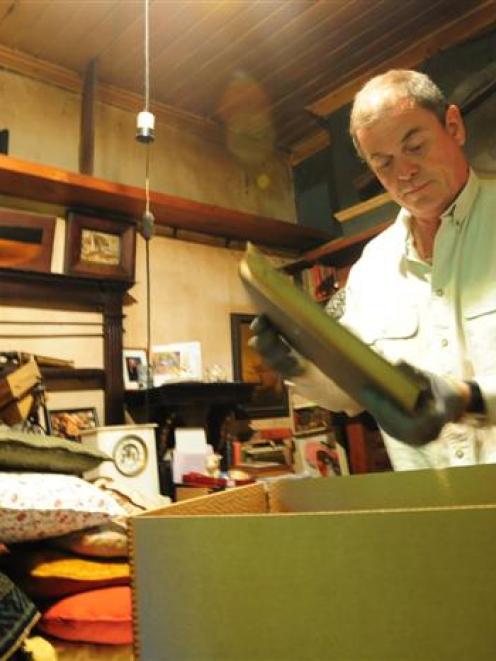 Simon Knight fills cardboard boxes with his father's collections. Photo by Craig Baxter.
Simon Knight half expects his father's house will fall down once he removes all the books stacked from floor to ceiling in every room.

The ramshackle Broad Bay cottage where Hardwicke Knight spent 50 of his 97 years is crammed full of stuff; the legacy of an obsessive collector.

Simon Knight says his father added rooms to accommodate himself and his sister, Deborah, as they were displaced by the ever expanding collections.

Hardwicke Knight's partner of the last seven years, Ursula Stockinger, believes Mr Knight's obsession was born of being the youngest of eight children, with older sisters ever ready to dispose of a younger brother's collections.

Now, that disposal task has been left to Simon, who expects the job will take weeks.

The most valuable items - such as first edition books, cameras, photographs and more than 20 brass microscopes - have already gone.

What is left, beneath the dust and cobwebs include the curios - a dozen or so Dutch tiles found in the mud of the River Thames, a model sailing ship brought from England and stored on a cluttered shelf in the kitchen, medicine jars, skulls, bones, shells and postcards.

And books - How I found Livingstone by Henry M. Stanley, Modern Railway Administration (volumes 1 and 2), Jervoise's The Ancient Bridges of Wales and Western England, and The English Sermon 1550-1650.

But, now it is all going, some to the Hocken Library, much of it to a Sydney auction house where it will be put up for sale.

"That's the fairest thing to do. Debbie and I are both collectors but neither of us have a home that's big enough for a fraction of his stuff."

Simon Knight said that apart from the walks they took together, and sitting around the radio listening to "the Goons", he never saw much of his father who was usually tucked away among his collections working on something.

He had obtained most of his knowledge of his father's find on Mt Ararat from the Internet and noted that there were also suggestions that his father was a British "agent".

"I think it was a load of old cobblers. I don't think he tried too hard to disagree. There was a certain amount of notoriety attached to it. Maybe he was a British agent. I don't know. There was a touch of the theatrical about him, I think."

Before returning to the task of filling more cardboard boxes, Mr Knight suggested that there was a chance he would "bump into" an autobiography somewhere in the house.

"He supposedly wrote up something, but I've not found it. Mind you, it's early days."