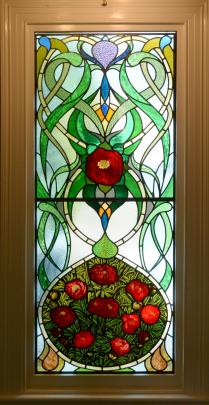 Peonies feature in the new stained-glass window in the stairwell. 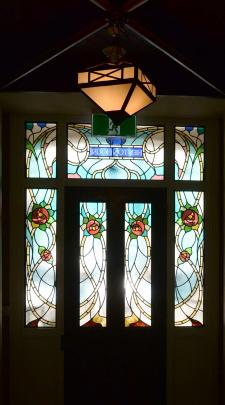 The home’s front door had been removed during its time as a commercial building so a salvaged Edwardian door and stained-glass windows were installed. 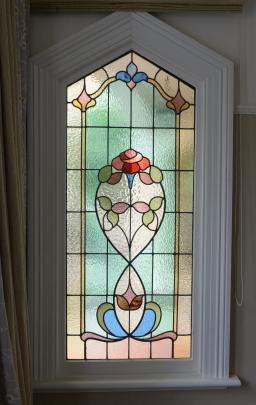 One of two original stained-glass windows that stand either side of the front door.

The  original entrance windows either side of the front door in Dunedin’s Henton House are well-preserved examples of early leadlights made with mouthblown glass.

Peter Mackenzie, who spent about about three months designing and making new stained-glass windows to complement them, says the original glass is mostly English Muffle. This dimpled mouthblown glass was only made in Birmingham from 1830 to 1931 by Chance Brothers, the company responsible for making the lighthouse glass lenses used throughout the British Empire.

Red glass for the rose petals was made by migrant French glassblowers gathering a thin layer of ruby glass, then a thicker layer of clear glass, to produce cylinders of what was known as "flashed" glass, Mr Mackenzie said.

The ruby glass was made from a stretched bubble opened out to form a flat sheet and tended to have a variable colour grading. This provided every shade from rich ruby to pale pink, and varied hues that could provide lighting effects.

Mr Mackenzie used etching, layering and plating techniques in new windows for the front door and stairwell, combining up to four layers of etched glass to form subtle grades and intense colours.

The new panels are designed in a fluid, art nouveau style and continue the theme of the original windows, of stems, flowers and leaves.

The tall window in the stairwell was originally clear glass, affording no privacy. The replacement has a peony bush at the base with densely hand-painted leaves and stems surrounding a cluster of buds and flowers. The stamen details were enhanced with several firings of pigments and the application of a silver stain to turn them golden.

A recycled Edwardian front doorway added sidelights, quarterlights and a deep fanlight. These windows, plus the two door lights, got new stained-glass panels.

The name, Henton House, forms the centrepiece in the fanlight above the door. It was embossed into the blue layer of the mouthblown flashed blue glass nameplate, using hydrofluoric acid.