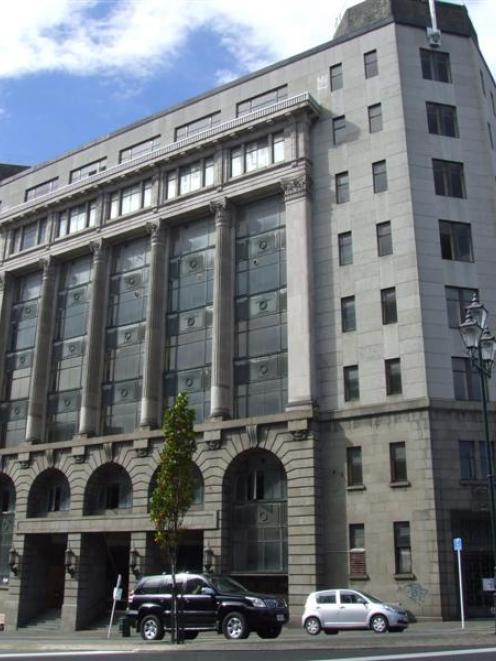 The Dunedin former Chief Post Office. Photo by Bruce Munro.
For 17 years, developers have talked of turning Dunedin's once-grand-now-derelict former chief post office in Princes St into a hotel. But, it has never happened. Mark Price tries to find out if the current owner has what it takes to salvage one of the city's heritage landmarks.

We've been there before.

Step one: out-of-town developer announces plans to turn the old chief post office into a hotel.

Will it be any different with current Invercargill owner Geoffrey John Thomson?

"He will do the right thing by Dunedin, I can assure you of that." 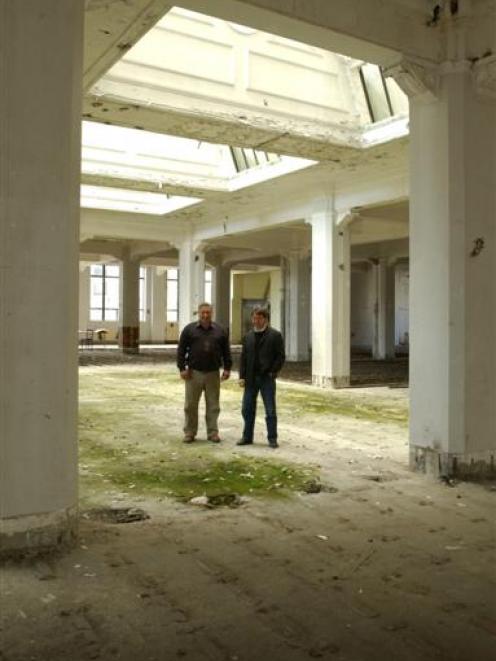 Building owner Geoffrey Thomson (left) and Opus architect Jeff Thompson on the ground floor below the former chief post office atrium in 2004.
Mr Thomson himself would not be interviewed by the Otago Daily Times for this article, citing a desire to avoid the limelight.

But some of his friends and business associates were willing to shed a little light on how this former electronics engineer and aluminium smelter worker operates as a businessman.

One from the Invercargill business community, who did not want to be named, described Thomson as "shy" and "modest" but "very professional".

"I've always found him a very positive person with a visionary outlook for business.

"He has a pretty well-balanced perspective on surrounding opportunity and he works pretty well with the community and other industry as well.

"He certainly is a shy guy.

"He's quite modest in his approach and it's just the way he is.

"I haven't got anything untoward to say about the guy."

Ann Carran, of construction firm Downer EDI, Te Anau, has been doing business with Mr Thomson since the early '90s when he bought the town's Luxmore Hotel.

"There are times, I'm sure, when we haven't been the cheapest price and he's given us opportunities to undertake work and as a consequence we have had a really good working relationship.

"We obviously continue to accommodate our people through his facilities whenever we can.

"He's very much about contra deals and he does seem to look after anyone who stays there.

"He seems to really invest in what he's doing in both the people and also in the infrastructure and the facilities he's got."

One of Te Anau's biggest hotels, the 180-room Distinction Luxmore Hotel appears to have been Mr Thomson's first foray into the hospitality industry.

Dave Philpott says he was working there when Mr Thomson bought the then 98-room hotel from receivers.

"I'm sure he bought it with the thought of turning it around.

"He had a very good vision of what he needed to do to turn it around and he had some very good ideas.

"In the early days, the Luxmore was a wee bit drab.

"He was of the opinion if you really looked after people ... and you kept the rooms spotless, even if they were getting a bit dowdy, and if you fed [the guests] really good food, they would put aside the fact that the Luxmore was getting on a bit.

"That was really the secret. He looked after the people."

When it came time to add a new 51-room wing to the hotel, Mr Thomson bought himself a crane, learned how to use it and ran the construction project himself.

Dave Philpott: "He wanted a hotel but he didn't want one that was made out of wood and bricks. He only wanted a concrete hotel, like a proper one. And he went out and built one.

"And that is what he's done on the other reconstructions and refurbishments at the Luxmore.

"He's been hands-on with the construction process and that way he gets what he wants and he gets it, I suppose, at the right price.

"He makes no secret of the fact he is not a frontline hotel manager and I'm not being rude to him there. He's a guy who employs people to do those things for him and relies on expertise and he gets on with all the things he does best."

Since the Luxmore, Mr Thomson has bought and refurbished the former Tourist Hotel Corporation operation in Te Anau and added hotels in Rotorua, Queenstown, Fox Glacier and Whangarei to his Distinction Hotels group.

Mr Philpott has no doubt Mr Thomson has the ability to turn Dunedin's old post office into another link in his hotel chain.

"We talked about it, Geoff and I. If Geoff says he's going to do something he will do it."

Mr Philpott considers it "very unusual" that Mr Thomson did not carry through the plan the first time he owned the building - between 2004 and 2007 - and believes the problem was a clash with the prison being built at Milburn.

"He couldn't get people to complete it and do it properly and, of course, time went by and he saw an opportunity in flicking it off.

"Probably, reading between the lines, his crystal ball probably told him he could buy it back at a later date at a better price.

But, having bought the post office back again last year, the question also returns: can he make the hotel happen?

Mr Philpott: "It's a gigantic project and I know that behind the scenes he has been working on it very heavily for quite some time.

"I know he's diverting a lot of time and energy into it.

"It is going to happen."

"Geoff sleeps at night. He doesn't worry. It's the amazing thing about him. He's a non-worry person."

He says Mr Thomson had a lot of confidence in himself and was "a bloody good guy to work for.

"He would be the best guy I have ever worked for in my life and I can say that knowing that I'm not having to butter up to him because I'm not going back there again [to the Luxmore].

"Above and beyond everything, he's a trustworthy guy."

Mr Thomson was involved in a brief public skirmish with the Invercargill City Council and the Invercargill Licensing Trust over his thwarted plans to build a 120-room hotel in the southern city.

In May last year, the Southland Times reported Mr Thomson as being "sick of fighting city halls".

He was critical of Invercargill local body politicians serving on both the council and the licensing trust.

"I'm out to grow a hotel chain. I was looking at putting one in Invercargill but it's too hard. I'll just do it elsewhere," he was reported as saying.

His comments appeared on May 26 last year, just 12 days after he had bought the post office building in Dunedin for the second time.

An Invercargill businessman, who did not want to be named, described Mr Thomas as an "Invercargill lad" who was a "pretty enlightened sort of character" who was determined to make things work.

"He assesses situations pretty thoroughly and once he has made a decision he will certainly support that decision and take it through to its natural conclusion.

"He's a hard worker. He started from very modest beginnings and people say he has been very lucky in life.

"But the reality is that he has worked extremely hard and reaped the rewards of that.

"He's a pretty well-respected guy around the place, to be honest.

Mr Philpott says Mr Thomson drives a BMW but "could just as easily drive around town in a broken down old bomb".

"He's on the work site with the arse out of his pants and driving a crane and that's really neat."

"He didn't come from a well-to-do family.

"I understand he bought a flat or a property, purely for the purpose of living in. He tidied it up and he was able to flick that off a while later at a profit.

"Suddenly it opened his eyes.

"That's where it all started.

"He's totally self-made and in my opinion he deserves every success he's had and we've only seen the start of it.