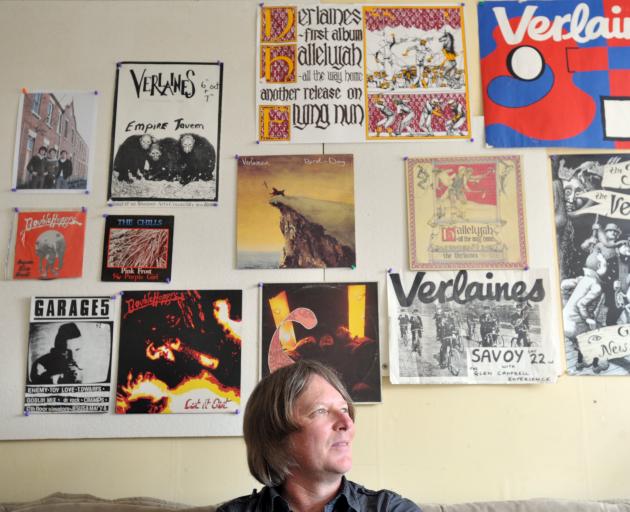 From conversations and critiques to photos and pop-art, a new book on Dunedin’s fabled music scene reverberates with energy, writes Shane Gilchrist.

Ian Chapman, author of a book documenting a purple patch in Dunedin’s musical history, is quick to point out he’s something of an outsider. This despite the fact he’s lived in the city for 19 years.

That close, yet wide, focus is evident in The Dunedin Sound: Some Disenchanted Evening, which serves as both a celebration and evaluation of a selection of bands that helped put Dunedin music on the international stage from the early-’80s.

Around the world, there are a few geographical locations that have an acknowledged "sound" attributed to them. Think Liverpool (Merseybeat), Nashville (a certain style of country music) and Seattle (grunge). So, too, does a relatively small city at the bottom of the world, birthplace of The Clean, The Chills, The Verlaines, Sneaky Feelings, Straitjacket Fits and others.

Within the pages of The Dunedin Sound their feats are revisited via conversations and critiques that draw from band members, fans and those inside and slightly outside New Zealand’s music scene. The book also serves as a pictorial and artistic history or, in the words of Graeme Downes, of The Verlaines, ‘‘a testament to a bunch of people desperate to create something in any way they could. And that something is pretty darn special’’. 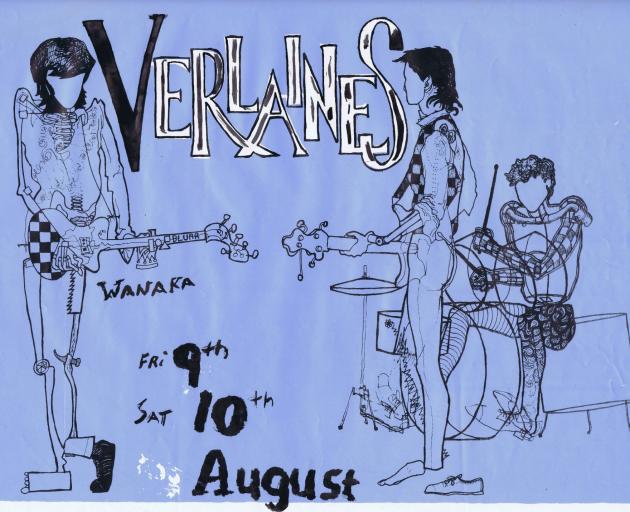 A Charlie Stone tour poster for The Verlaines.

The hardest part of the project was deciding who to leave out, Chapman says.

He’s sitting on a couch in the office of his Dunedin home, which offers various fetching views: beyond his desk, to the horizon, the Pacific Ocean is a blanket of whitecaps; inside, one wall is dominated by posters and band art, fitting given the author and University of Otago music academic devotes much time to the iconography of popular culture or, as he borrows from the late David Bowie, the sound and vision of it all.

"At first, I intended to make it all-encompassing, but when I got into it I discovered there were just so many bands and I didn’t want to only devote a page to each band. So I pulled it back to the main protagonists, if you like.

"And that was difficult. I sought the opinions of many people who’d been involved in the Dunedin Sound to come up with 17 acts. That then gave me the scope to give each a decent chapter.

"Those final 17 came about through various discussions, but there will be contention over the omission of some acts," Chapman says, adding he hopes the inclusion of a liftout poster by Robert Scott (of The Clean and The Bats), which provides a comprehensive family tree of the bands that played in Dunedin between 1977 and 1992, will at least acknowledge the contributions of some of the city’s other original music artists.

"I’m not from Dunedin. I was born in Auckland and was in Hamilton when the whole Dunedin Sound thing was happening. But, in some ways, it has made it easier to come from outside, instead of being part of the scene.‘‘I was conscious, however, of not coming in and saying, ‘this is what happened’.

"That’s why I sought all these expert commentaries from people such as Roy Colbert, who was right at the heart of the scene from the word go; it’s why I got [fellow Otago University music academic] Graeme Downes to write the foreword ... I wanted people who lived here to tell the story."

As Downes notes in his foreword, the Tally Ho! concert at the Dunedin Town Hall last year featured classic Dunedin Sound songs being performed by the Southern Sinfonia alongside invited guest musicians, including several of the original artists and songwriters, to a capacity audience.

"A huge success, this event proved that these are remarkable songs," Downes writes.

"Those oft-quoted signifiers of bands’ initial live and recorded performances are the sounds of composers making do with impoverished circumstances. But what these jangly, reverberant sounds point to is usually a desire to make something sonically large, Phil Spector-ish, but on the budget of three or four people."

Sparked by the punk energy of Chris Knox’s The Enemy in the late 1970s, The Clean’s seminal 1981 EP Boodle Boodle Boodle, the 1982 Dunedin Double album (featuring The Chills, The Verlaines, Sneaky Feelings and The Stones), a pool of young songwriters and musicians from unfashionable Dunedin created a legacy that was largely borne on the spinning vinyl (and later CDs) of Christchurch-based record label Flying Nun.

"I loved it," Chapman says. "I remember the early 1980s was when my record collection stopped being UK-centric and started to include New Zealand content — and it was all from down here.

"I’d go to the Hillcrest Tavern in Hamilton and these Dunedin bands would come through. I’d think, ‘What the hell is going on?’ The music had a special quality.

"The scene was laced with this Kiwi DIY ethos, largely because of financial constraints. That flows from the recording techniques, to the lack of rock star stage presence, to the artwork and posters. Personally, I think there could be an entire book just on the posters and artwork."

Certainly, The Dunedin Sound serves as a reminder of the quality of imagery that accompanied much of the music. Take John Collie, a drummer and Elam art school graduate who completed album covers for a range of bands; he provides a detailed design perspective, including how he arrived at the dark painting that adorns the Straitjacket Fits album Melt (for which he won the 1990 Album Cover of the Year at the NZ Music Awards).

Given Chapman completed a PhD based on the album covers of David Bowie, The Dunedin Sound was always going to have a large element of art. Initially envisaging a 50/50 split between text and pictures, he made a public plea for images, "through the Otago Daily Times and online and word of mouth", and started receiving gems that had lain in drawers for 30 years.

"That’s when I realised that this book was a chance to preserve some visual history. Thus the book is more like 30% text and 70% pictures. There are about 250 pictures, a good number of which haven’t seen the light of day."

Chapman’s book also addresses the issue of what comprises this "Dunedin Sound", a term he concedes is quite contentious.

"I can understand the arguments. For instance, how do you compare The Dead C with The Stones, or The Chills with The Clean?

"But I took the view that is a pointless argument. The term is established in popular culture; it exists around the world. I didn’t want the book to attempt to pick the eyes out of the terminology, yet I didn’t want to avoid such discussion either."

Chapman, notably, closes The Dunedin Sound with a chapter penned by Ian Henderson, founder of independent Dunedin record label Fishrider. A drummer (and brother of George, founder of The Puddle), Henderson points out that there’s a downside to all this affection for the "Dunedin Sound".

"It can also mean continual references, comparisons and judgement in relation to music of a long-distant era and expectations about sound and style,’’ Henderson writes.

He points to a 2014 review in respected UK publication The Wire, in which the critic compared a new breed of Dunedin bands on Fishrider compilation TEMPORARY: selections from Dunedin’s pop underground, 2011-2014 to iconic Flying Nun and Xpressway  compilations from 30 or so years before.

"The point of the compilation was to bring some of Dunedin’s new music out from the shadow of the past and show that it stands distinct, representing a scene of its own time, with its own character."

"I wanted Ian’s piece to be last. To show where Dunedin music is at now.

"I specifically asked him to comment on how the new bands regard the term ‘Dunedin Sound’. Some of them do bristle a bit. However, as Ian says, the association with the term is one reason others will give them a listen. It does open doors."

• The Dunedin Sound: Some Disenchanted Evening, by Ian Chapman, is published by Bateman ($49.99). The book will be launched at the University of Otago Staff Club on Thursday at 6pm and will feature performances by Robert Scott (The Clean, The Bats), Martin Phillips (The Chills) and Graeme Downes (The Verlaines). Tickets ($15) must be bought in advance from Paper Plus in the Golden Centre, Dunedin. Books will be available for purchase on the night and there will be a book signing by Chapman and the artists involved.

Ian Chapman has lived in Dunedin for 19 years — five as a student at the University of Otago in the 1990s and returning for 14 more as a lecturer in the department of music, theatre and performing arts, from 2002 until today. He numbers several of the prime proponents of the Dunedin Sound among his friends, and continues to be enchanted by the unique artistic environment that Dunedin offers. A specialist in popular culture of the 1970s, and on David Bowie and the glam rock period in particular, he plays a flying-V guitar and collects platform shoes. The Dunedin Sound is his sixth book.