The thrill of the chase is addictive 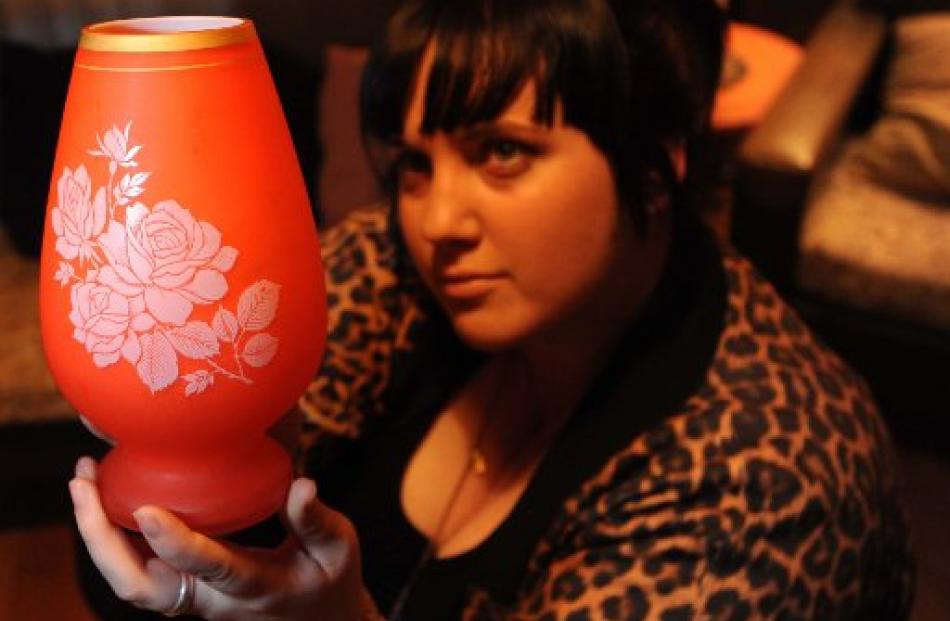 Bargain hunter Emily Cannan with a frosted-glass vase, bought for $3 when she was a teenager. Photo by Craig Baxter.

If she had kept everything she has bought from second-hand stores over her life, Dunedin woman Emily Cannan could easily have filled her home (and her father's carport) several times over with her finds.

The passion started when she was 12, when she would tag along with her sisters to second-hand stores and then with her mother to auction houses, ostensibly in search of shelves to house their many books, but really in search of a bargain.

She blames her parents.

"I wore them, because they were beautiful."

She had 130 by the time she decided a cull was in order, and was using them as art hung from rails on the walls.

However, her passion for second-hand shopping grew, and when she was a first-year student at Art School she "went berserk".

"I just liked to have things. I would go into a store every time I walked past one.

By the time she went flatting, her personal style had started to develop.

She unintentionally drifted towards things from the era between 1950 and 1980, and towards a certain colour palette.

As she collected more and more items, she became more selective.

She would see things in magazines and go to second-hand stores and find similar items.

Over time, she became what she calls an "intelligent purchaser".

Dinner sets, oak cabinets, coffee tables, lounge suites - everything she bought was with the mentality that it was an investment.

Coats, for example, are the only clothing she buys second-hand.

"Coats - Mum always made me look for wool - are an investment and very expensive to buy new. I would buy six at a time."

While not intentionally buying items for resale, a ferocious bargaining spirit has resulted in some luck in the selling on.

The canny treasure hunter says she used to think if she bought the items she loved when she saw them, she would be set up forever and, by the time she bought a house, she would already have everything she needed, and all the best things would have disappeared from the shops. And they have.

"Now it's all really cool, so I got in before that. You can't find anything good in orange these days."

She is not specifically out looking for something most of the time she shops, and often random things find her.

She once nearly cried, for example, when someone brought her a complete unchipped orange-and-brown 1960s' dinnerset.

"It was incredible, perfect."

Everything she owns is good stuff, of course, and there's not just a little bit of it.

She has moved five times in the past four years - a feat that requires many hours and vehicle trips, as well as a lot of help and understanding from her family, and days to pack and unpack.

Once, she would buy whatever took her fancy, or just something for something's sake - she was the queen of the dollar auction, where she would pay $1 for a lot and then have the pleasure of discovering what was in it.

Now, she sees herself as a touch more sensible. If something she loves is still for sale a week later, it was meant to be and will go home with her.

Her love of the old stems from the very pre-loved nature of it, she says.

New things, in her opinion, are often overpriced and of poor quality.

"I don't want to go to someone's house and say `Oh, you've got the same bookcase as me'. That's boring. I love the idea that something was in someone's home. I like things that have a story."

She gets attached to her finds and finds it upsetting to have to sell things - usually for space reasons - she specifically picked to suit her style.

She advices the would-be bargain hunter it is not always an easy pastime.

"You have to go all the time, and you have to be prepared to maybe do a little work on furniture, and go into the grotty-looking stores. And now it's harder to find the pieces you used to be able to - people are catching on."

Her favourite item is an orange frosted-glass vase she bought for $3 from a Salvation Army shop when she was 18.

It is her favourite colour and epitomises her style, and she likes to imagine that in 60 years it will be worth something.

"I always thought of all my crap as my retirement fund."

She also adores an orange space-robot chalkboard dated 1981, which she found in mint condition in a store in Palmerston.

"Everything I have, I have for a reason. Either I use it, or I love it."

Be a regular visitor to second-hand stores.
Visit on a weekday, when the new stock is in and it's quieter.
Look for quality and love an item.
Visit small towns, where gems can still be found.
Always carry cash and a rug and rope in your car.