From the pages of literature 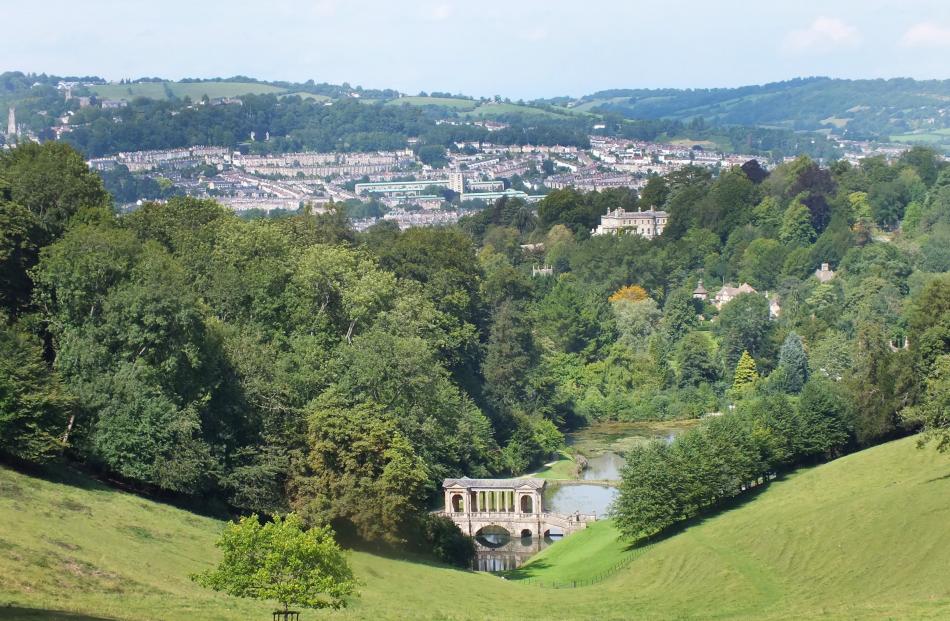 Ralph Allen’s Prior Park looks out over the "white glare" of Bath’s buildings. Photos: Gillian Vine 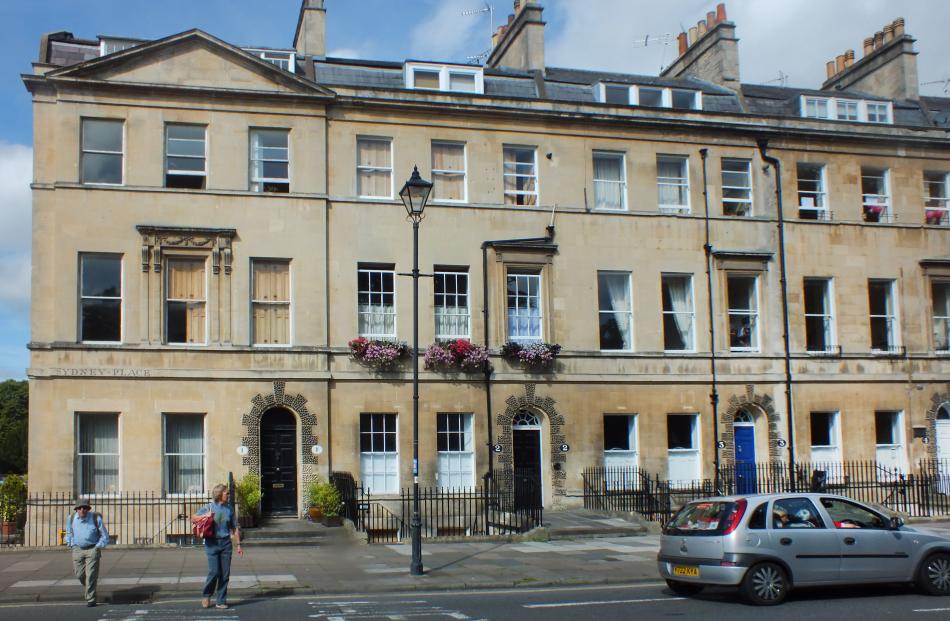 In July, the British marked the bicentenary of Jane Austen’s death with a new £10 note, one of the more impressive ways of honouring a writer whose published work was just seven novels.

Even in Dunedin we waved the flag for Jane, but our celebrations were pallid affairs alongside Bath’s extravagant honouring of the writer, who disliked the English city where she lived for barely five years from 1801-06. 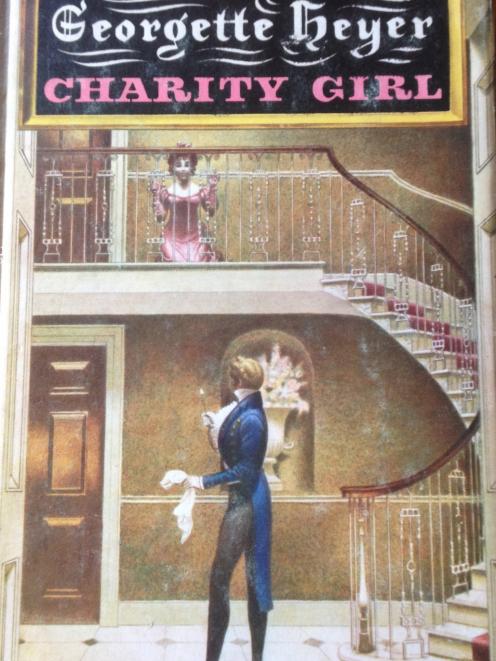 Cherry in Georgette Heyer’s Charity Girl was sent to school in Bath.
To her sister Cassandra, Austin wrote in May 1801, "The first view of Bath in fine weather does not answer my expectations."

In the town, she was said to have been sent by her father to join the parade of husband-seeking women in Sydney Gardens, now the grounds of the Holburne  Museum. It is easy to feel for her, living at a time when a woman’s social standing and financial security depended on having a husband. Although it was not until 1811 that her first novel, Sense and Sensibility, was published, in it — as with all Austen’s books — Bath was mentioned, not always favourably. For instance, in Northanger Abbey Mr Tilney warns recent arrival Catherine Morland that after six weeks in the spa town, Bath "is the most tiresome place in the world".

Austin was not the first Bath writer to explore female identity against a background of English gentry. Satirical novelist Fanny Burney (1752-1840) is now largely forgotten, but her first novel Evelina (1778) is now considered a "landmark in the development of the novel of manners". The young Evelina floundered in Bath society but found it a "charming city".

Austen enjoyed Burney’s novels and it is widely believed that Pride and Prejudice has its origins in the final pages of Cecilia (1782).

Bath was built of local stone, which was not to everyone’s taste, the heroine of Persuasion (1818) complaining of the "white glare" of the city’s buildings, now mellowed to a softer creamy colour. 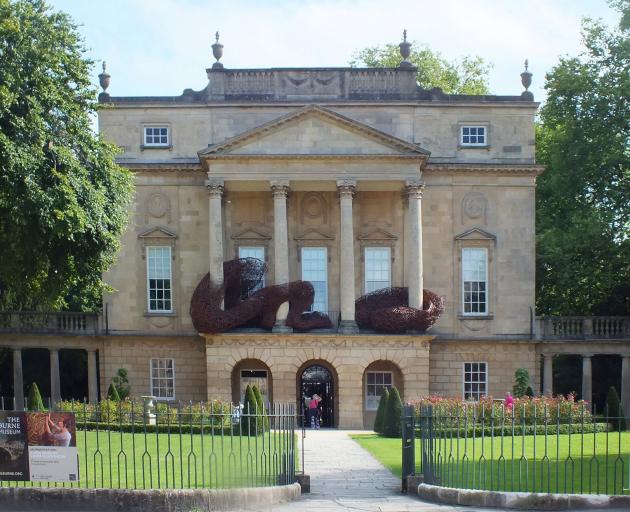 Sydney Gardens, the grounds of what is now the Holburne Museum, were a popular 19th-century meeting place for the romantically inclined.
Stone quarrying had made Ralph Allen (1693-1764) a fortune, part of which he used to erect his elegant mansion Prior Park. Burney and Austen may have visited Prior Park but would not have met the garden’s first designer, poet Alexander Pope, who died before either woman was born. The house is now a school, but visitors can stroll the park, whose final design reflects the influence of Lancelot "Capability" Brown. Because there is no link to Austen, it is a quieter spot in a city whose frenetic homage to the writer can induce migraines, even in the most devout Jane worshippers.

Bath is so hooked on Austen that other writers barely get a nod, although such luminaries as Dr Johnson, Charles Dickens and Samuel Pepys spent time here. The failure to mention them may be deliberate, as they were not always  complimentary, Dickens hating Bath and describing it as a "mouldy old roosting place".

Richard (Beau) Nash had made Bath fashionable in the middle of the 18th century, but although it still attracted numerous visitors, the spa town had slipped to decline in popularity by the time the Austens moved there. This was partly because medical practictioners were recommending sea bathing over "taking the waters" at Bath or Harrogate, and the Prince Regent, later George IV, had moved to the seaside, where his Brighton Pavilion attracted envy and derision in equal measure.

Although the elderly used bath chairs, three-wheeled hooded carriages pushed by chairmen, the younger and fitter walked up the steep hill to The Crescent, or across the Pulteney Bridge and along Great Pulteney St to the Sydney Gardens.

Bath may have suffered a setback after the fashionable set moved on, but with the publication of Regency Buck in 1935, London-based novelist Georgette Heyer began a series of 24 meticulously-researched Regency romances that captured the flavour of the era. These comedies of manners, which have sometimes been compared to Austen’s work, were — and still are — immensely popular. Heyer continued to write Regency romances over a 37-year period, with the last, Lady of Quality, published in 1972, two years before her death. 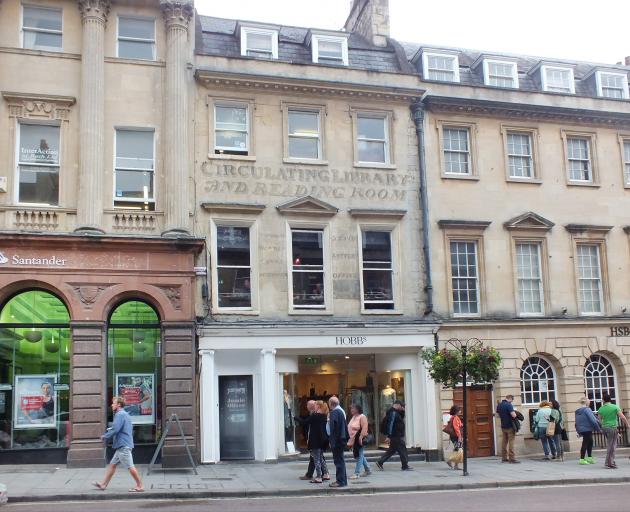 Milsom St, with its libraries and milliners, was popular with Georgette Heyer’s characters.

Bath was the setting for several of her books, notably Bath Tangle (1955) and Black Sheep (1966). In others, there were briefer mentions: girls like Tiffany Wield in The Nonesuch (1962) Cherry in Charity Girl (1970) were sent to school there.

Bath could be a place of banishment: for example, Lydia Daubeney in The Corinthian (1940) was sent to her aunt so she was away from an unsuitable suitor.

Apart from following in Jane Austen’s footsteps, one of the attractions of Bath today is being able to wander many of the streets mentioned in Heyer’s stories. It means dodging the nightmare of modern traffic and hordes of other tourists to check out Milsom St, where young ladies shopped or changed their library books at Duffields or Godwins; take a look at Beaufort Sq where Mrs Floore (Bath Tangle) lived;  and Laura Place, popular for short-terms stays; and Sydney Place, where  Black Sheep’s heroine lived. Here, too, at 4 Sydney Pl, lived the Austens before they moved to Gay St, now the site of the Austen Museum. The Sydney Pl house trades on the Austen name, as it is now a B&B.

Sydney Gardens was not only the place Austen walked from her home nearby but also where  Black Sheep’s Miles Calverleigh missed a rendezvous with Fanny, a reminder of the gardens’ attraction as a meeting places for young women and men.

Then there are Bath Abbey, the Roman baths, the Assembly Rooms, now owned by the National Trust, and the Pump Room, the hub of Bath where mineral water was sold by the glass. There is so much to see that a day is simply not enough. Allow two days to get around all the central Bath sites and an extra day to do things like walk along the Kennet and Avon Canal or visit some of the notable gardens in the area.

Bath’s Hop-on, Hop Off bus (about $25 for a 24-hour ticket) is a useful way to get oriented. For a closer look at the town, take a guided tour (Kirsten Elliott has a good selection; visit www.bathwalks.com/specialtours.php for details) or download one of the free maps that abound on the internet and do your own thing. As a walking guide for Georgette Heyer fans, it’s worth trying to get a copy of Georgette Heyer’s Regency England by Teresa Chris. Published in 1989, it is now rather dated but remains a handy resource.

Unless you are visiting out-of-town attractions, avoid using a car as Bath is the victim of its own success and the traffic is a nightmare.

It was never like this in Jane Austen’s day.